What’s On has video footage of British daredevil James Kingston free-climbing and hanging out above Dubai Marina.

Incredible footage has emerged of a British daredevil getting a bird’s eye view of Dubai Marina – by dangling from the edge of a crane on top of a skyscraper in the emirate. Don’t try this at home!

During the one-and-a-half-minute video, free climber James Kingston walks to the edge of a tall building in the Marina before climbing on top of a crane to the very tip without the use of a rope or harness. 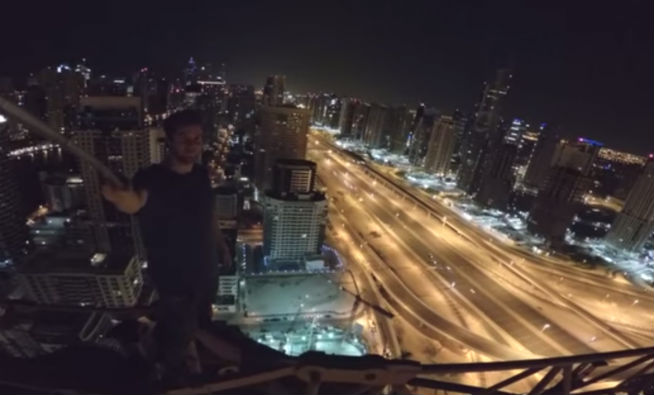 Once at the top, the 24-year-old from Southampton in the UK took in a night view above Sheikh Zayed Road from a camera attached to his head, before cutting to a panoramic selfie.
Check out the video below.

“There’s just so much of Dubai to explore,” said Kingston, speaking exclusively to What’s On after the stunt. “So many new buildings being built, all in funky shapes and sizes.”

“I was up filming for a good few hours. Once I’m up that high it’s hard to come down just because being up there is so enjoyable.”

Outdoor
Sport & Fitness
EDITOR’S PICKS
13 Sheikh Hamdan-approved restaurants in Dubai
READ MORE
Dubai brunches temporarily banned in new preventative measures
READ MORE
12 upcoming Dubai mega-projects we can't wait for
READ MORE
16 of the best beach bars in Dubai for sundowners
READ MORE
MOST POPULAR
Tried and tested: The brand new slides at Atlantis Aquaventure waterpark
You can now bring your pet along to this luxury Abu Dhabi hotel
Bla Bla Dubai launches romantic date night cabana offer
These Dubai roads will be temporarily closed on Friday, February 26
Have unused beauty products lying around? Donate them to this wonderful initiative
YOU SHOULD CHECK OUT
Our website uses cookies and other similar technologies to improve our site and your online experience. By continuing to use our website you consent to cookies being used. Read our privacy policy here.