Abu Dhabi gears up for The Illuminaire, Fire And Light Spectacular

What’s On has details of a special 90-minute light show, The Illuminaire, Fire And Light Spectacular taking place in Al Ain on August 21 and 22, and in the capital on August 28 and 29.

The Abu Dhabi Summer Season gets in full swing this month, with nine (yes, you read correctly) separate shows, gigs and concerts taking place in the emirate. One of the brightest spots on the calendar – literally – is The Illuminaire, Fire And Light Spectacular. The 90-minute light show will host performances on August 21 and 22 in Al Ain before heading to the capital on August 28 and 29.

What’s On spoke to Marc Brouard, creator and director of The Illuminaire, Fire And Light Spectacular, to find out more.

What is the show about? It is a story about light in its many, many different forms. What we’ve done is combine the different lights with dance, acrobatics and special effects. So the show is a mix of performances, special effects and circus acts all combined with the theme of light.

What type of lights do you use? We have black light, firelight, laser light, pyrotechnics and candlelight.

Who is performing? We have some of the best trickers in the world, including the world number one. Trickers are the new style of street acrobats, it’s similar to parkour. We also have dancers, acrobats, gymnasts and four live drummers. So all in all, you’ll see more than 20 performing artists on stage. 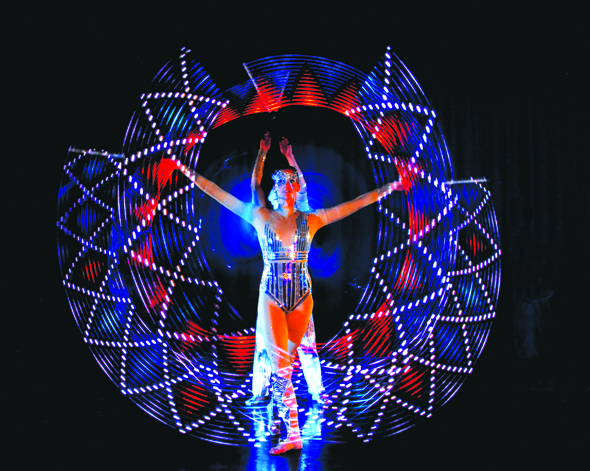 Can you tell us more about your secret grand finale? We’ve got a nice surprise for the show in Abu Dhabi. We will do a little pyrotechnic finale but I want to keep it a secret. It is going to be amazing; people will love it.

Have you ever performed in Abu Dhabi before? We did shows in the UAE around ten years ago for the corporate market, but this is the first time we’re performing a full theatre production in Abu Dhabi. We’re really excited about it.

You started as a street performer. What was your act like? I was one of the first fire dancers in the world. My act was predominantly fire performance, and obviously it included some juggling, lots of talking and lots of jokes.

Why should people see the show?There is going to be something for everyone. It is full of excitement and energy and it’s a good way to escape the heat. Come inside and feel the heat in the theatre.