The Dubai Marina whale shark nearly broke the internet over the weekend: here are five other whale shark encounters caught on video across the UAE.

The whale shark that popped by Dubai Marina on Thursday became quite the overnight celebrity (we just hope he/she managed to swim back out into the wide ocean easily). 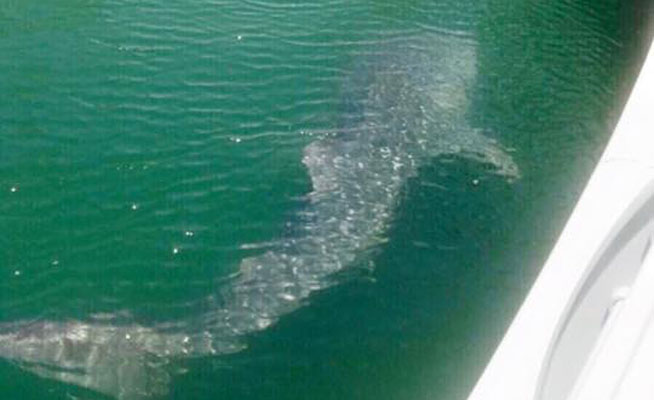 But the Arabian Gulf is thought to be a breeding area for the largest fish in the world, and so this isn’t the first time one of the beautiful creatures has been spotted in the UAE (far from it).

This beautiful, serene video of a whale shark floating through Dibba while fish dance around it was captured a few months ago by an instructor at Fantasy Diving UAE.

Uploaded a few years ago, this video shows a baby whale shark swimming through Dubai Marina, It was spotted by dragon boaters post practice (showing that the marina is a favourite spot for the beautiful – and, remember, harmless) animal.

3. CLOSE UP OF A WHALE SHARK IN THE MARINA

Again in the Marina, this video from July 2013 gives you a fantastic view of the whale shark’s beautiful spots as it casually swims up and then gives us a sassy flick of the tail (the markings near the gill are individual to each shark – kind of like a thumbprint).

4. DIVERS POSE WITH THE WHALE SHARK

This video from 2009 of divers swimming around a whale shark near Martini Rock in Fujairah show how calm – and huge – the creatures are.

There are also plenty of videos floating around of whale sharks in Abu Dhabi – particularly Ghantoot Marina. Here’s one of the clearest, which was uploaded about four and a half years ago.

And, of course, this being Dubai, you can also spy a super hi-tech bot-shark in the ocean. So yes, if you see Jaws jumping around in the sea, don’t fear, it’s probably The Seabreacher.

Read more about it here.

News
Outdoor
EDITOR’S PICKS
Ramadan in Dubai: 40 iftars to try
READ MORE
Where can Dubai residents travel? Check out these 14 destinations
READ MORE
Rumours, facts and reveals: New Abu Dhabi bars and restaurants
READ MORE
UAE announces reduced working hours for Ramadan 2021
READ MORE
MOST POPULAR
Sheraton Mall of the Emirates has a lot to offer this Ramadan
Looking for a cosy long stay residence in Dubai? Check this out...
Have you spotted the new Talabat Patrol team on Abu Dhabi roads?
Iftar home delivery for one? Here are some options...
Stunning Australian restaurant Hunter & Barrel is now open
YOU SHOULD CHECK OUT
Our website uses cookies and other similar technologies to improve our site and your online experience. By continuing to use our website you consent to cookies being used. Read our privacy policy here.