The 8 coolest things we saw at Cityscape

Cityscape Global is the ultimate Dubai event: 324 exhibitors over 41,000 square metres jostling to show off their shiny, sometimes sprawling, at other times spiraling developments.

We wandered around – clearly not looking like an investor as very few people offered us a chocolate from their Patchi towers – and here are the eight most exciting things we stumbled upon: 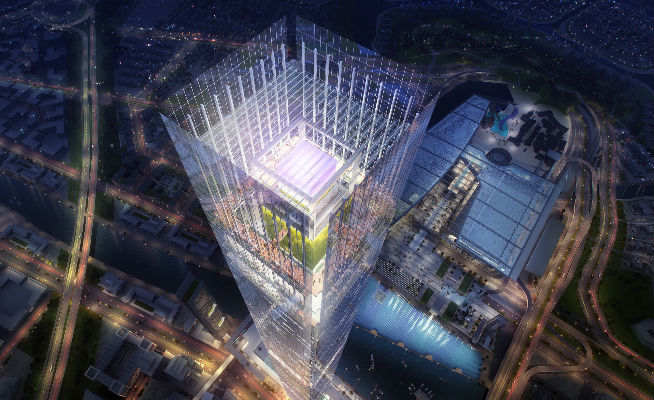 One of the most ambitious and eye-catching projects we spied was the 711m-tall super-building Dubai One.

Meydan One will also include a new shopping mall, 25,000 square metres of sports facilities, a beach and civic plaza, an 100-berth marina and a 5-star hotel.

We’ve seen its elegant skeleton slowly rise over the months, but seeing a model of the 2,000 seat music venue Dubai Opera gave us a better sense of how stunning the building will be when it’s finished. Here’s a look: 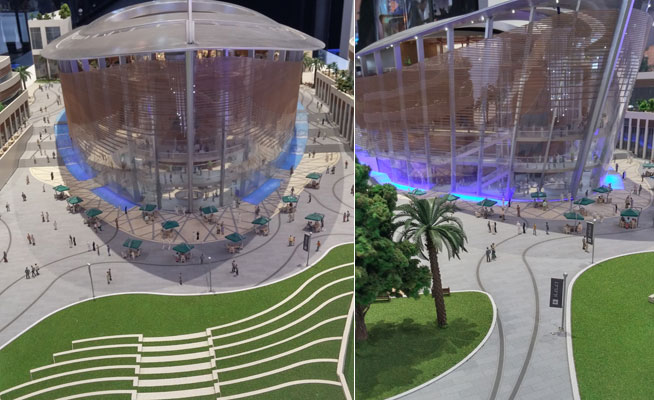 3. Seeing The Palm Promenade for the first time 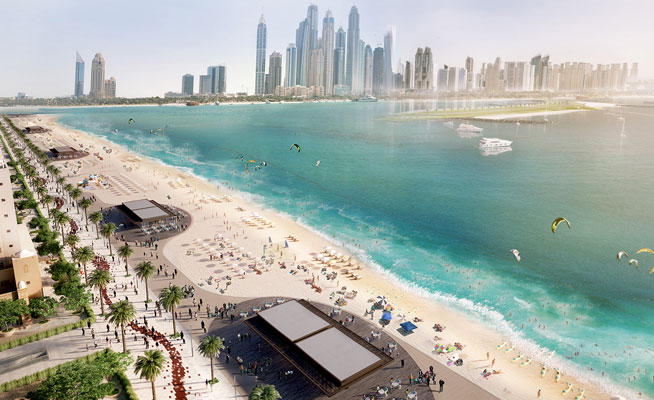 Announced today, the 1.5km-long Palm Promenade will run along the island’s trunk – and make the whole spot far more pedestrian friendly (we’re always on board for that).

It will add walkways and road crossings that will connect the area’s 30 apartment buildings with Al Ittihad Park and Palm West Beach.

Oh, and while we’re excited about the new shops, fountains and eateries that will come along with the new project, we’re most stoked to hear it will include parking spaces for 700 cars. 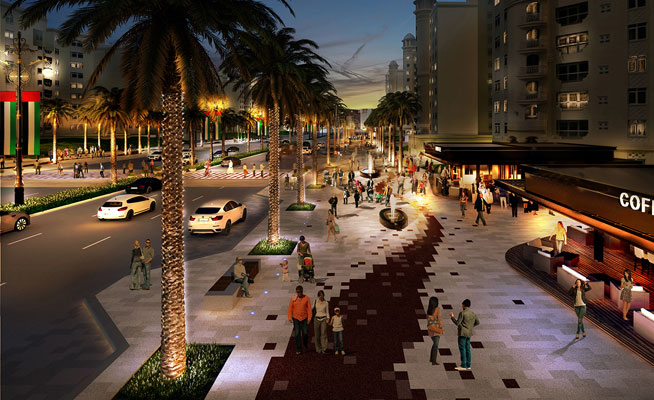 (Wow we love the people in renderings. Look at that family of three and how the dad casually has a towel strewn over his shoulder. Be prepared.)

Seeing these images reminded us that Dubai Canal isn’t just a traffic annoyance: the canal will connect Business Bay to the Arabian Gulf and add 8.1 km of waterfront to the city. That, and its 5.7 km boardwalk, 1.1 km of natural beach and its pedestrian connection between Safa Park and Jumeirah Beach Park mean it will add loads to the city. 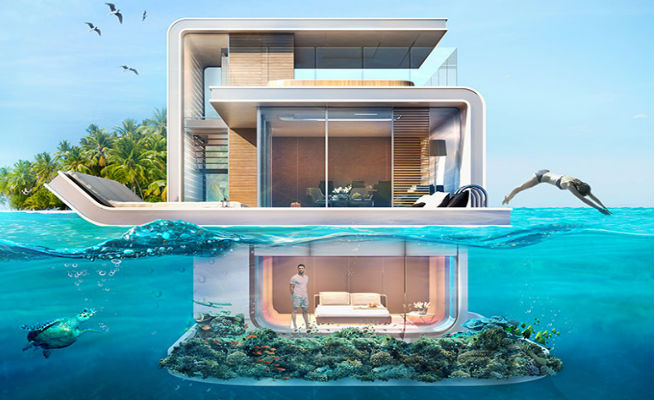 Supposedly the first of their kind in the world, The Floating Seahorse villas will be comprised of three levels: there will be an upper deck, a floor at sea-level and a third level including the master bedroom and bathroom, submerged completely underwater (epic for some, creepy for others).

If you think that’s cool though, the reason behind its name is even cooler. Chief Executive Josef Kleindienst said that the name The Floating Seahorse has been chosen for the villas because “the seahorse is an endangered species, so we plan to create an artificial coral reef beneath the luxury retreats which will be in a protected area in which seahorses can safely live and breed.” Kudos.

The luxury villas are set to launch at the end of 2016, but unfortunately it seems they are already sold out: so if you had dreams of sleeping with the fishes, you might be better off just buying a lilo and a snorkel. 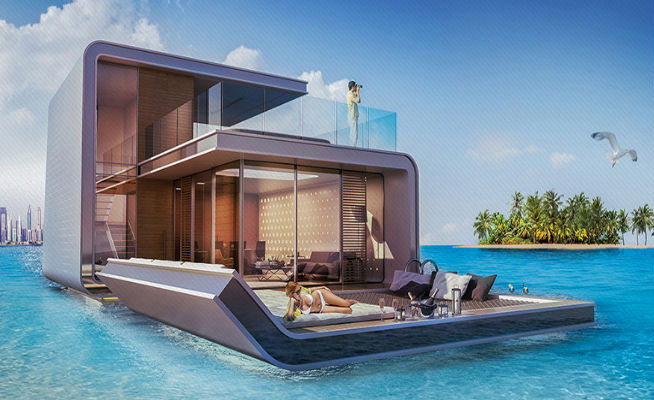 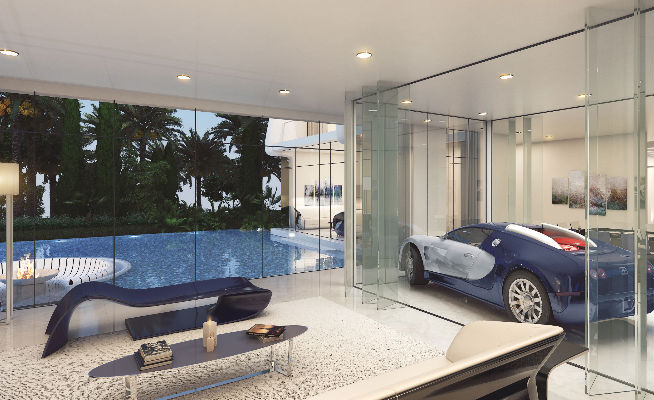 Left your sunglasses in your car? Not to worry, because you parked in the living room.

Well you will have if you live in Damac Properties’ new Bugatti-branded homes.

These luxury villas overlooking the Trump World Golf Club come complete with an ‘indoor garage display area’ so you can admire your Bugatti from your leather armchair as you smoke fat cigars.

Damac have not yet mentioned how many villas are to be included in the estate, but if you fancy one, it’ll set you back around Dhs36 million (pocket change, then). 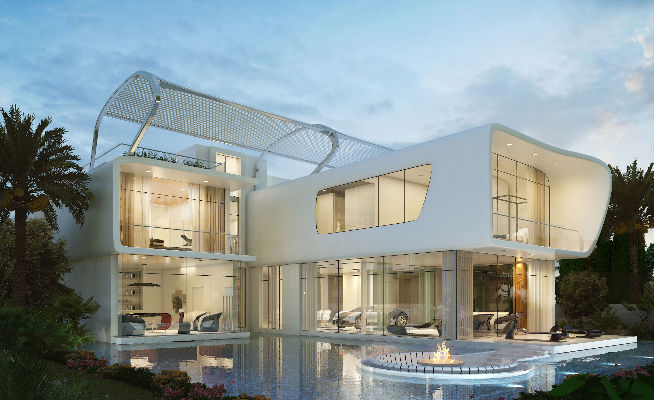 Oh yes, and in case you were wondering, Damac did have a Bugatti just casually parked in their Cityscape booth: 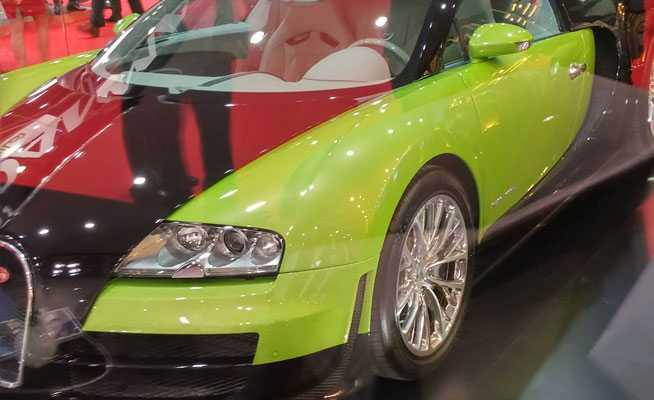 Loads of the stands showed just how much development’s happening in emirates like Sharjah and Ajman, but the big kid in us was most excited about this model. 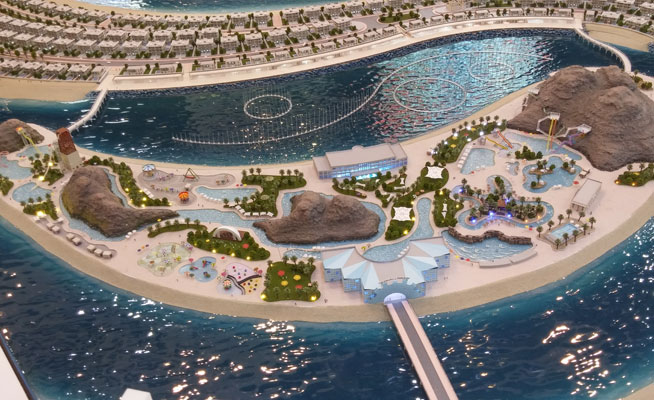 What is it, you ask?

Well only a waterpark called Crystal Lagoon which will be part of Sharjah Waterfront, a development that plans to house 200,000 residents.

Few details have been released about it yet – but we see fake rocks, long slides and a giant fountain (that’ll do nicely).

And, last but not least, one of the most delightful things about Cityscape for us were the tiny people in the many, many models shown off by the 324 exhibitors.

Call us weird, but we just love them. 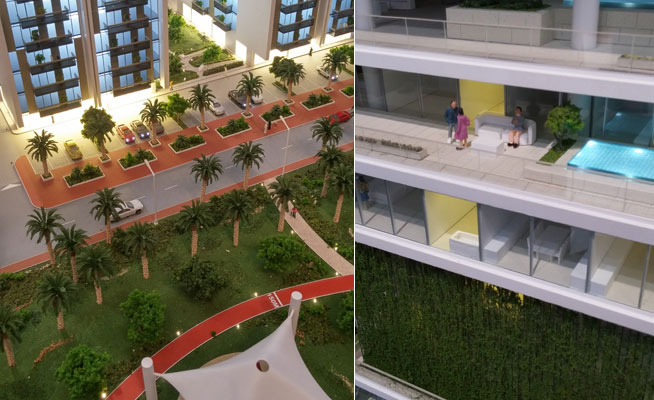 Look at that lady in the pink and the lad in the blue sports jacket – things are tense. Poor salmon-coloured-pant guy on the couch is just trying to appear invisible.

Culture
News
EDITOR’S PICKS
UAE holiday dates announced for Eid Al Adha
READ MORE
Emirates extends suspension of flights from India to UAE again
READ MORE
Coming soon: Everything we know about Ain Dubai so far
READ MORE
Khorfakkan set to open new tourist attraction 580 metres above sea level
READ MORE
MOST POPULAR
A cool new hotel is opening in Jumeirah Village Circle in September
Resident returning to the UAE? Here's the approval form
WizzAir Abu Dhabi will start flying to Italy with fares from Dhs129
Get two-for-one on Friday brunch at this popular Dubai pub
Spend the summer at this awesome new Surf Shack pop-up
YOU SHOULD CHECK OUT
Our website uses cookies and other similar technologies to improve our site and your online experience. By continuing to use our website you consent to cookies being used. Read our privacy policy here.