Dinosaurs on the loose in Dubai

There are dinosaurs roaming around, and Chris Pratt isn’t around to save us.

There have been reports of dinosaur sightings in the UAE, in fact, some people even thought they were real for a second.

Dinosaurs in Dubai! #mydubai
Again in taxi, taxi driver was scared he was keep asking me: ” Are they real mam?”

But luckily, there are no Jurassic World-esque enclosure issues in Dubai.

No, the dinos you’ve seen rolling around are the new additions to the Lost Valley’s Dinosaur Adventure Zone at the IMG Worlds of Adventure theme park, which will open in 2016 in City of Arabia, Dubailand.

It will be the largest temperature-controlled indoor entertainment park in the world.

A Japanese animatronics company named Kokoro has been collaborating with IMG to help produce the dinos for the theme park – some of which, like the 15.5m tall Barosaurus, take up to five years to create.

“The installation of the 69 dinosaurs in Lost Valley marks one of the final stages of completion for the world’s largest multi-brand indoor theme park,” said IMG. 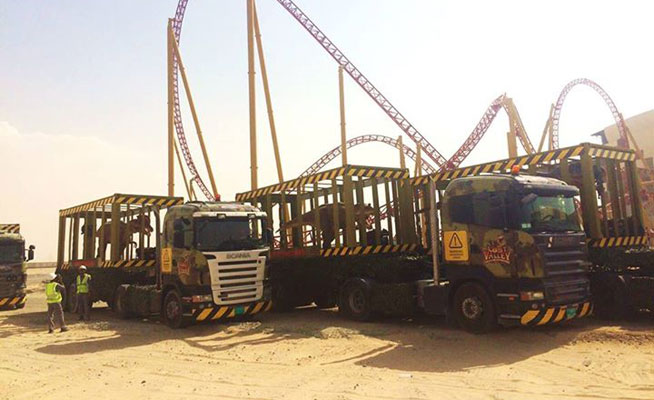 “Kokoro has used hydraulics to replicate their unique movements, their scales have been hand-sculpted by specialist artists while a thin covering layer of silicone gives their skin a shiny, life-like appearance, similar to modern day living reptiles.”

The Lost Valley will take park-goers back in time to the prehistoric era, where the dinosaurs can be watched in their natural habitat, and can be observed replicating their calls, or feasting on prey.

Aside from the dinos, the Lost Valley will contain a ‘mega launch coaster’ known as ‘The Velociraptor’, containing four loops, with the highest standing at 105ft high, propelling thrill-seekers from 0 to 100 kilometers per hour in just 2.5 seconds.

The entire park, spanning an area of over 1.5 million square feet will also contain attractions based on Marvel and Cartoon Network.

Indoor
News
Sport & Fitness
EDITOR’S PICKS
So, when is the next UAE public holiday in 2021?
READ MORE
All of the lavish new hotels set to open in Dubai in 2021
READ MORE
16 of the best pool passes in Dubai that are fully redeemable
READ MORE
All of the restaurants at West Beach, Palm Jumeirah
READ MORE
MOST POPULAR
Al Hosn app is down: Abu Dhabi requirements temporarily suspended
Traders Abu Dhabi launches a Dhs250pp all inclusive stay
Pics of the week: Your best photos of the UAE
Mark Ronson to play a DJ set at Abu Dhabi festival
Catch the Euro 2020 games at this cool lounge in the capital
YOU SHOULD CHECK OUT
Our website uses cookies and other similar technologies to improve our site and your online experience. By continuing to use our website you consent to cookies being used. Read our privacy policy here.