On driving in Dubai for the first time

This week, Hype’s Grumpy Old Raver takes to the Dubai roads, and in a car not that far removed from a tuna can…

As if the roads of Dubai were not filled with enough crazy drivers, after two years or catching taxis everywhere, the flatmate – aka One Who Shall Remain Nameless – has only gone and got a set of wheels.

If you haven’t guessed already, it’s one of those cars that you look at and wonder where the other half has gone. Let’s call it compact, like something you could tuck away discreetly in your handbag. It has the horsepower of a sedated Shetland pony and the engine of a hairdryer.

Having never driven out of the UK before, and never on the right hand side of the road, or an automatic, One Who Shall Remain Nameless was insistent that I chum her along on her first little drive around town, an exercise designed to build her confidence.

So on Saturday afternoon we ventured from our apartment down to the car park, where the dude from the car hire firm was standing waiting to do the handover, while the wee car sat in half a parking space, hazard lights blinking as if to announce its arrival. Del Boy’s Reliant Robin may only have had three wheels but it had more style than this thing.

Forms signed, I buckled up… and waited while One Who Shall Remain Nameless wrestled to get the gear stick from P (park) into D (drive). Two birthdays later, we were off. But after two feet, she hit the brake after we realised the hazards were still on. Could we find the switch to make them go off? That’s a negative. After much head scratching and faffing about on our part, a bemused security guy from our apartment block came over, leaned in through the window and pointed to the biggest button on the dashboard – the one with the angry red triangle that was somehow invisible to us. 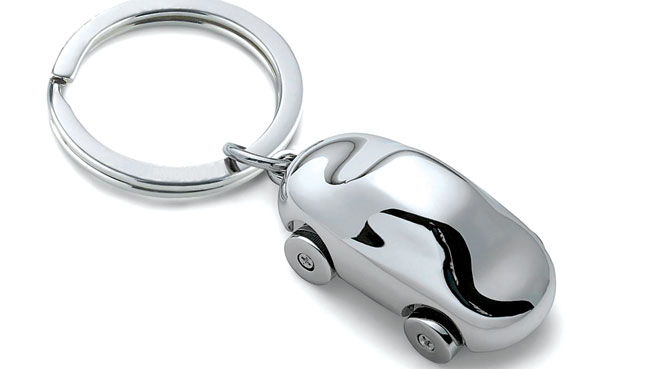 False starts aside, we made it out the car park and began to make real progress. Just 24 left turns later – the security guy stopped waving the fourth time round – One Who Shall Remain Nameless was ready to venture further than around the block.

Nervously, she drove from Dubai Marina to Kite Beach without incident, while we cackled at her attempts to “floor it”. It’s safe to say that in this vehicle, the flatmate won’t be towing a caravan or boat anytime soon. It couldn’t even pull her out of bed.

“I’m really scared of driving on Sheikh Zayed Road,” she confessed. “I think I’ll just avoid that at all costs. It gives me the proper fear.”

“Don’t be daft babe; the best thing you can do is bite the bullet – stare down the fear, laugh in the face of danger. C’mon, let’s take that road back home; you’ll soon get used to it.”

Soon enough we slipped onto Sheikh Zayed. “Just stay in the slow lane,” I offered.

“I don’t really have any other option,” she shot back, as every other vehicle thundered past.

“Where are you going to park it at work?” I asked.

One Who Shall Remain Nameless pondered for a moment. Then replied: “I was thinking I could just drive it into the lift and park it under my desk.”

They do say that the best things come in small packages and something tells me we’re going to get a lot of chuckle mileage out of the flatmate’s new car. So much so that we decided it needed a name.

After discounting ‘the angry wasp’ (because it makes more of a half-hearted hum than an angry buzz) and ‘the mobile microwave’, we decided to acknowledge that the wee car had opened up a whole new world of adventure to us, and so it shall now be known as ‘Priscilla: Ant Queen of the Desert’.

Road trips, here we come. Burning rubber, not quite so much.

Nightlife
EDITOR’S PICKS
Ain Dubai will open with fireworks, live music and a drone show
READ MORE
Incredible Aura SkyPool to open in Palm Tower this November
READ MORE
Brit Grand Slam hero Emma Raducanu confirmed for Mubadala Tennis
READ MORE
What’s On Nightlife Awards 2021: Here are the nominees...
READ MORE
MOST POPULAR
O Beach Dubai will no longer be opening on Palm Jumeirah
The most up to date information for entering Abu Dhabi: Oct 2021
First look: Instagram breaking 2D cafe, Forever Rose opens in Yas Mall
Emirates warns passengers to arrive early to DXB airport this weekend
Pics of the week: Your best photos of the UAE
YOU SHOULD CHECK OUT
Our website uses cookies and other similar technologies to improve our site and your online experience. By continuing to use our website you consent to cookies being used. Read our privacy policy here.