First Look: 8 reasons why you should visit Big Boys Toys

The event organisers call it “the world’s ultimate luxury lifestyle super show,” but we just know it as a one-stop shop for the world’s craziest gadgets and toys.

Here’s a sneak peek at the wackiest on show… 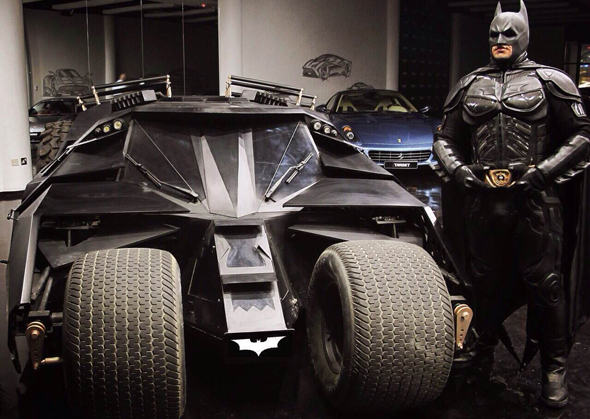 One of popular culture’s biggest boy toys: Batman’s ‘Tumbler’ Batmobile will be on show – and for sale – at this year’s Big Boys Toys. Inspired by the vehicle made famous by Christian Bale’s Caped Crusader trilogy, the Dhs3m ‘Tumbler’ boasts a V8, 5.7 litre Chevrolet Corvette engine and propane tanks which shoot fire. 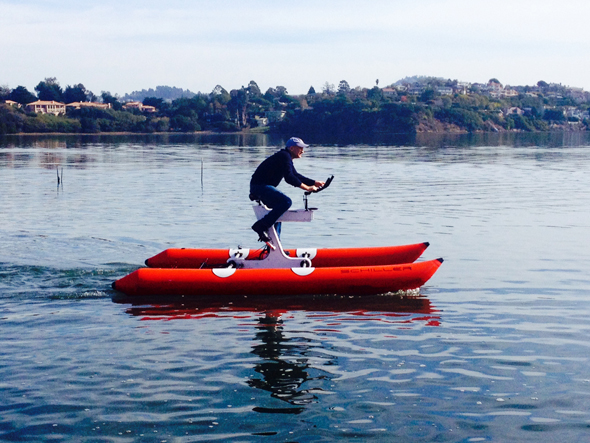 Who says you have to choose between a morning kayak and a leisurely cycle? Why not combine the two and hop aboard(?) The Schiller S1-C. This wacky product lets riders literally cycle on water. Designed for use on both fresh water lakes and coastal seas, the S1-C uses inflatable pontoons and a revolutionary propulsion system to provide sustained speeds of seven-to-eight kilometres per hour and top speeds in excess of 11 kilometres per hour. You can pick one up for an easy Dhs24,500. 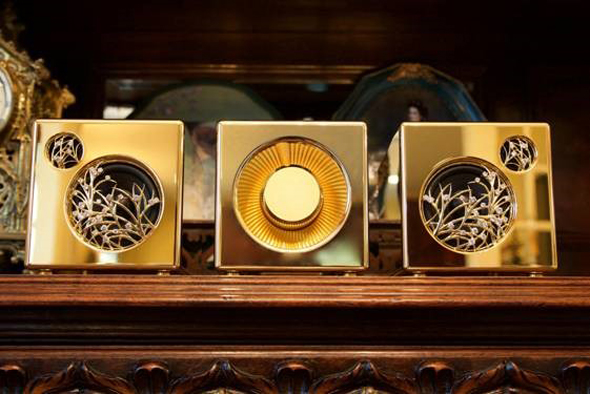 Rub your eyes as much as you want, but that won’t change the fact the price for this pair of speakers from Japanese firm Valorado is a cool Dhs33m (US$9m). If we owned them, we’d almost be scared to use the speakers for their intended purpose out of fear that we might do some damage and have to come up with another sizeable chunk of cash to replace them. So what makes this an expensive pair of speakers? It’s just a hunch, but we reckon it has something to do with the 60kgs of gold, the diamond encrusted surface, and the fact there’s only one in the world…

More from Japan and ‘PARO’ – a baby seal robot first developed for robot therapy in 1993 – is also Abu Dhabi-bound. More than 3,500 PARO robots are currently at work in hospitals and care facilities in over 30 countries. Used as an alternative to animal therapy, the clinically proven product aids Autism and dementia patients, and alleviates mental health conditions such as depression, anxiety and loneliness. They are also really, really, really cute. 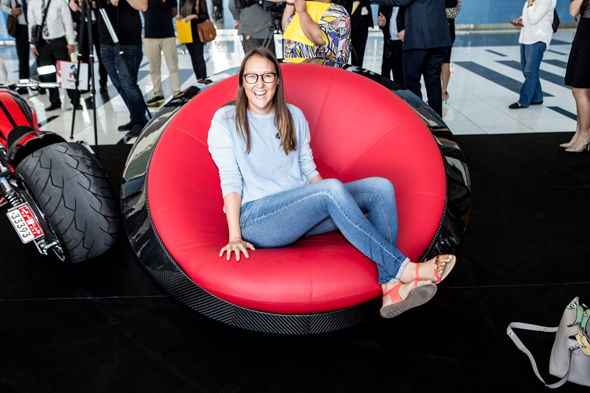 Abu Dhabi-based Le Vault showed us its signature U.F.O lounge rocking chair – a carbon fibre product with a handmade leather seat inspired by the space capsules that withstand extreme temperatures on re-entry to the Earth’s atmosphere. Not sure why you’d need that in Dubai, but hey they’re super comfy. 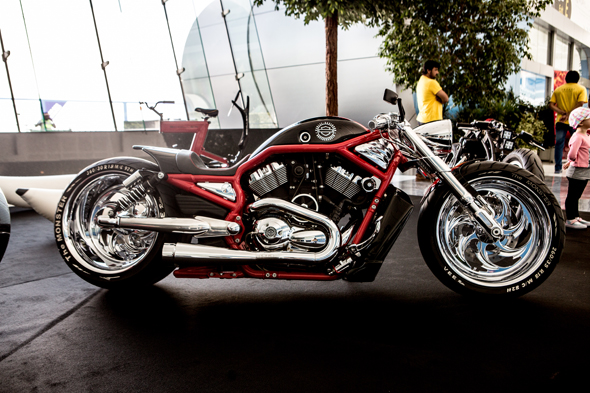 This year’s event will feature a number of customised motorcycles including this one-of-a-kind Harley Davidson V-Rod with the largest front (260mm) and rear (360mm) tyres ever installed. Built in Abu Dhabi by 86 Cycles, the motorcycle will go on sale at Big Boys Toys 2015 for Dhs500,000. 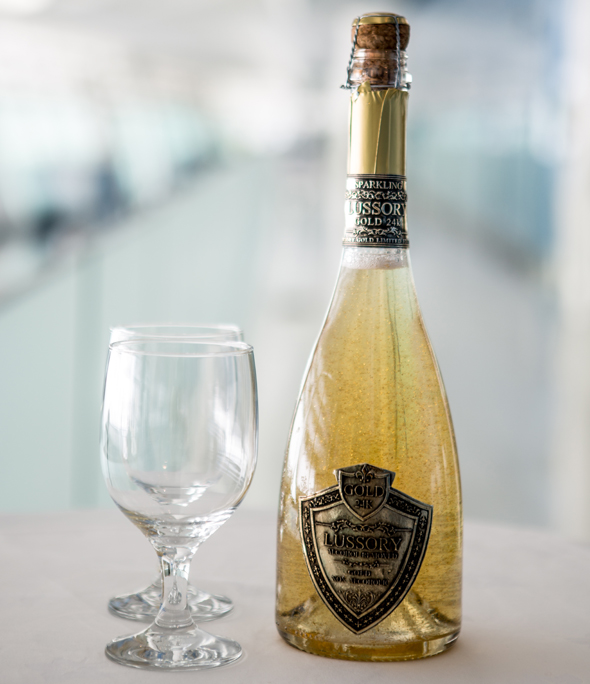 It’s not impossible to get your buzz on in the UAE, but since laws are pretty stringent, this new extravagant indulgence is hoping to strike lucky in the UAE. Lussory uses grapes from the northwest of Spain and combines it with a special German technique to remove all traces of alcohol. Did we mention, it also has edible 24-carat gold flakes in it for no apparent reason?

Other activities at Big Boys Toys this year…

Ever wanted to drive a supercar but felt like you were missing a million for the privilege? Big Boys Toys 2015 will hold a ‘Super Car Test Drive Pit’, where car enthusiasts over the age of 21 holding a valid driving license can test drive from a selection of over 50 super slick and lightning fast supercars. Get ready to look this cool, for about one block… 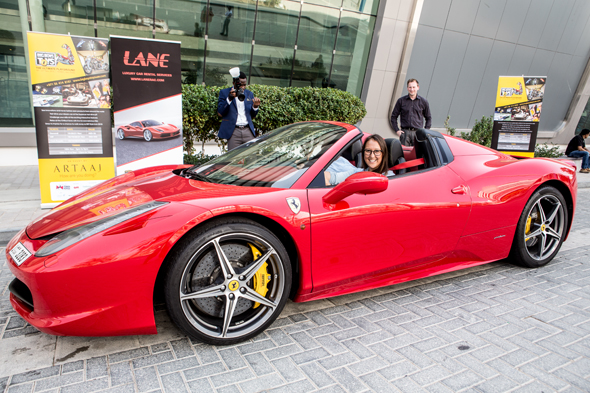 18 to 21 November
Tickets start at Dhs50 and can be purchased via bigboystoysuae.com

News
Things to do
EDITOR’S PICKS
Here's the full list of UAE public holidays in 2023
READ MORE
23 incredible things to look forward to in the UAE in 2023
READ MORE
Hidden gems: 10 UAE desert pop-ups to discover this winter
READ MORE
Where to travel in 2023: 10 new flight routes from the UAE
READ MORE
MOST POPULAR
26 of Dubai's best beachfront restaurants
8 wonderful things to do in Dubai this week: Feb 6 to 9
Where to go to get your Al Baik fix in the UAE
Reset and recharge with a relaxing staycation at this stunning Dubai hotel
The most expensive apartment in Dubai just sold for Dhs410 million
YOU SHOULD CHECK OUT
Our website uses cookies and other similar technologies to improve our site and your online experience. By continuing to use our website you consent to cookies being used. Read our privacy policy here.