Fan of The Simpsons? Or is Sons of Anarchy more you thing?

None of the above, but you cry every time you watch Titanic? Or have seen every single one of Ridley Scott’s Alien movies?

Well, the good news is that a new Fox theme park planned for Dubai will feature attractions from all of these movies and TV shows – with rides also based around Ice Age, Planet of the Apes, Night at The Museum and Predator planned. The park will be located on the Dubai-Al Ain highway near the Outlet Mall. 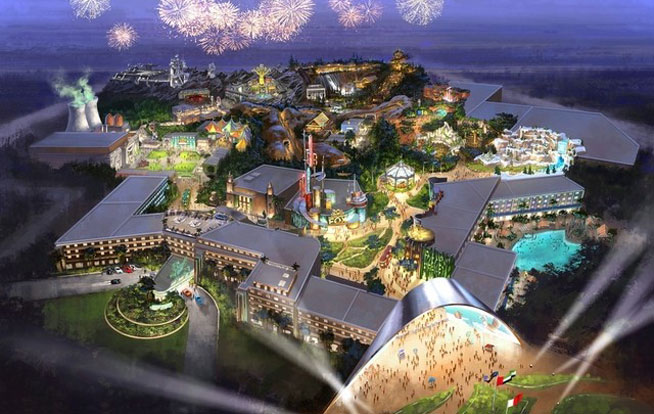 A rendering of the park

A partnership between Fox and Al Ahli, the four million square-foot theme park will include retail and the world’s first Fox-themed hotel (we’re booking the primary-yellow-overload Simpsons room if there is one).

The hotel will reportedly be within the theme park: “You are actually in the park when you are in your room,” said Mohammed Khammas, the chief executive of Al Ahli Holding, “You’re part of the show”.

You’ve got a while to psych yourself up for the sure-to-be-scary Alien ride too, as the park isn’t scheduled to open until 2018.

This project is completely separate from Dubai Parks and Resorts – which will contain four separate movie theme parks – and will open next year. Read all about that here.