Having a lawn in Dubai means living on a budget

Catboy from Dubai 92 talks about the luxuries in life, and how he didn’t expect that a piddly patch of grass would ever be considered one of the finer things…

As you may or may not know, I am from Yorkshire. The stereotypical Yorkshireman is said to be tough, hardworking, no-nonsense. They’re also said to watch their pennies.

I am none of these things.

I enjoy spending money. I enjoy bright, sparkly new things. In fact, November 25th is my birthday and for about a month now I’ve been dropping  hints to my wife about watches, drones, phones, cameras and whatever other overpriced must-have-but-don’t-need lifestyle products have caught my eye of late.

Not this month, though. We’ve got three children, a greedy landlord, two clapped-out cars and a lawn.

For the benefit of the uninitiated, kids’ school fees here are outrageous. The only way I’d ever find them acceptable is if the music teacher was a Beatle, the English teacher was Hemingway and Jessica Ennis taught P.E.

Our landlord is a textbook Dubai landlord. In three years he hasn’t returned any calls about maintenance problems, so the villa now resembles a haunted mansion from Scooby Doo. He follows none of the guidelines set down by the authorities and, although he was fluent in English when we first moved in, he has since forgotten it all, making communication all but impossible. What he is good at is squeezing us, year after year. It would be cheaper for me to rent Roman Abramovich’s London pad and commute on Emirates every day.

*MORE: Where to get things made in Dubai*

My cars were in fantastic shape when I bought them, but Dubai does something to cars. I don’t know if it’s the heat or the sand, but cars in Dubai remind me of middle-aged heavy smokers playing five-a-side football. Good for the initial burst, then a spluttering, dripping mess until finally they give up altogether.

The lawn was the real surprise. Until moving into this villa, I had never paid much attention to grass. I certainly never considered it being a financial burden. Now I loathe grass. I hate it to the point of swearing at it as I get in my (knackered) car. Why? Because having grass in Dubai is a financial nightmare. We use a Dubai Fountain-worthy amount of water daily just to keep it green. My Dewa bill this month was Dhs6,500. This is not comedic exaggeration. I even phoned them up to make sure some sausage-fingered administrator hadn’t accidentally hit the wrong number on their keyboard.

It was this staggering bill that led me to announce a forced period of austerity. It’s possibly our last gasp of financial air before drowning in a sea of debt, dumping our 4×4 in the Terminal 3 car park, and returning to the homeland, suntanned and skint. 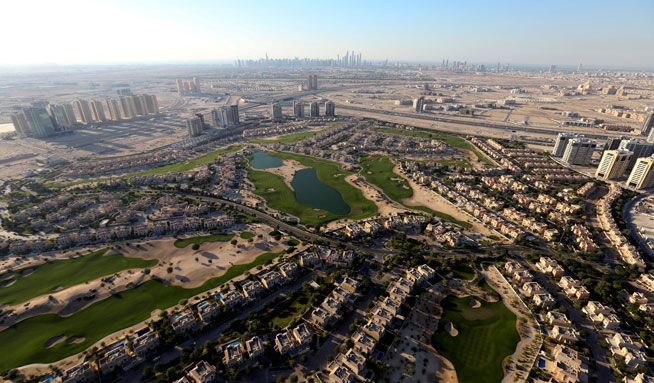 Just look at all that extravagant grass

The problem is Dubai doesn’t really ‘do’ austerity. Sure, you can tighten your belt, but that belt is probably a Louis Vuitton holding up Prada trousers. And you won’t be able to tighten it much, due to that brunch in that celebrity chef’s restaurant at that palatial hotel. Make do and mend doesn’t sit alongside gold-dispensing vending machines, maids and mega malls.

I may have to resort to busking. Although I should warn you it’ll be Dubai busking… Three thousand dirhams for platinum tickets, or fifty thousand for a table (including non-premium beverages).