In pics: Inside the St Regis Dubai

You know that construction site right next to Business Bay Metro Station? It’s on the spot where the Metropolitan Hotel used to be, and the Dubai Canal will soon run through. Well, one day that will be Al Habtoor City – a development from the Habtoor family made up of residential towers, a high-design W Hotel, a 1,000 room Westin and more. And its first major building is opening to the public tomorrow.

The St Regis is the first hotel in the complex to launch, and its opulent doors will open on Friday November 20. Yes, it’s still completely marooned by construction and they won’t be offering discounted rates while it is, because that’s just not how the brand rolls. But that said, inside does feel worlds away from the nearby cranes, clanging machines and metro line. 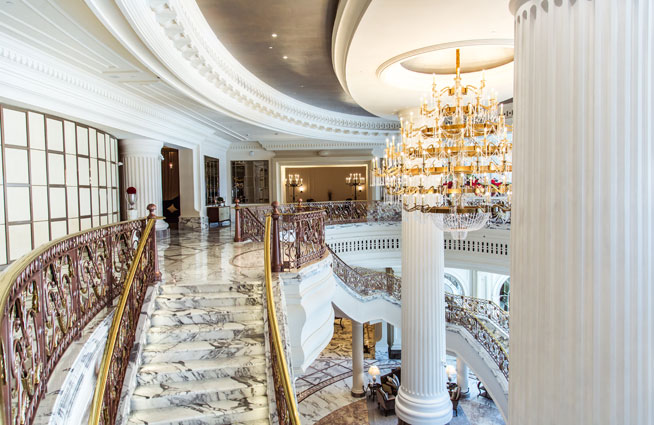 As you walk in you’re greeted by a giant chandelier with 1,200 handcut crystals. It feels more like you’re walking into an eccentric Sheikh’s mansion than a hotel, which was intentional. The design ethos of the 234-room hotel revolves around the story of a fictional character – a well-travelled Emirati man who has collected artifacts from all corners of the world. See what we mean about the Wes Anderson film now? 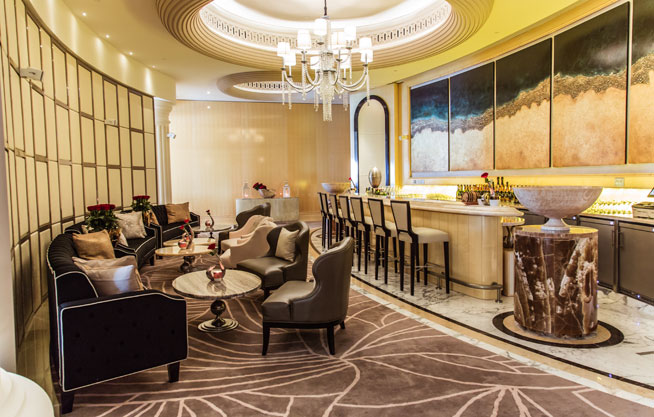 This is the aptly-named Champagne Bar. The first St Regis was built in New York over a century ago, and so the brand has many strong traditions. One of these is that a bottle of Champagne is sabered every day exactly at sunset in every St Regis in the world. Don’t know what sabering is? It’s when they cut the top of a bottle off dramatically with a sword. And this is where you’ll find that ritual in the Dubai hotel. 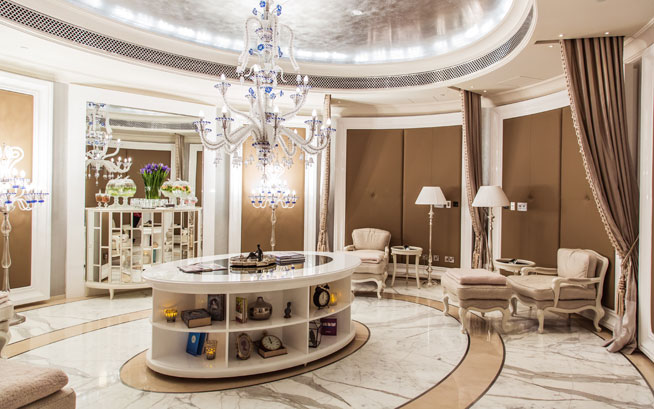 This is the relaxation area in the ladies’ part of the Iridium Spa (which uses and sells cult Western Australian beauty brand Sodashi). All clocks in the spa are set to midnight. This is partly so you don’t think about the time, but also an homage to Caroline Astor, the St Regis founder’s mum, who was a renowned night owl and socialite in 19th century New York (and so was always up at midnight). 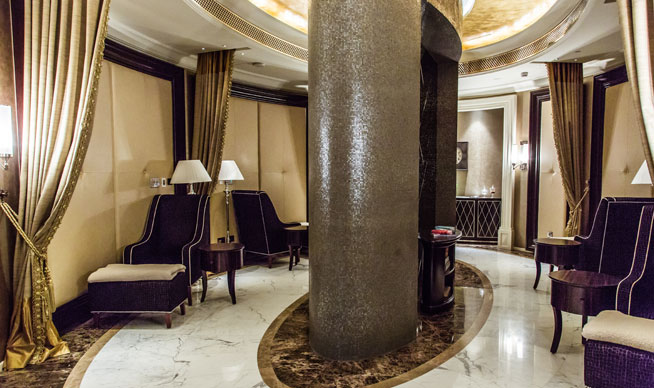 And don’t worry lads, you get your own spa relaxation room too. 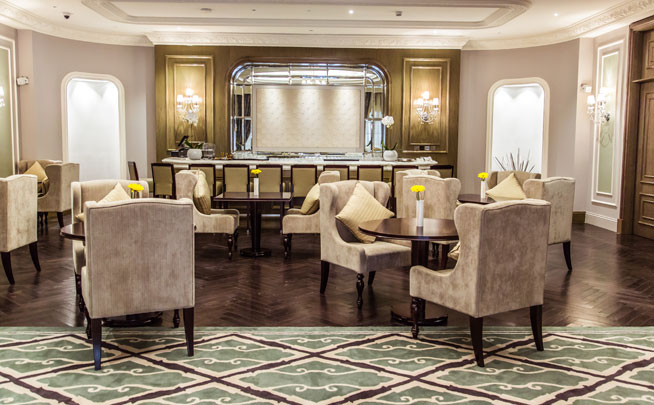 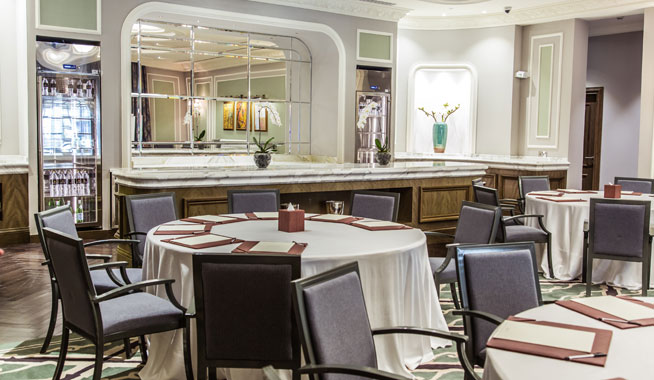 Meanwhile, the hotel’s meeting rooms look like triple-Black-Hat restaurants. We’d have meetings all day if all of the rooms we sat in looked like this. 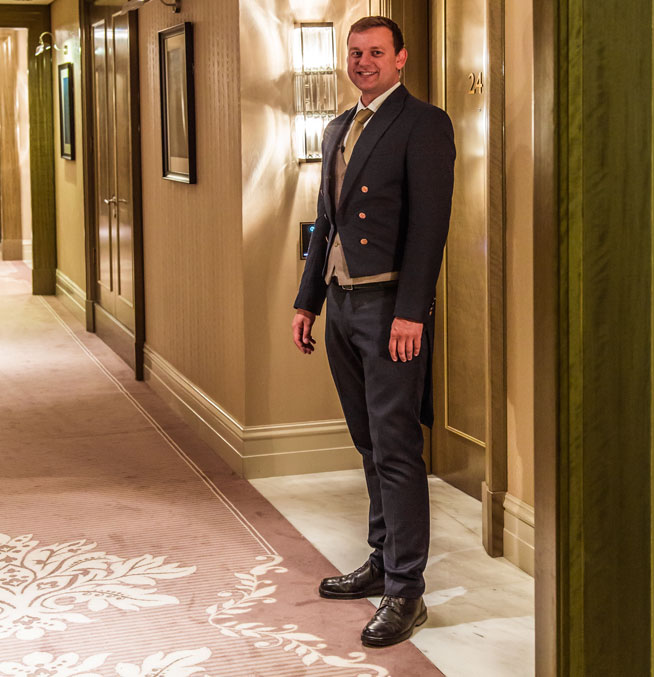 In true old-school style, every guest at the St Regis has a butler (who services only around six rooms at a time). So if you’re at Dubai Mall and want a piping hot earl grey waiting for you when you get back you can text your butler and he’ll sort it for you. 24/7.

Can our butler fix the traffic on Sheikh Zayed for us pre-commute tonight? That’d be grand. 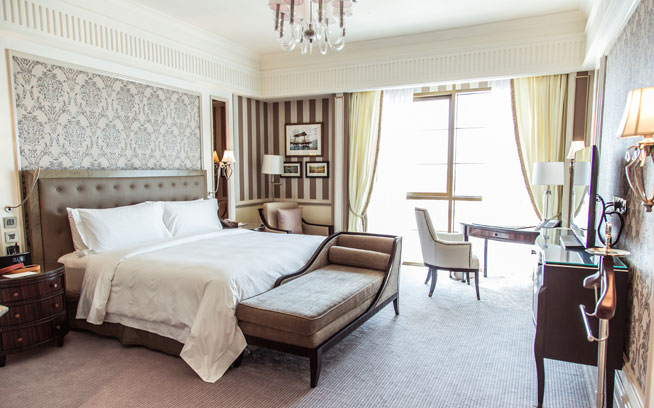 Here’s one of the ‘more standard’ rooms, the Deluxe – they’re all 55 square metres and are all this well upholstered. That’ll do. 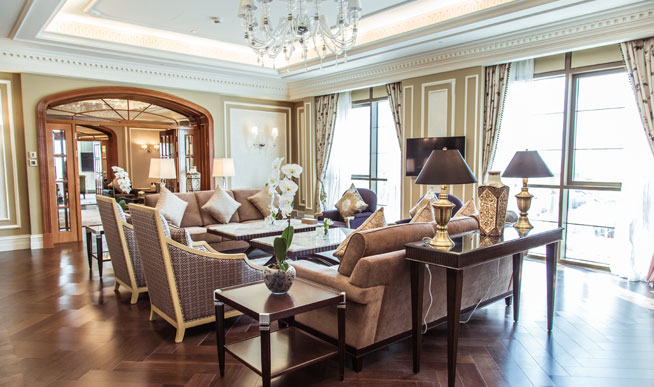 Meanwhile, this is just a small portion of the Dhs13,000 a night Grand Suite (of which there are four). They come with their own massage room, huge TVs everywhere and a private elevator (which goes exclusively from the room straight to the lobby so one doesn’t have to rub shoulders with strangers). 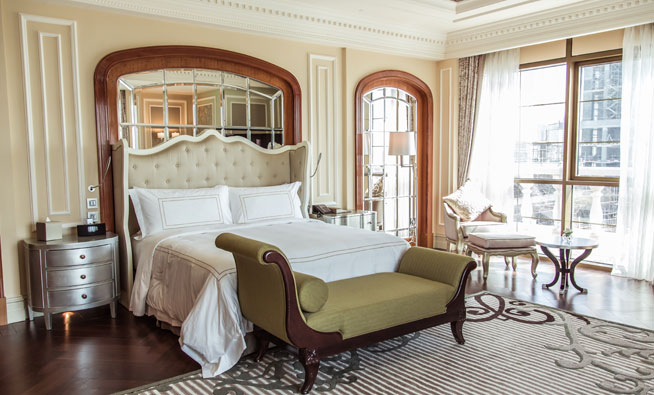 And here’s the bedroom. This isn’t even the fanciest suite either, there’s also a double floor Royal Suite, as well as a Bentley Suite (yep, themed on the car). Those aren’t open to the public yet however. We’ll give you a tour as soon as they are. Speaking of Bentleys, all St Regis hotels offer Bentley limo services (well, except for those in countries that have a 300 per cent import tax on luxury cars). 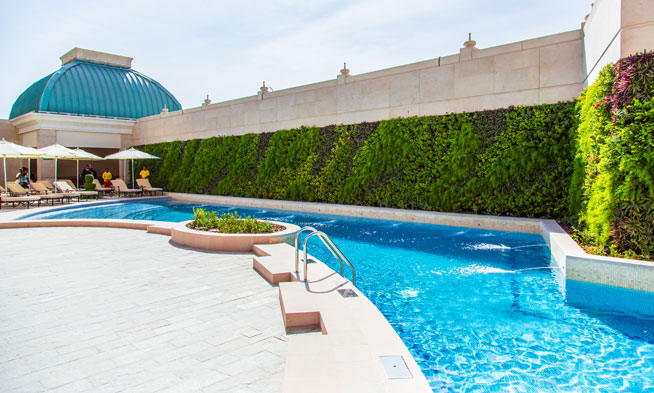 The pool is small by Dubai standards, but we’re somewhat spoilt here, aren’t we? It’s perched atop the building on a private little terrace (and they bring you fruit skewers while you lounge). It’s for hotel guests only though, so don’t expect to book a spa treatment and then lounge in the sun. 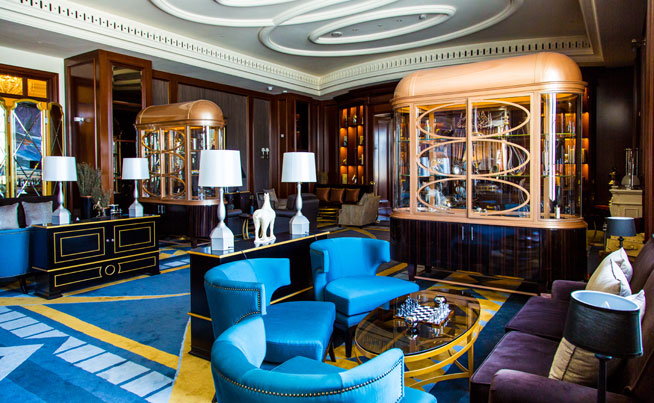 The St Regis Bar is very lush and serves a Golden Bloody Mary made with yellow tomatoes (every St Regis around the world serves its own twist on the cocktail). 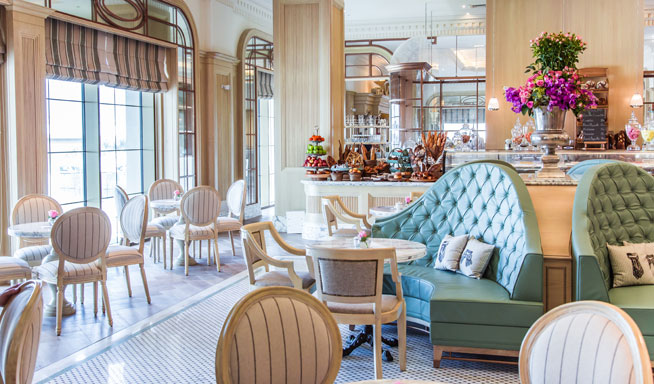 Here’s Brasserie Quartier’s very own patisserie, where high tea is served (while we didn’t eat any, we did have a quick look at the pastries, and they all looked magnifique). 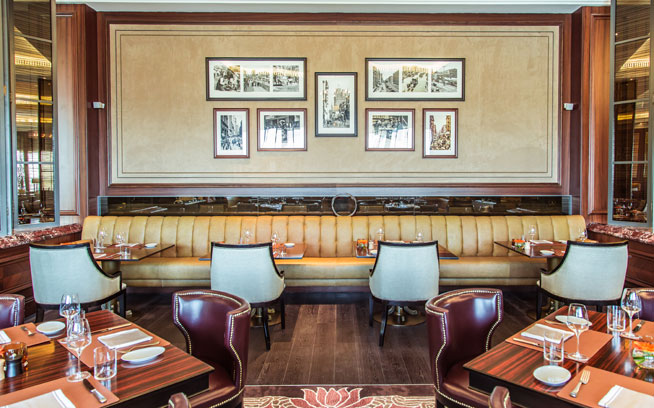 The menu at J&G Steakhouse is ‘inspired by’ Michelin-star chef Jean-Georges Vongerichten (and all the beef on the menu come from one particular farm in Australia that services only St. Regis. Signature meats). 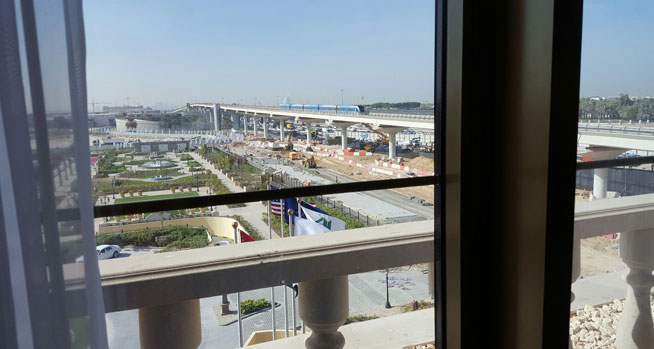 And here’s the view out to SZR and the metro from the hotel. So yes, the hotel is a little tricky to get to at the moment (you have to take the Safa Park exit and approach it from behind) and it is currently in a sea of construction.

But remember when Al Manzil and The Palace first opened in Downtown and they were surrounded by rubble and everyone thought, how is this going to work? Well now they’re in the ‘Centre of Now’ So yep, this is Dubai, and Al Habtoor city will be finished and a hotspot in no time we’re sure (by next year in fact if all goes to plan).

Also, this won’t be the city’s only St Regis – there is a Hacienda-style 134-room polo resort St Regis planned for Dubailand, which will likely open near the end of next year. We’ll keep you posted!

News
Staycations
Travel
EDITOR’S PICKS
Ramadan in Dubai: 50 iftars to try
READ MORE
Where can Dubai residents travel? Check out these 14 destinations
READ MORE
Rumours, facts and reveals: New Abu Dhabi bars and restaurants
READ MORE
UAE announces reduced working hours for Ramadan 2021
READ MORE
MOST POPULAR
A four-day ultra marathon is taking place in the Dubai desert
Put the pedal to the metal with free tickets to Ekart Zabeel
Etihad drops massive summer sale with up to 50 per cent off flights
Spend your summer in a snowy cinema in Dubai
Tipsy Lion reopens with wallet-friendly deals all week
YOU SHOULD CHECK OUT
Our website uses cookies and other similar technologies to improve our site and your online experience. By continuing to use our website you consent to cookies being used. Read our privacy policy here.