In pictures: The flights and flops of the Red Bull Flugtag Dubai 2015

They came, they saw, they crash landed. This weekend saw the welcome return of the Red Bull Flugtag to Dubai, and What’s On were there to capture it all.

A 25,000-strong crowd watched from the shores at Dubai Creek Park as 30 teams took to the sky in their weird and wonderful handmade flying contraptions at the Red Bull Flugtag last weekend.

The team Premier Falcons reached a whopping 71 metres, coming painfully close to beating the world record distance of 78.64 metres, set by the Chicken Whisperers in LA two years ago.

However distance isn’t everything. Teams were also judged on creativity and performance, and the winning title went to the Skydive Dubai team The Millennial Falcon, who reached a respectable 27 metres. Check out their winning performance here:

Complete with flying monkeys and a rather beardy Dorothy, The Wicked Witch Rides Again put on quite the show, securing themselves first place for creativity and third place overall. Here are a few more of our favourite pictures from the day.

1. “I’m melting! I’m melting!” – Dorothy took the Wicked Witch for a dunk in the creek. 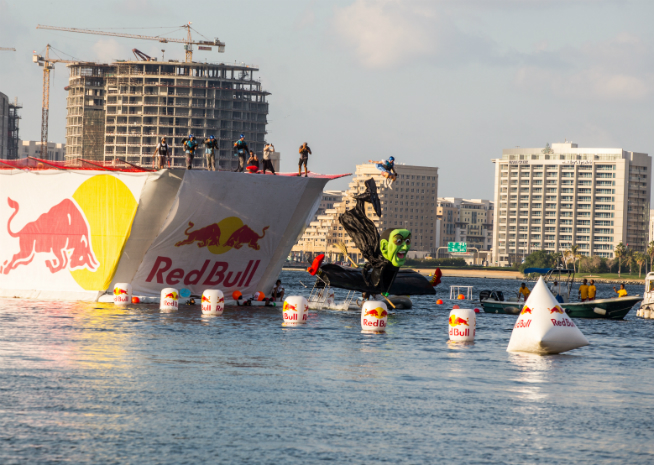 2. Team Biz Force One showed us that the art of a good jump is grace and poise (or maybe not). 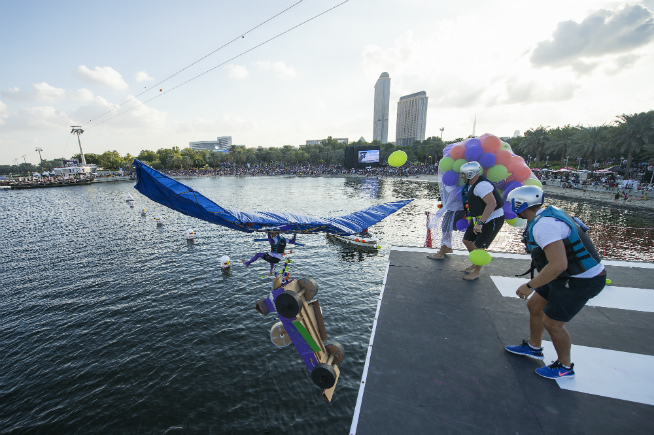 3. Turns out minions don’t make the most aerodynamic flying machines, but ten points to Airplix II for effort. 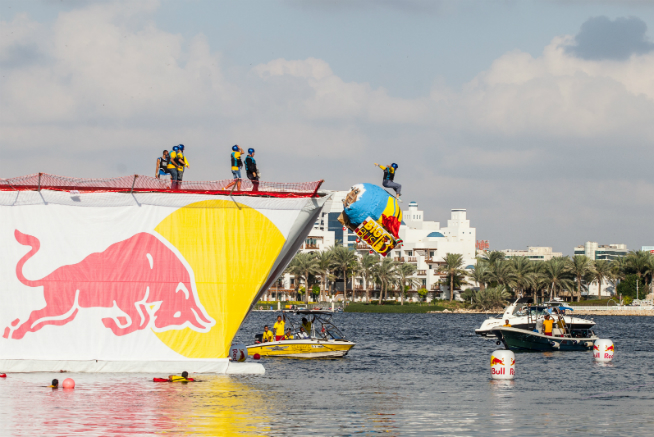 4. The Premier Falcons go for a leisurely glide across the creek before finally plummeting at 71 metres. 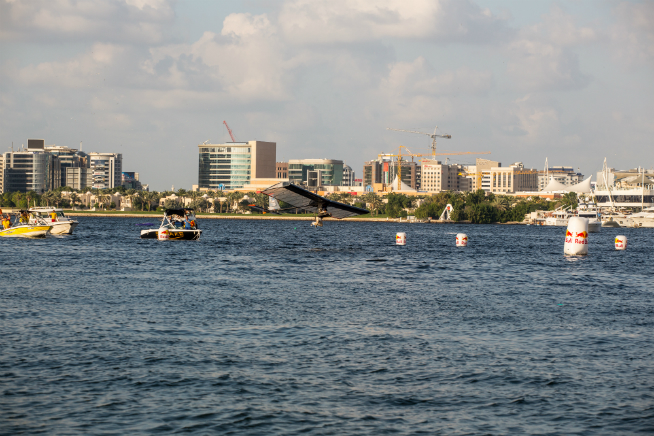 5. Hanna-Barbera’s Stop The Pigeon crew look hopeful as they prepare for take off… 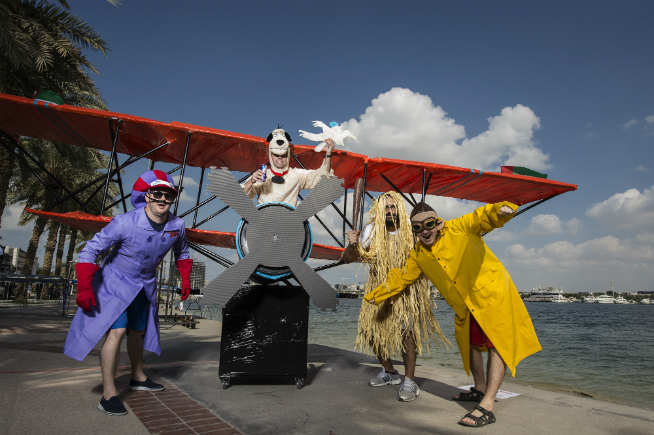 6. …but Muttley ended up putting his doggy paddle to practice. 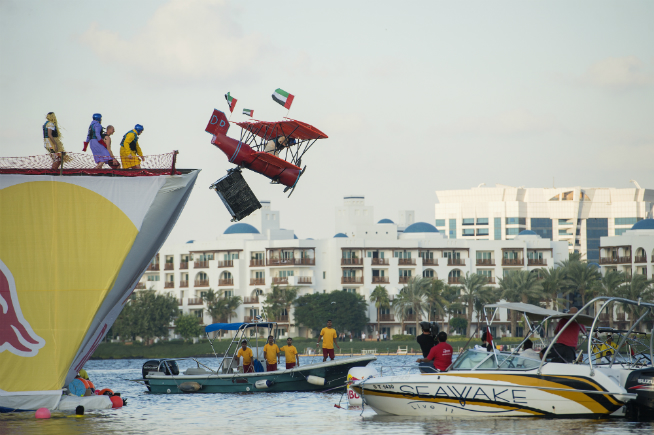 7. Tens of thousands packed out the park to watch the flying contraptions put to the test. 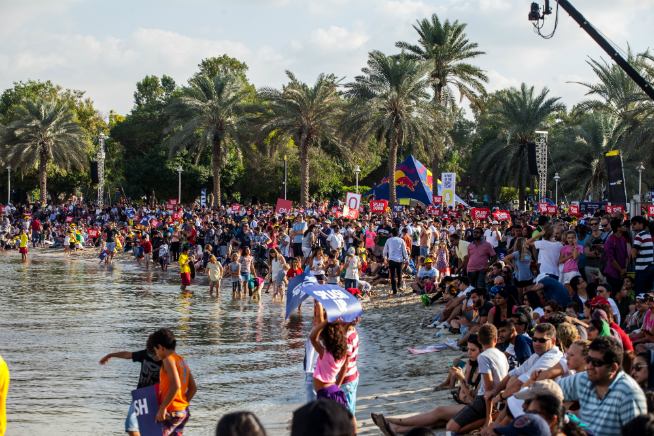 8. Team Up needed a few more balloons to make that house fly. 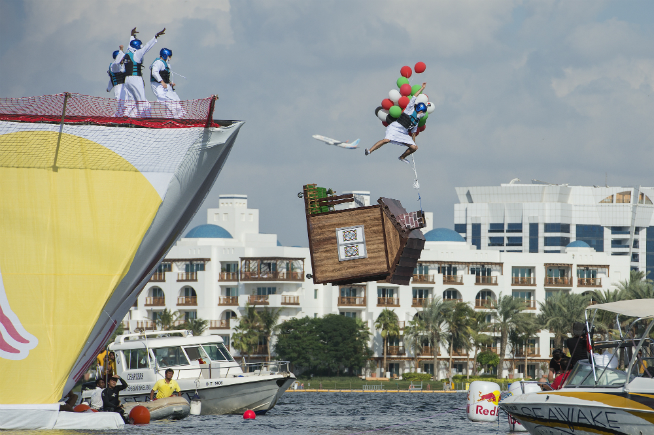 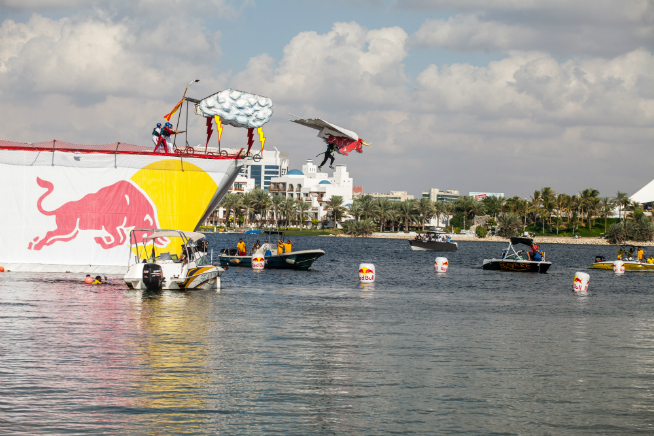 10. It was an absolute circus backstage, as team The Hoop awaited their turn to make a splash. 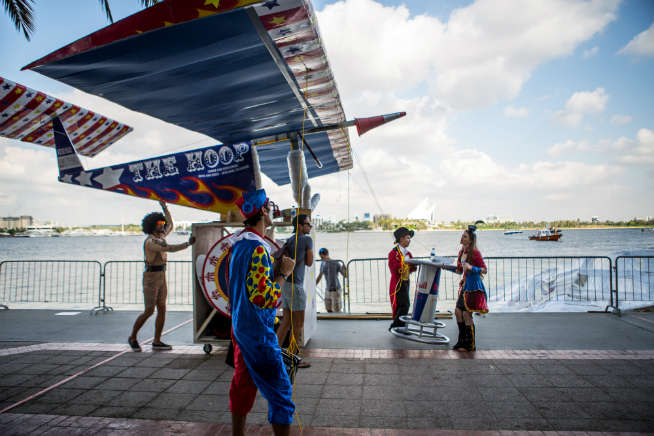 *MORE: Red Bull Flugtag Dubai: Everything you need to know*

News
Outdoor
Sport & Fitness
EDITOR’S PICKS
13 Sheikh Hamdan-approved restaurants in Dubai
READ MORE
Dubai brunches temporarily banned in new preventative measures
READ MORE
12 upcoming Dubai mega-projects we can't wait for
READ MORE
16 of the best beach bars in Dubai for sundowners
READ MORE
MOST POPULAR
Satisfy your BBQ cravings at selected UAE Rotana hotels to win big prizes
7 worthwhile ways to celebrate Women's Day in Abu Dhabi
You can now buy Marks & Spencer's clothes at Nakheel Mall, Palm Jumeirah
Dine with acclaimed chef Massimo Bottura in Dubai this month
Tuck into Moroccan cuisine at this gorgeous restaurant in Downtown Dubai
YOU SHOULD CHECK OUT
Our website uses cookies and other similar technologies to improve our site and your online experience. By continuing to use our website you consent to cookies being used. Read our privacy policy here.