What’s On speaks to Santa Claus about his visit to Abu Dhabi on Dec 10 at the Abu Dhabi Theater, and what he plans to do while he visits.

What’s On got to speak to Santa ahead of his appearance in The Santa Claus and the Magical Christmas Journey stage production at the Abu Dhabi Theater. It will be his first time visiting Abu Dhabi (asides from when he is delivering presents of course), so read on to find out what he plans to do when he arrives.

Santa tell us how do you decide who is on your nice or naughty list?

Well, well, well… I have a very very long nice list. Because most boys and girls are really very nice and good to their mummies and daddies and their brothers and sisters. I have a few who are on my naughty list. And they are naughty and rude, they don’t do as they are told, they don’t go to bed when mummies and daddies tell them and therefore they are on my naughty list. They don’t get very good presents. So I do advise all the good boys and girls to get on my nice list. Oh my word yes.

Is it true you’ll get coal if you are on the naughty list?

No, no, no. That’s a story. Someone is telling fibs. Some of them I don’t give presents to at all, and they wonder why, and later on they realise they are on my naughty list and then they become nice children again.

What will you be doing while you are in Abu Dhabi?

Well ho ho ho I’ve never actually been to Abu Dhabi before so I will ask the good people to send me to all the nice places. I hope you have a nice beach, because Mrs. Claus and I do like to lie on the beach to take the sun because it is very very cold up here in the North Pole.

How will your reindeer deal with the warmer temperatures?

Well they are going to need a little haircut, because they are quite hairy, so they won’t be as hot as normal. And I’ve got one of my elves to prepare little packs of ice to cool them down when they are in Abu Dhabi and Dubai and all over the Middle East where we go. 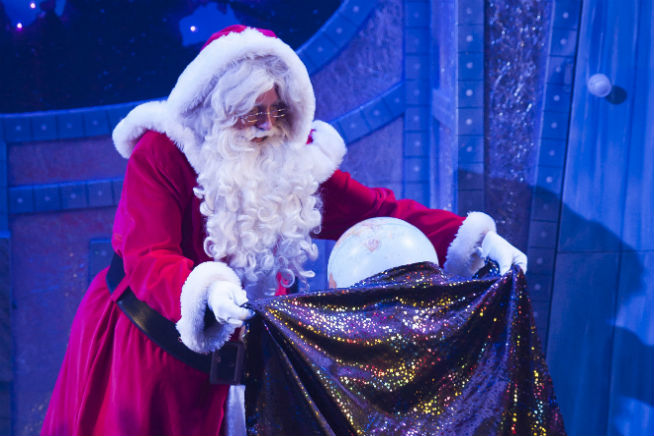 What snack should children leave for you on Christmas Eve?

I always love a mince pie. When I go to their bedrooms and into their lounges, or when they have a chimney I slide down, I do like to see a mince pie. I’m very partial to it. I don’t eat a lot, sometimes I will eat a boiled egg, but mainly I eat mince pies.

So how do you stay in shape with all those treats?

Well I’m very portly so Mrs. Claus chases me around sometimes to make sure I do a run. And off we go into the snow in the North Pole and we run for about half an hour. And I feel so much better. Of course I also eat my greens – that is very very important. If you eat greens, and I think all the boys and girls should eat their greens, it does keep the weight down a little bit. But I am quite a chubby chap as you know.

Can you tell us about your Santa sleigh sat nav? How does it work?

Well I own a very special one. My chief elf Charlie, who is a very very clever man, made me one. It is a very complicated one but it tells you exactly what child is where, in what country, and in what house. And we speed, faster than the speed of sound, in order to get round the world. And off we go and my reindeer leap around and get so excited because they have little earplugs in their ears so they know where to go. But don’t tell everybody because I’m the only one who has got one! Ho ho ho!

What is your favourite holiday movie?

I think Santa Claus was probably the best one. It was a bit of a shame that I wasn’t in it, somebody impersonated me – which I thought was a bit off. I did like that Dudley Moore, he’s a nice little chap, he was very very good. But I thought they should have had me in there. But they wanted some actor pretending to be Santa Claus when the real Santa Claus is me!

Culture
News
Theatre
Things to do
EDITOR’S PICKS
UAE holiday dates announced for Eid Al Adha
READ MORE
Update: Emirates again extends suspension of flights from India to UAE
READ MORE
Coming soon: Everything we know about Ain Dubai so far
READ MORE
Khorfakkan set to open new tourist attraction 580 metres above sea level
READ MORE
MOST POPULAR
Sign your kids up for a five-day theatre camp at The Junction this summer
Pics of the week: Your best photos of the UAE
New films to watch in cinemas this week: July 22 to 28
Caesars Palace Dubai transforms into a summer playground this Eid
10 things to do in Dubai that are free (or cost next to nothing)
YOU SHOULD CHECK OUT
Our website uses cookies and other similar technologies to improve our site and your online experience. By continuing to use our website you consent to cookies being used. Read our privacy policy here.