The Roads and Transport Authority has announced a Dhs482 million project that will run from the Al Safa Interchange to the Al Manara Interchange and will link Jumeirah Beach Road with Al Khail Road (pictured above).

The project will consist of bridges and flyovers that will allow traffic to travel from Umm Al Sheif Street to Latifa Bint Hamdan Street. It’s expected to be completed in the first quarter of 2018.

It will also improve the traffic flow from Umm Al Sheif street to Al Wasl Street.

The red pin here shows Latifa Bint Hamdan Street (which is where the flyover will begin, then travelling above Sheikh Zayed Road along to Umm Al Sheif Street). 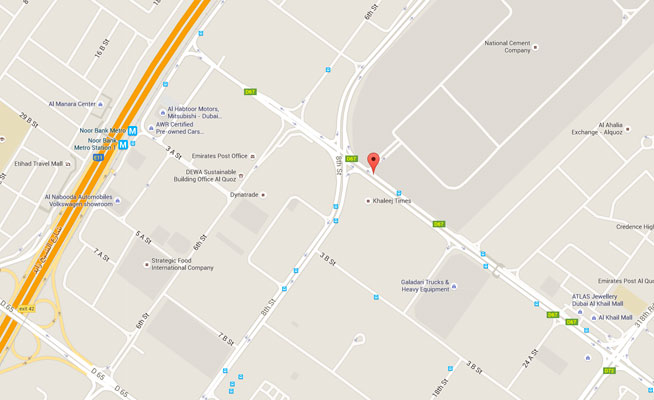 “The new project is part of a major project to upgrade Al Wasl and Jumeirah Streets, as well as RTA’s master plan for upgrading the network of roads, bridges, crossings and tunnels to accommodate the growing traffic movement and improve mobility throughout Dubai,” said Mattar Al Tayer, the director-general of the RTA

“The project covers linking Jumeirah Street with Al Khail Road and parallel roads… providing smooth and free traffic movement from Umm Al Sheif Street in the direction of Sheikh Zayed Road up to Latifa bint Hamdan Street, and from Al Zomorrud Street to the East up to the Sheikh Zayed Road. The new bridges will be constructed up and down the Red Line of the Dubai Metro without affecting the operation of the metro. The two bridges will be linked with Sheikh Zayed Road through ramps, enabling free exit points.”

And what does the project mean for traffic in the meantime? Well, Al Tayer explained that they’re doing all they can to minimise the effect the construction will have on traffic: “The contractor’s work area will be entirely separated by a high barrier to reduce the disturbance of road users.”