Ziad El Chaar, the managing director of Damac, has said he will “go on TV naked and resign” if the pessimistic predictions about Dubai’s property market come true this year.

This bold statement was made by El Chaar during an interview with the Sunday Times when they contacted the developer to discuss the current downturn in Dubai property prices.

Fighting words from the developer considering property prices fell more in Dubai last year than in any other city worldwide (and experts predict that prices will drop further this year).

El Chaar recently wrote an open letter to the media accusing some of Dubai’s real-estate experts of “professional malpractice” due to their “erroneous” reports that forecast excessive supply of new homes in the emirate and drove down the market.

(Damac is the company that famously offers free supercars with apartment on billboards across Dubai.)

But, days after the signs were pulled down, Dubai residents noted that they were reinstated. 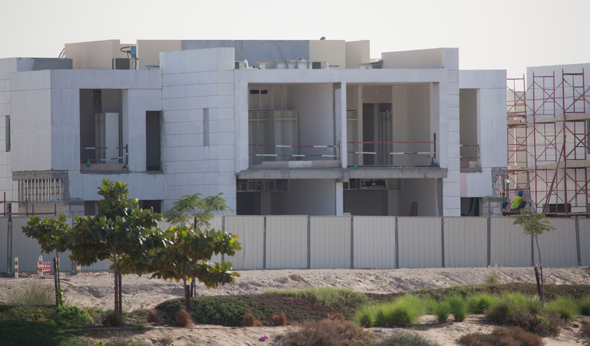 A villa at Damac’s Akoya development.

The Sunday Times reports that Trump’s name was only reinstated “following bitter legal wrangling between El Chaar and lawyers for the American tycoon”. The paper goes on to say that Trump’s toxic brand is likely to have a lasting effect on Damac’s profits from the Akoya development:

‘“I’ve never seen Arabs so offended by comments made by a public figure,” says one Egypt-born real estate analyst at a leading local bank. “Nobody admires him any more. Fewer want to live in a home with his name on the front door.”

Who knows what will happen in the Dubai property market this year, although we do wonder if anyone will hold El Chaar to his promise if it goes as badly as some predict?