Seeing Dubai through the eyes of Moutasem Kabbani, founder of Metal East Records…

Where are you from? Aleppo, in Syria.

What do you do? I’m the music buyer for Virgin Megastore. I’ve been working for them for ten years now. And I also run Metal East Records.

What inspired you to start it? The scene here’s not that big. It used to be a lot bigger when Desert Rock was here, but that stopped in 2009. After that, there weren’t many metal concerts here – only a few gigs now and then. And you hardly ever see international bands coming to Dubai. So I wanted to do something. My original idea was to start an events company, but I decided to start a record label.

How many bands are signed to the label? Are they all from Dubai? I’m picky about the bands that I’ve signed to Metal East. I’ve only signed two so far – Anarchadia, from Syria, and Svengali, from Dubai. But I help a lot of local bands to put their CDs in Virgin Megastore. Anarchadia unfortunately split up, because they were based in Syria and had to leave – one of the band members is in Turkey, one’s in Finland, another’s in Austria. It’s sad, because they were a great band. I helped them do a song with John Schaffer, who’s a real icon in the metal scene. He’s their idol.

Do you do a lot of events with Dubai-based bands? I bring international bands here, so I always have local Middle Eastern bands open for the bigger, more established bands. I recently did a show with the Finnish act Insomnium, and had people vote on which band should support them. In the end, two won – Smouldering In Forgotten, from Bahrain, and The Cosmic Truth, from India.

Do you play any music yourself? I play bass guitar, but I don’t practise much. I have two bass guitars at home, but I rarely play them nowadays.

What’s the metal scene like in Dubai? It’s growing. There are always new bands that are very good. There’s a scene here, but it’s hidden. People don’t know about it. But with the latest two events, I’ve seen more new people coming along, because people are telling each other and spreading the word.

Has it changed much since you first came here? The first gig I did here was in March 2013. Since then the audiences have tripled. There are many more people coming now.

Where can people buy metal records? You can buy Metal East Records in Virgin Megastore. And we also have a merchandise stand at the events. People can buy local records, international records and T-shirts.

First impressions of Dubai? You hear a lot about Dubai, but I’d already lived here, so knew what to expect. In a way it’s normal, just like any city. But then you go down Sheikh Zayed Road and you’re just like, ‘Wow’.

Have those impressions changed? No. It’s amazing. Every day I love it more and more.

Favourite place to eat in Dubai? There’s a restaurant in JLT called Nola Eatery, which is really good. I love it there. And Mythos, which is also in JLT. Both have really good food, and the staff are amazing.

Favourite place to catch up with friends? Usually The Music Room, in Bur Dubai – and not just for the metal gigs. They have a good house band who play rock and pop covers, too. 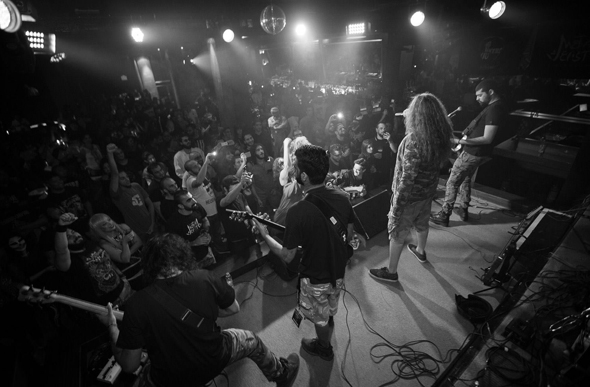 Favourite club or music event in Dubai? It’s not happening any more, but I liked Sandance. I liked the vibe, regardless of the music. And I love the concerts that Flash Entertainment do, because they bring over the best acts, like Black Sabbath or Metallica.

Favourite international DJ or band? Metallica. I saw them when they played here in 2013. It was sold out, and there were around 30,000 people. It was crazy. They opened the gates at 7pm, but I’d been waiting there since 7am, just to get to the front. In the end, I was in the middle of the stage, right at the front. It was an amazing experience. I was extremely tired, but it was worth it.

Favourite Dubai-based DJ or band? There are so many good bands in Dubai, and the Middle East in general, like Aramaic, Benevolent and Nervecell. But Svengali are top of the list. They’re really good, I like their music and the way they treat everyone around them. They call their friends family. They’re amazing.

What do you do when you need some ‘me’ time? Either just sit at home and watch TV, with some popcorn, or go on a road trip with my wife and drive round the UAE.

How would you sell Dubai to someone who has never visited the city? Nobody needs to sell Dubai, in my opinion, because everyone already knows what Dubai is. Even the bands, when I invite them to come out here, they get excited. I can’t sell it any more. When I talk to my friends, I’ll tell them it’s full of opportunities and a great place to grow.

What’s the secret to success here? Hard work and connections.

What’s your top tip for getting the most out of Dubai? Try and explore. Don’t stay in the malls. Ask the tourists where they go, not the people who live here. When you’ve been here a while, you don’t feel like you need to go anywhere. You stick to the same places. Whereas tourists explore Dubai. One guy told me to go to the Heritage Village by Dubai Creek. I’d lived in Dubai for nine years by that point and had never been there before. It was great.

What’s next for you? In the long term, I’d like to do a Metal East Fest – something like Desert Rock. But that would need a lot of investment and sponsorship, and I don’t have that right now. In the short term, there’s a charity CD I’m working on, called Art Of Noise Volume 1. I’ve collected tracks from metal bands in the Middle East, one track from each country, and put them together on a CD. I’m going to sell it, and whatever we make from the CD, we’ll give it to the people of Syria. I know it’s not going to be that much, but at least we’re doing something.

Find out more about Metal East Records at facebook.com/MetalEastRecords

News
Nightlife
EDITOR’S PICKS
So, when is the next UAE public holiday in 2021?
READ MORE
All of the lavish new hotels set to open in Dubai in 2021
READ MORE
16 of the best pool passes in Dubai that are fully redeemable
READ MORE
All of the restaurants at West Beach, Palm Jumeirah
READ MORE
MOST POPULAR
Celebrate Christmas early with these 'Halfway to Christmas' brunches
Pics of the week: Your best photos of the UAE
What’s On The Bookshelf: Rom-coms great for reading on the beach
Book your holiday package from Dhs1,399 per person with Holidays by flydubai
Immersive cabaret concept The Theater Dubai opens its doors
YOU SHOULD CHECK OUT
Our website uses cookies and other similar technologies to improve our site and your online experience. By continuing to use our website you consent to cookies being used. Read our privacy policy here.