Everything you need to know about Dubai marathon this weekend

It’s dubbed “the biggest mass participation sporting event in the Middle East”, here’s your guide to the Dubai Marathon this weekend.

Whether you’re lacing up your trainers along with the 30,000 other estimated runners or just planning to join the cheering crowd, here’s everything you need to know about the Standard Chartered Dubai Marathon 2016…

The marathon kicks off at 6.30am, and starts on Umm Suqeim Road close to the Madinat Jumeirah. The 10K starts at 9am and the 4K fun run gets going at 11am. Note that this year, the marathon route is reversing its course – so runners will start by running along Al Sufouh Road towards Dubai Media City before looping around and heading towards the flagpole on Jumeirah Beach Road. There, they’ll turn around again and continue along Beach Road back towards the finish line opposite Madinat Jumeirah. Note: plan to get there early, with plenty of spare time, just in case you have trouble parking etc. Speaking of…

Avoid Jumeirah Beach Road, Al Sufouh Road, the Madinat and the Police Academy area. The best place to park is at the start of Al Wasl Road, as close to Umm Suqeim Road as you can get. Be aware that spaces start filling up early – leave it too late and it might be easier to get a cab. You could also park in Al Barsha and use the Mall of the Emirates Metro overbridge to walk over. 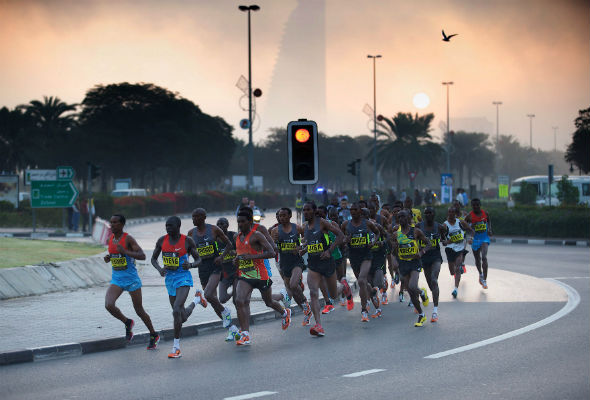 Jumeirah Beach Road is by far the easiest place to spectate – grab a camping chair, some coffee and an encouraging sign and you’re good to go. But to cheer the marathoners on at the hardest part of the course, there’s no beating the road through Dubai Media City or the final few kilometres of Jumeirah Beach Road.

Who to watch out for

Since 2016 is an Olympic year, the elites will be out in full force. Look out for Ayele Abshero, who holds the course record, and two-time London Marathon winner Tsegaye Kebede. In the women’s division, two former Dubai Marathon champs Mamitu Daska and Tirfi Tsegaye will be looking to take the title in 2016. The first place prize money is $200,000 (Dhs735,000), making it the richest marathon in the world.

The marathon and 10km road race both begin opposite the Madinat Jumeirah on Umm Suqeim Road, while the 4km fun run starts on Al Wasl Road. All finishes are on Umm Suqeim road before the Dubai Police Academy and Al Wasl Road junction.

Many roads around the route will close or have limited access from 1am on Friday morning (or Thursday night, if you will), particularly near where the start and finish lines converge. All of the roads where you can see highlighted in blue in the map above will have partial closures. The roads will then be slowly opened from 12pm on Friday onwards. We’ll keep you updated if further details emerge this week, or follow the RTA on Twitter for updates closer to the time.

Here’s a map that gives you a good idea of where everything is and some of the road closures: 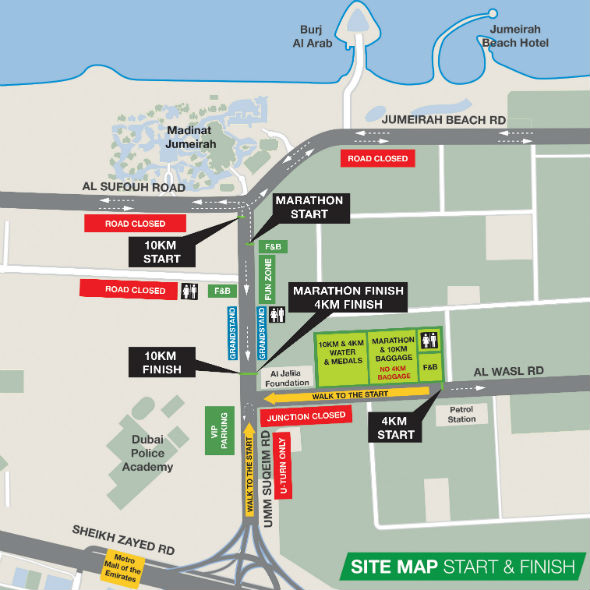 The event was still accepting last-minute entries online only as of Monday morning (do so here), however entries to all categories will be closed as soon as all of the runner numbers are allocated.

News
Sport & Fitness
EDITOR’S PICKS
Ramadan in Dubai: 50 iftars to try
READ MORE
Where can Dubai residents travel? Check out these 14 destinations
READ MORE
Rumours, facts and reveals: New Abu Dhabi bars and restaurants
READ MORE
UAE announces reduced working hours for Ramadan 2021
READ MORE
MOST POPULAR
Looking for a long stay in a popular Dubai location? Check out Hilton Dubai The Walk...
Review: Is The Orangery your favourite new date night spot?
Deals and discounts: It's all about the ladies on Tuesdays at La Mer
Here's how you could win Dhs50 million this Eid weekend
What's On's epic Lock In staycation is returning to Dubai this month
YOU SHOULD CHECK OUT
Our website uses cookies and other similar technologies to improve our site and your online experience. By continuing to use our website you consent to cookies being used. Read our privacy policy here.