Can the new French restaurant make its mark in Dubai?

Legend has it that at Bagatelle in Saint Tropez, nights typically end with diners dancing on the tables. That’s all well and good for the louche party crowd on the French Riviera, we thought, but in an upmarket Dubai hotel? We weren’t so sure.

Fast forward two hours and we were bitterly regretting our early sitting. Nobody had swept the plates aside to do the running man, but there was definitely some in-chair shimmying going on (our table included). We thought Destiny’s Child’s early material had no place in a fancy, French-inspired dining room. Bagatelle proved us wrong.

The restaurant is brand new, but there was a nice buzz when we arrived at 8pm, and virtually all of the tables were filled by the time a DJ took up his spot an hour later. The volume was then subtly raised to just loud enough to get shoulders moving, but not so noisy that conversation was a problem.

The white décor at Bagatelle is punctuated by plush blue velvet upholstery and artwork as unexpected as the soundtrack – think giant pop art-style prints of Pepe Le Pew and the Incredible Hulk. In spite of the Marvel homage on the walls, the overall effect is still lavish and feminine (look out for the door covered entirely in flowers in the ladies’ bathroom). The menu is similarly decadent, with French classics like foie gras and steak tartare given a contemporary, New York-style spin.

A kale salad (Dhs55) was nicely sweet and crunchy thanks to a sprinkling of pecans and dried cranberries. Any regard for our cholesterol levels ended there, as we moved on to a truffle pizza (Dhs125) laden with huge, freshly shaved discs of pungent black truffle, balanced by just enough gooey fior di’latte cheese. The pizza’s thin, perfectly charred crust deserves its own individual shout-out.

From there it was on to a plate of sliders (Dhs125), with generous slabs of pan seared foie gras sandwiched between gleaming potato buns instead of beef. We felt certain the effect would be too rich and overpowering, but the addition of a sweet, veal bacon marmalade and a lick of truffle mayo cut through the metallic tang of so much foie gras, making this the stand-out dish of the night. 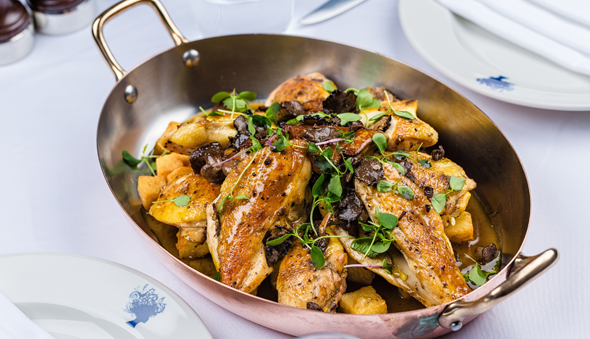 The wagyu beef rib-eye (Dhs265), served with a pink and green peppercorn sauce, was perfectly medium-rare, meltingly tender, and big enough for two. A portion of pale, under-seasoned fries was the only minor misstep.

Our meal came to a suitably sinful close with le tipsy cake (Dhs75), which wasn’t actually a cake, rather a cast iron pan filled with a batch of sweet brioche rolls, designed to be torn off and dipped in dark chocolate, salted caramel sauce, cream – or all three.

On reflection, maybe this was the reason we didn’t end up doing the robot on the table – we were too full of butter and cream to heave ourselves up there. 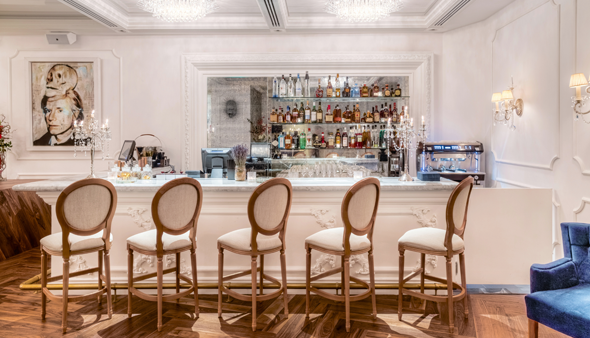 Atmosphere: Formal, but with a party vibe