What does he eat on the morning of a big match? Why does he like Dubai? What does he always travel with? We chat to Novak Djokovic as he lands in Dubai.

Over the next week-and-a-half, the world’s best tennis players are in town for the Dubai Duty Free Tennis Championships.

*READ MORE: Could the next Dubai Duty Free be played on an underwater tennis court?*

There have been some high-profile withdrawals from the tournament, with Serena Williams saying she’s out due to the flu, and Roger Federer not hitting court because of knee surgery – a real shame as he’s played in the tournament every year for the last six years (he does call Dubai his “second home” after all).

But there are plenty of big names still to see, including Petra Kvitova, Simona Halep, Stan Wawrinka and Tomas Berdych. But without a doubt the biggest name flying into Dubai is World No 1 Novak Djokovic. We chatted to the friendly star ahead of the Dubai tournament… 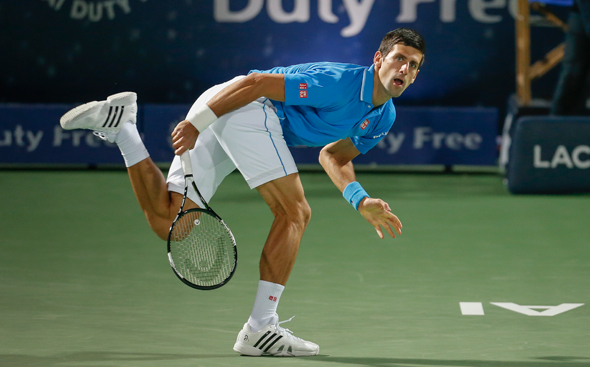 Do you remember the first time you picked up a racket? Yes, I was four years old and it was in the summer. There was a tennis camp near my family’s restaurant in Serbia and I was asked to join in. This is where I met Jelena Gencic, my first coach, who became such an important figure in my life. Unfortunately she passed away two years ago. I will always be grateful for what she did for me and what she taught me.

Are you addicted to tennis or could you give it up tomorrow? I love playing tennis and competing, so giving it up has never crossed my mind. I do have other interests in my life though, especially healthy food.

What are your goals for the 2016 season? First of all to stay healthy and happy, and continue to enjoy playing tennis.

What are your memories of your first visit to Dubai? It was my first time playing the tournament in 2007. Dubai is a very exciting place with a lot of interesting things going on at all times.

Your favourite restaurant in Dubai? There are a lot of good places in Dubai but I don’t have a favourite one.

Being a tennis player involves a lot of travelling. Do you enjoy it or is it a grind? We players are very privileged to be doing what we love for a living and the long travels are just a small sacrifice. I certainly enjoy visiting many different countries during the year and I am always curious to find out about traditions and lifestyles.

Apart from your racquets, what’s the one item you take on the road? My phone, in order to chat with my wife and my son if they don’t travel with me. If I am allowed another item, that would be a book, as there’s always one in my bag.

It’s the morning of a big match. What do you eat? Green juice, fruit and anything fresh and local from the place where I am.

Who’s your dream doubles partner? I played doubles at an ATP event with both of my brothers and that was my dream.

Last weekend on Earth. What city are you playing tennis in? My home country, Serbia.

MORE ON THE EVENT

– The global tennis championship started out as the Dubai Men’s Open in 1993 – and the women’s tournament began in 2001.

– The stadium is right next to the Irish Village, and Century Village, so there are plenty of food and drink options around.

– This Tuesday (February 16) is Ladies Night at the tennis – which means there will be a style competition at the Tennis Village at 6pm. The top 10 finalists will win prizes. How very day-at-the-horses.

– On Thursday February 25, there will be a Fantastic Fan Day at the event – fans are encouraged to turn up dressed as their favourite player, winners will bag everything from tickets to the men’s final to dinners at Jumeirah Creekside Hotel.

Dubai Tennis Stadium, Garhoud, Dubai, Dhs75 (many of the men’s days are sold out, but the women’s days still have tickets available). Tel: (04) 4172415. Metro: GGICO. dubaidutyfreetennischampionships.com

News
Sport & Fitness
EDITOR’S PICKS
What’s On Nightlife Awards 2021: Here are the nominees...
READ MORE
It's back! What's On Lock In returns to Media One Hotel
READ MORE
Arts and culture: 5 spots we can't wait to visit at Expo 2020 Dubai
READ MORE
UAE petrol prices are set to decrease in September 2021
READ MORE
MOST POPULAR
Abu Dhabi: Wristband no longer required for most home quarantine
As of September 19, PCR test not required to enter Abu Dhabi from UAE
This new family-friendly brunch includes free cinema tickets
Pics of the week: Your best photos of the UAE
How to use Playkey.me, the region's first supercharged cloud gaming service
YOU SHOULD CHECK OUT
Our website uses cookies and other similar technologies to improve our site and your online experience. By continuing to use our website you consent to cookies being used. Read our privacy policy here.