Hyperloop "will happen": Abu Dhabi to Dubai in under 15 minutes

Brogan Bambrogan, co-founder of Hyperloop, a proposed new mode of transportation that could take commuters from Dubai to Abu Dhabi in under 15 minutes, is in Dubai for the World Government Summit, and has said that his technology “will happen”.

Bambrogan said they hope to have a fully functional Hyperloop “in the next five or six years”, and he presented a proposed Hyperloop map for the UAE:

HOW WILL IT WORK?

The Hyperloop would be a bunch of small pods (rather than one large train) and would be on demand, leaving when you want to leave, and going directly to your chosen station.

The infrastructure will be made up of large tubes that run between destinations, and the pods will hover in these (they’d levitate rather than be on tracks). They will then control the environment within the main tube so that there will only be a very small amount of air in the environment, creating a suction of sorts, so that the pods move from one end to the other (very, very quickly – kind of like a parcel in a postal shoot). They’re working on plans to run them either underwater or above ground.

If they built one from Dubai to Abu Dhabi there would be two tubes, one for each direction (and our commute time would go down from 90 minutes to 15 minutes).

“Inside the tube there is no turbulence, it’s absolutely an elevator,” Bambrogan, who is also the CTO of Hyperloop Technologies Inc, explained of the technology.

“We love our transportation so much that we often use it to congestion,” he added of why we need to innovate in terms of transport.

The technology is based on a white paper published by famous inventor Elon Musk in 2010 that provided the framework for a hyperloop (the fact he published it as a ‘white paper’ means its an open source design, and Musk welcomes anyone to try and build it – which is what Bambrogan’s company is doing).

Bambrogan talking at the Summit

The company believes they can deploy and operate Hyperloop more cheaply than the current cost of high speed rail.

“We honestly believe Hyperloop will be almost free to ride in the next 10 to 15 years,” Bambrogan said at the Summit.

“You don’t want to pay Dhs800 to go from here to Abu Dhabi,” he told the Dubai audience. “You want to pay Dhs80, or Dhs40, or Dhs20. So the innovation is not only to develop the technology, but to deliver a commercially valuable product that is going to enrich all of our lives.”

They are aiming to make a fully-operational 3-km scale prototype in Las Vegas, that they say will hopefully be running by the end of this year. 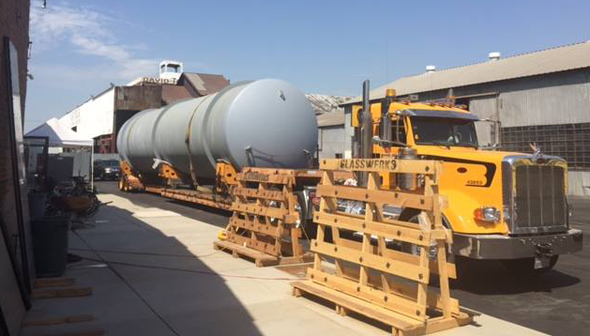 A piece of Hyperloop tube.

The company has raised Dhs1.1 billion already to build the Hyperloop, and hope to have a full system working in a city at around 2020. Maybe it’ll be the UAE? It certainly looks like that’s a strong option considering he’s here in Dubai to talk about it.

News
Transport
EDITOR’S PICKS
13 Sheikh Hamdan-approved restaurants in Dubai
READ MORE
Dubai brunches temporarily banned in new preventative measures
READ MORE
12 upcoming Dubai mega-projects we can't wait for
READ MORE
16 of the best beach bars in Dubai for sundowners
READ MORE
MOST POPULAR
St Patrick's Day 2021: The best deals and celebrations in Dubai
Dubai Police add a new supercar to their fleet
Run even faster with Under Armour's groundbreaking new trainers
Dubai Culture to grant 1,000 long-term cultural visas
This Abu Dhabi island brunch offers an amazing family friendly escape
YOU SHOULD CHECK OUT
Our website uses cookies and other similar technologies to improve our site and your online experience. By continuing to use our website you consent to cookies being used. Read our privacy policy here.