He runs multiple Michelin-starred restaurants, is all about seafood and is soon going to take over a kitchen at the Burj Al Arab.

The seafood specialist has a two-star Michelin restaurant in Cornwall called Outlaw’s Fish Kitchen, as well as a Michelin star restaurant in Knightsbridge, London called Outlaws. Oh, and he also owns a traditional UK pub called The Mariners (he told us he couldn’t resist on the latter, he just loves pubs that much).

A dish from his Fish Kitchen restaurant that sums up his cooking philosophy – simple yet with strong technique, allowing the seafood to shine: 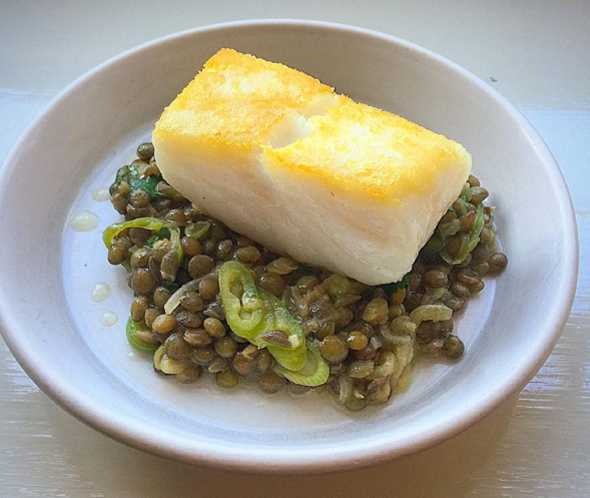 So how did this new gig come about for the chef who has worked with masters like Rick Stein, Gary Rhodes and Eric Chavot? Well, Anthony McHale, who became the Burj Al Arab’s managing director in 2014, just happened to be out for dinner at Outlaw’s Cornwall restaurant, and he loved it so much he approached the 38-year-old about coming to Dubai. When Outlaw found out the gig would be at the iconic Burj Al Arab, he said yes: “It’s the most luxurious hotel in the world, and a once in a lifetime opportunity.”

Outlaw was in Dubai this week for Taste of Dubai, and to showcase his food to some Al Mahara diners, serving up crispy oysters in a deliciously unusual cucumber, oyster and caviar sauce, as well as a slowly baked piece of turbot in a hollandaise with a twist (Outlaw says he likes to use olive oil instead of butter in his hollandaise to give the sauce a lighter touch).

Oh, and he also dished out a treacle tart with raspberries, saying he plans on making the dessert menu at Al Mahara a study in the best of British puds.

Here’s the menu he cooked up for the Burj Al Arab sneak peak: 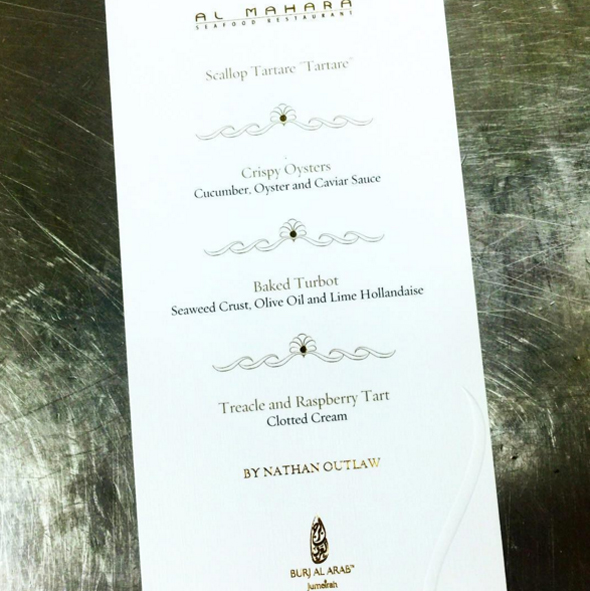 While Outlaw’s specialities include dishes with Cornwall’s finest fish and Irish oysters, the chef did tell us that he plans on going out fishing in Dubai to try and find some great local and sustainable fish that his team can cook up at the luxury restaurant. He said he’d like to find species that not many other Dubai spots are serving on their menus.

With the menu completely revamping, the interiors of the restaurant will too – while keeping the aquarium the focal point.

So how often will Nathan actually be here? He plans on coming flying in several times a year at least, while his hand-picked head chef will run the restaurant year-round.

Here’s some more of Nathan and his team’s creations for you to drool over:

Best of
Eat & Drink
News
Restaurants
EDITOR’S PICKS
Here's the full list of UAE public holidays in 2023
READ MORE
23 incredible things to look forward to in the UAE in 2023
READ MORE
Hidden gems: 10 UAE desert pop-ups to discover this winter
READ MORE
Where to travel in 2023: 10 new flight routes from the UAE
READ MORE
MOST POPULAR
Pics of the week: Your best photos of the UAE
Dhow & Anchor has got you covered every day of the week
RTA: All the road closures you need to be aware about
Review: The Nice Guy Dubai
Masha and the Bear is coming to Abu Dhabi this April
YOU SHOULD CHECK OUT
Our website uses cookies and other similar technologies to improve our site and your online experience. By continuing to use our website you consent to cookies being used. Read our privacy policy here.