Filming for the Bollywood movie Dishoom, directed by Rohit Dhawan, wrapped yesterday after a six-week shoot in the capital. The production, which was facilitated by twofour54, saw Bollywood heartthrobs John Abraham, Varun Dhawan and Jacqueline Fernandez film scenes around the emirate for the upcoming action-adventure-comedy.

What’s On spoke with Bollywood stars John Abraham and Varun Dhawan (plus brother Rohit) about what you can expect in the cinema come July, that helicopter stunt on Reem Island and just who has the best dance moves.

Tell us about the film.

Rohit Dhawan: So basically it’s a manhunt that spans 36-hours with two cops from two different countries. An Indian from a special task force [played by John] teams up with this Emirati-Indian rookie [Varun], who is just out of the academy. Both these guys team up on this crazy action adventure and investigation. It’s a buddy cop dynamic that harks back to Lethal Weapon, 48 Hrs., Rush Hour and Bad Boys. 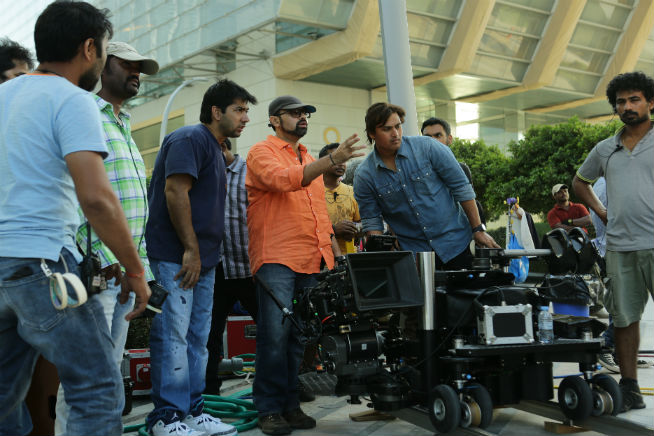 How would you describe your character?

John Abraham: No-nonsense cop. You mess with me I’ll crunch your bones. [Laughs]

Varun Dhawan: Junaid is a rookie cop and he’s kind of discovering himself as the movie goes on. He has a ‘boy becoming a man’ arc in the film. I can’t reveal too much right now, but I will tell you he is very honest.

What was the most physically taxing stunt you did on the shoot here in Abu Dhabi?

JA: I don’t think there was anything physically taxing in this film – please bear in mind, I’m coming from Force 2 and Rocky Handsome, they were far more physically taxing films. But this is a lot of fun; the action on this is very different. More than taxing yourself physically it is important to trust harnesses and trust cables that are actually holding you onto a chopper. So I think it is mentally more taxing if you feel you aren’t going to be safe at that height, but all in all, it’s been fantastic.

VD: When we were in Morocco and we shot some stuff on the bikes I thought that was pretty hardcore. But then we shot in the marina with the speedboats and I was like, whoa we really pushed ourselves. But I think when we did the helicopter bit yesterday [On Reem Island] everyone was shocked at the sheer scale of it.

Was that the scene where you were hanging from the helicopter?

VD: Yeah that’s the one. When you imagine it, it seems like fun but I think doing it was something else.

Did you use a stunt double?

VD: No, no, no. We did everything. I think that’s one of the perks when your brother is directing the film, and especially your elder brother – he bullies you into doing everything yourself.

I was lucky I had John by my side. John is a proper action movie star, he has done so much action over the years, so John really comforted me. He told me to take my time, be comfortable. He really was there for me.

Are you afraid of heights?

When I was just hanging and looking down at the ground, I was just psyching myself out. I sucked it up and eventually once it happened, I felt like the bird. It’s one of the best experiences of my life – honest.

John, what were the best bits of action you did while you were in Abu Dhabi?

JA: I think the last four days that we’ve shot, the chopper sequence. That’s been a lot of fun for us. We get paid to go round and round in a chopper so it’s fantastic. Then we had a speedboat sequence. Varun drove the speedboat and I was just standing next to him and kept getting thrown around all over the place. I kept telling Varun to just go a bit slow but he was like flying over the waves. It was a fantastic experience on the whole.

How did you handle the family dynamics on set?

JA: I think of my brother when I see both of them arguing. I just watch them and am bemused. Rohit is a very fair boy, he is concerned about how his films are going to look he doesn’t care if its his brother, John Abraham or Obama standing in front of him. He is only concerned about his film. That’s what I really appreciate about Rohit.

How did you stay in shape for the film?

VD: I tried to work out two days, put in some extra hours. I’d get up early in the morning and go to the gym then finish filming and go again in the evening. I’d eat right and just train every day basically. 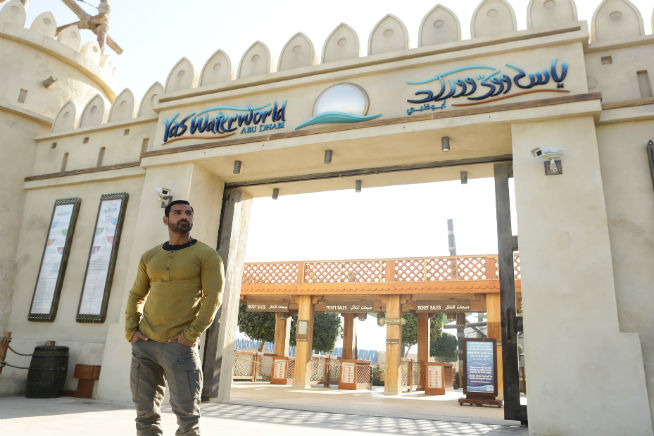 Any thoughts about the scene you and John shot in Yas Waterworld?

VD: I’m quite happy with the way the sequence came out. It is quite funny, a fun sequence and hopefully a lot of people will enjoy that.

RD: I don’t think I needed to put any pressure [on Varun] because standing next to John is pressure. If you’ve got John there in the frame you really have got to keep up with that.

Tell us more about that Akshay Kumar cameo.

RD: He’s riding a jet ski in the pool [of Yas Waterworld]. That is his introduction and the two cops go and interrogate him regarding this case that’s going on. He really enjoyed it; he’s always up for action and adventure when he comes.

How would you describe your co-stars?

VD: It’s a family, for sure. And I don’t say this because my brother is directing the film but I genuinely feel like John is an elder brother, he protected me, looked after me, made sure I didn’t get hurt. In fact, in every action sequence I did with John I didn’t get hurt. The one I did alone I passed out in – so it’s quite funny.

Jacqueline and me get along really well because our humor is the same. She is a crazy person and so am I, so I think we match in that sense.

JA: Rohit is a lovely boy, he’s the next big thing. He is going to be a huge director. I always say he is like the Michael Bay of India. He thinks big.

Dishoom has a very special element and that’s Varun. He brings a lot of lighthearted humour to the whole thing. There’s a certain sweetness that there is in our relationship that is so beautiful. I told Rohit, there’s going to be a Dishoom 8. This is just the beginning. These two guys will solve all the world’s problems.

What about the music for the film?

RD: Music played a big role in my first movie (Desi Boyz) but I haven’t really got down to the music on this one because this has been a really hard film just on execution level. So I go back [to India] and sit down with my music director and really need to crank out two songs right away.

RD: Just two songs. Like I told you, it’s a crazy, 36-hour manhunt so there’s no room for the cops to break into a jig.

Be honest, who’s the better dancer?

JA: Varun beats me hands down. Varun can dance on two left feet and beat me hands down! He is a far better dancer than I am but to be fair to the character in this film, I’m not really supposed to be dancing you know? And I want to stay true to my character. Let me be safe.

Film
News
Things to do
EDITOR’S PICKS
What’s On Nightlife Awards 2021: Here are the nominees...
READ MORE
It's back! What's On Lock In returns to Media One Hotel
READ MORE
Arts and culture: 5 spots we can't wait to visit at Expo 2020 Dubai
READ MORE
UAE petrol prices are set to decrease in September 2021
READ MORE
MOST POPULAR
Abu Dhabi: Wristband no longer required for most home quarantine
As of September 19, PCR test not required to enter Abu Dhabi from UAE
This new family-friendly brunch includes free cinema tickets
Pics of the week: Your best photos of the UAE
How to use Playkey.me, the region's first supercharged cloud gaming service
YOU SHOULD CHECK OUT
Our website uses cookies and other similar technologies to improve our site and your online experience. By continuing to use our website you consent to cookies being used. Read our privacy policy here.