It’s created a huge stir on the Dubai foodie scene but is London-based restaurant Burger & Lobster the real deal?

Ever since Burger & Lobster opened in London’s Mayfair in 2012, it’s been a raging success. It pretty much invented the limited-repertoire restaurant by offering only an underpriced lobster and an overpriced burger. There are now almost a dozen outlets in the UK, with other outposts in Sweden, Kuwait and New York.

It’s hardly surprising then that the brand new Burger & Lobster outpost in Dubai has been packed from day one. We dialled the restaurant about 20 times on the first Friday it was open, and every time the line was busy, such is the hype surrounding the London brand.

Hidden inside the new Burj Daman building, behind DIFC, diners walk through a corridor of lobster tanks to get into the restaurant (this is either appetising or eerie depending on where you stand on shellfish rights). 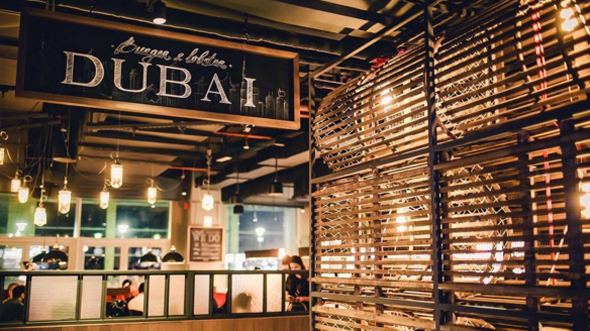 The décor is more diner than bistro – with red leather booths, little art on the walls and lots of dark wood. In fact, the room feels so slick and franchise-like that it almost looks like an architectural rendering rather than a lived-in space.

As we sat down the waitress passed us a drinks menu and said, “For the food, I am the menu.” She then explained that there are only three dishes: lobster, steamed or grilled, a beef burger or a lobster roll. Each one comes with a standard side salad and fries (of the shoestring variety). Each one is Dhs127. 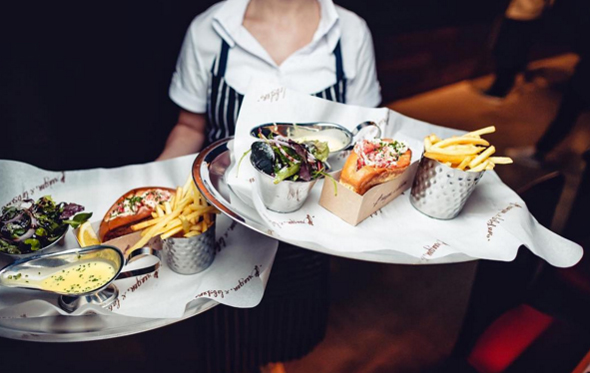 The burger was good – the meat clearly top quality, and the smoked cheese tasty. Other highlights included good use of gherkin and a soft yet manageable bun.

The lobster roll was fantastic  – the white meat succulent and sweet, and the brioche bun about as delicious as a bread roll can get. 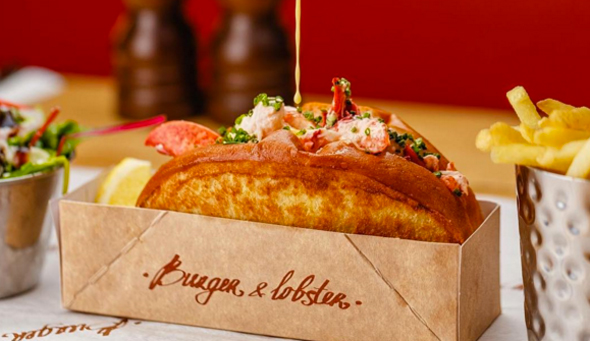 The star of the show though was the whole lobster, grilled and simply accompanied by a lemon butter sauce. It was just charred enough, the sauce portion was perfectly generous and it was clear the lobster itself was very fresh. How could we tell? Well the texture was perfect – not grainy at all – and the lobster meat was sweet. The juiciest part was the claw meat, so don’t be afraid to get messy and use the utensils provided.

The lobster is clearly the best value dish, and we can’t help but think the Dhs127 burger is subsidising the Dhs127 lobster. Because, let’s be honest, Dhs127 is too much to pay for a burger with fries, but it’s a pretty good deal for a whole fresh lobster that’s been sourced from Nova Scotia.

As we walked out of the restaurant at 2pm there was a line of hungry hopefuls snaking out the door keen to get a table (with the staff looking suitably harangued). But you can avoid a wait if you’re organised, as unlike the London branches, Burger Lobster Dubai does take bookings.

Will we go back? Yes. Sure, it’s a glorified surf and turf shack, but it’s also the best lobster we’ve had in Dubai for a while.

Atmosphere: Lively with a diner feel

Eat & Drink
Restaurants
EDITOR’S PICKS
13 Sheikh Hamdan-approved restaurants in Dubai
READ MORE
Dubai brunches temporarily banned in new preventative measures
READ MORE
12 upcoming Dubai mega-projects we can't wait for
READ MORE
16 of the best beach bars in Dubai for sundowners
READ MORE
MOST POPULAR
St Patrick's Day 2021: The best deals and celebrations in Dubai
Dubai Police add a new supercar to their fleet
Run even faster with Under Armour's groundbreaking new trainers
Dubai Culture to grant 1,000 long-term cultural visas
This Abu Dhabi island brunch offers an amazing family friendly escape
YOU SHOULD CHECK OUT
Our website uses cookies and other similar technologies to improve our site and your online experience. By continuing to use our website you consent to cookies being used. Read our privacy policy here.