Dubai Municipality has revealed the new projects they’ve got planned for Dubai, including a ‘vertical’ city and the ‘Dubai steps’.

More ambitious buildings and attractions are coming to the city: yesterday, H.H. Sheikh Mohammed, ruler of Dubai and Vice President of the UAE, paid a visit to the Dubai Municipality offices to find out about the new projects planned, and he gave many of them the go ahead.

– Further plans for the area being built in Al Jaddaf (near the Palazzo Versace hotel and across the creek from Dubai Festival Centre) were announced. The main element revealed is an egg shaped convention centre that will be spread across five hectares and will have a 7,000 seat capacity hall called Rashid Hall. The centre will also be home to offices and two hotels. It will be next to Mohammed Bin Rashid Library. Here’s what the plan looks like, you can see the egg shaped centre sitting just in front of the book-shaped library to the right of the image: 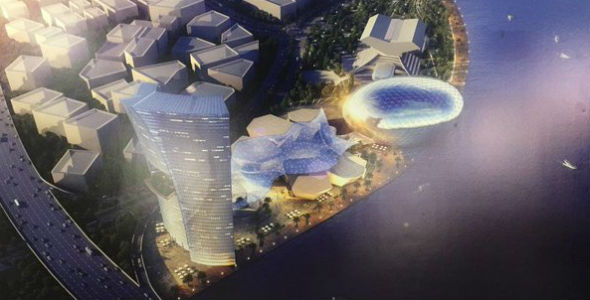 – They also discussed a project called ‘Safari Golf’, which, yes, will involve golf. There will be a golf academy and the whole thing will be spread over 100 hectares (the average golf course is about 30 hectares). What exactly the ‘safari’ element of the project will be is unclear, although WAM did report that the “safari project will be open to everyone with a fee to be set by the municipality”.

*READ THIS: Sheikh Mohammed’s inspiring letter on the future of the UAE*

– One of the most intriguing announcements was that of the Dubai Stairs project, and while details are scant it’s been billed by the Dubai Municipality as “a cultural and sports project” that will consist of 500 stairs that, as you can see, hang up high in the sky and feature vertical gardens. The location hasn’t been set, but the renderings below make it look like it will be near the water and across the Creek from the Burj Khalifa: 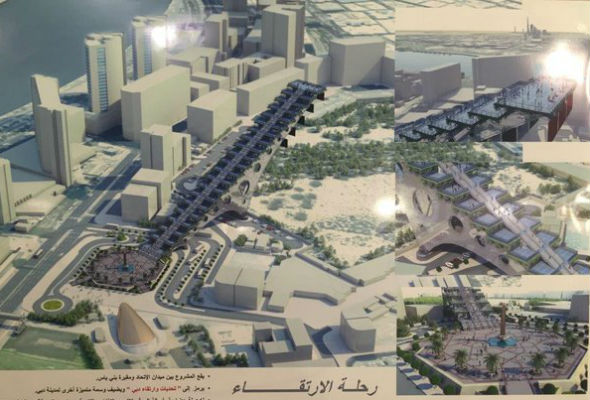 – The intriguingly named Dubai Vertical Industrial City was announced for the Al Layan area of Dubai (behind Arabian Ranches and near Al Qudra Lakes). This will be a 280 hectare “fully integrated” industrial city made up of four parts – industrial buildings, residential buildings, hotels and a business park. Here’s what it will look like: 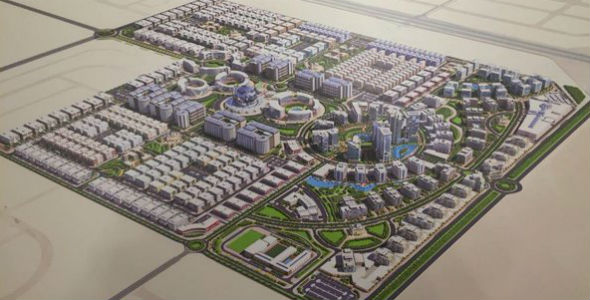 – The Municipality also announced that they’re building a 460,000 square feet Hardware and Bicycle Market in the Al Warsan area of Dubai (near International City). The market will be finished by the end of September 2016 and will feature 53 bike showrooms as well as shops selling construction materials and four solar power generation panels.

*OTHER NEWS: What the Dubai Canal project will bring to the city*

– In a less glamorous but very important announcement, Dubai Municipality also confirmed that they are going to start work on a network of sewage tunnels across the city. The network will be complete by 2020 and will be made up of 121 pumping stations and sustainable tunnels that last for up to 100 years. The project should help cut the carbon emissions currently put out by Dubai’s sewage system.

As part of Dubai Municipality’s goal to turn Dubai into a sustainable city by 2021, Sheikh Mohammed also signed the ‘palm document regulations’ yesterday, which will evaluate green buildings. This means bronze, silver, gold and platinum ‘palm’ awards will be given to developers who build green buildings.

*READ MORE: Dubai wants to be the most sustainable city in the world by 2050*

The classification will begin in October and it hopes to slash carbon emissions by 34 per cent.
Here’s video of Sheikh Mohammed and Sheikh Hamdan evaluating the projects yesterday:

A video posted by Dubai Municipality بلدية دبي (@dubaimunicipality) on Apr 5, 2016 at 11:26am PDT

Culture
News
EDITOR’S PICKS
What’s On Nightlife Awards 2021: Here are the nominees...
READ MORE
It's back! What's On Lock In returns to Media One Hotel
READ MORE
Arts and culture: 5 spots we can't wait to visit at Expo 2020 Dubai
READ MORE
UAE petrol prices are set to decrease in September 2021
READ MORE
MOST POPULAR
Pics of the week: Your best photos of the UAE
How to use Playkey.me, the region's first supercharged cloud gaming service
The Mai Dubai half marathon is back in October
Exhibitions, workshops and more to experience at Sharjah Art Foundation
New Irish pub McCafferty's opens second venue in Dubai
YOU SHOULD CHECK OUT
Our website uses cookies and other similar technologies to improve our site and your online experience. By continuing to use our website you consent to cookies being used. Read our privacy policy here.