Why you should go see DJ Sasha in Dubai this weekend

Just when you think you have the full measure of Sasha, the legendary DJ and producer throws a curveball – or two…

It’s 10am on another bright and sunny morning in springtime Los Angeles. For Sasha it’s the morning after the night before – the night before being the launch party for his new album, Scene Delete. And yet, what’s this vision of sprightliness standing before us? Where’s the tell-tale signs of another dishevelled party gone into overdrive? Would the real Sasha please make himself known?

“I didn’t really get involved in any of the festivities,” the man also known as Alexander Coe laughs conspiratorially. “It was more like business. Not like my album launches of previous years.”

Again he bursts into knowing fits of laughter. It was, he concedes, a good night though. He played some new music that he’s been working on – the result of a breathtaking period of sustained productivity, more of which later – and the aforementioned Scene Delete, the reason for everyone clinking glasses, was given a spin to appreciative nods. “I saw some old faces, met some new people. It was good,” says Sasha.

Since its release earlier this month, unbridled positivity extends to Scene Delete; an album that was never intended to be such a thing, made by an artist who has, shall we say, something of a vexed relationship with the idea of albums in any case. The origins of the album can be found in a number of TV and movie pitches Sasha and his production team – David Gardner and ThermalBear – had been working on. The trio were constantly working on ideas, from beautifully melodic spectral pieces of ambient music to Sasha’s more archetypal club tracks.

*IN PICTURES: The Hype Awards Party*

However, when none of the TV or film projects got the green light, Sasha was left with a mountain of work that he didn’t know where to place. And then he heard Jon Hopkins’ Late Night Tales album, a collection of music that he readily admits he became obsessed with.

“Listening to that inspired me,” he recounts. “I realised that I could put all of this ambient-like music in one place. So I called the Late Night Tales folk up and sent them over all this music. Now normally Late Night Tales is a compilation series, but they listened to these 40-odd pieces of music and said, ‘Why don’t we do something different? Do an artist album?’

“So we locked ourselves in the studio last October. I think 60 per cent of the album was already written, maybe half, but a lot of the older stuff had to be updated and put through our new production techniques. We burned through it and in seven or eight weeks it was done. It’s probably the fastest I’ve ever worked on a record.”

The result is a spellbinding suite of music – nominally 21 tracks – that flows in one continuous 75-minute mix. There are hints of beatific Ibiza after parties in there, plenty of experimental found sounds, some cold electronic magnificence and plenty of otherworldly head music perfect for being transported to places only your imagination can serve. It goes without saying that it is very, very cinematic.

“When I put music on at home, especially if I’ve been working in the studio on stuff with beats, I like to purge my system by listening to tripped out electronic scores,” says Sasha. “Also, old minimalist stuff like Philip Glass and Steve Reich. I love Cliff Martinez; he’s probably my favourite composer working in film at the moment. I love the score he did for The Knick. Also Clint Mansell and Trent Reznor’s scores. I loved Trent Reznor’s score for Gone Girl. I listen to a lot of that type of stuff when I’m trying to clear my head out. I like to listen to a lot of ambient and score kind of music; stuff that doesn’t have too many beats, really.” 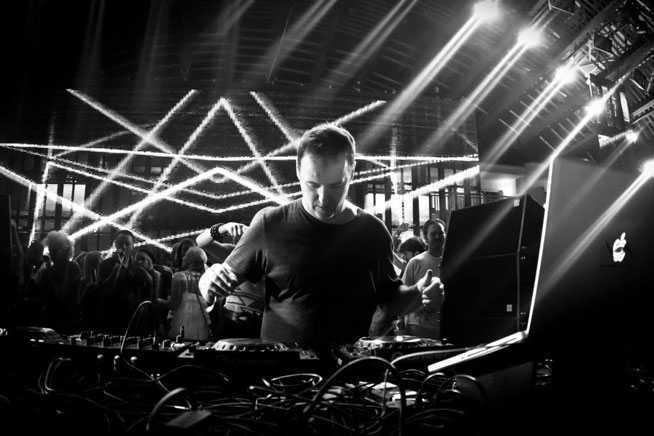 And while those who are only familiar with Sasha thanks to his 25-years-and-counting adventures in acid house might see this downtempo excursion as something of a departure for the original superstar DJ, working on Scene Delete was a familiar exercise for the producer. “When I’m working on melodic ideas, even if they end up on club tracks, I like to work without beats,” he explains. “I’m always writing melodic things, musical phrases and movements, and then, quite often recently, the last thing that gets done is the beats.

Once the intention was there to assemble these pieces of music together (at one point he pondered the idea of releasing all the music he’d made, club tracks and ambient sounds, in one “gigantic” album – “It was battering my head,” he admits) the rest flowed quickly. The darker pieces were pulled back (“The movie we nearly worked on was really violent and dark. Lots of murders and bodies being buried in the desert”) and from there the album really took shape with Sasha based in LA, and Gardner and ThermalBear working out of a studio in London.

Sasha worked out of the infamous Village Recording Studios, where anyone and everyone in the music industry has passed through. During his recent stretch there, on any given day hip-hop legends Snoop Dogg or Busta Rhymes might walk through the door. If not them, West Coast folk rock royalty Neil Young or Stevie Nicks were also working in the historic building. Which, of course, leads one to imagine Nicks’ haunting vocals carrying one of Scene Delete’s enigmatic electronica pieces to far-flung Gothic pastures. Sasha laughs in wonderment: “That would have been phenomenal, wouldn’t it?”

So with a pleasing state of equilibrium to be found between his production work (“This has been the most productive six months of my career”) and touring (“I was DJing pretty much every weekend, the balance was off”), Sasha prepares to hit Dubai once more in an excited state of mind. “I’ve always had a great time in Dubai,” he says enthusiastically. “Yeah, some people are surprised when you say that. But I’ve always had brilliant events there. There’s a great expat community there. They’re a very responsive crowd – they do like to let loose and dance.”

Which is where we leave The Man Like – looking forward. In truth, it’s where you’ll have found the dance music legend at any point since the fresh-faced Alexander Coe first frequented the Haçienda in that seismic year of 1988. He’s not one for looking back. The inquisitive pulse that turned him onto electronic body music back on the floor of the Haçienda still beats hard. “I don’t like getting nostalgic,” he concludes, “it makes me feel a bit old. I’ve been asked to do a lot of things where the line-ups were more… I’d say they were heritage line-ups. People want me to play old sets and go back to Shelley’s or Haçienda-type music. I just can’t bring myself to do it. I’d rather be playing a load of brand new techno.”

If Sasha’s Scene Delete album came as a welcome surprise, the DJ and producer was far from done. Just days after talking to Hype, Sasha showed up at the Bedrock Easter bash, at Ministry of Sound in London, to play with John Digweed – the first time the two legends have played back-to-back since 2010. The surprise sent clubbers at MoS into a meltdown and the internet into a frenzy.

Days later, it was revealed that the pair will re-unite for more b2b shows, kicking off at the UK’s The Social Festival, on September 9.

Digweed said the reaction to their unannounced back-to-back set at Bedrock, “which took everyone by surprise”, had been “incredible”, and Sasha added that he was “very happy to be playing with John again and blown away by the excitement around our comeback”.

All you need to know about the Sasha gig…

What: Sasha at Eden Beach Club
Where: Rixos The Palm, Palm Jumeirah, Dubai
When: Friday, April 29, 10am to 11pm
Why: Re-balanced, refreshed and re-invigorated, it sounds like Sasha is back on top form. Check out his Last Night On Earth show on Soundcloud to get you in the mood for his latest Dubai gig
How: Taxi to Rixos The Palm
Cost: Free after sunset
Info: facebook.com/edendubai
Heads up: Joining Sasha at Eden is Joris Voorn, Diamond Setter and resident KayTek

Clubs
News
Nightlife
EDITOR’S PICKS
What’s On Nightlife Awards 2021: Here are the nominees...
READ MORE
It's back! What's On Lock In returns to Media One Hotel
READ MORE
Arts and culture: 5 spots we can't wait to visit at Expo 2020 Dubai
READ MORE
UAE petrol prices are set to decrease in September 2021
READ MORE
MOST POPULAR
This green Abu Dhabi space will stage a pub garden with live music
Treat yourself with the ultimate comfort food at Denny's
8 spots to enjoy a free cup of coffee this weekend
It looks like Khalid and Lewis Capaldi are headlining the Abu Dhabi F1 concerts
Stunning mountain retreat Six Senses Zighy Bay is reopening in Oman
YOU SHOULD CHECK OUT
Our website uses cookies and other similar technologies to improve our site and your online experience. By continuing to use our website you consent to cookies being used. Read our privacy policy here.