Grab your walking boots and spend a weekend wandering the ancient streets of Georgia’s capital, Tbilisi…

A weekend in Tbilisi, the intriguing capital of Georgia, can be summed up in three words: history, bread and cheese – what more could you want from a weekend getaway?

The sparkling modernity of Dubai feels a million light years away in comparison to the Georgian capital’s gruff exterior, potholed roads and ramshackle cars. But within hours, you’ll have fallen in love with this alluring and historic city.

From the charming Georgian houses leaning at precarious angles, to its many forts and ruins, not to mention its seriously delicious cuisine – Tbilisi is an ancient city with a backstory almost as impressive as the grapes it produces in its vineyards.

4 things to do while you’re there…

Tbilisi packs both history and modernity into a smallish valley that’s flanked by dramatic hillsides on either side of the Mtkvari River. Head up the rugged outcrop beside the river and you’ll see where Tbilisi all began. 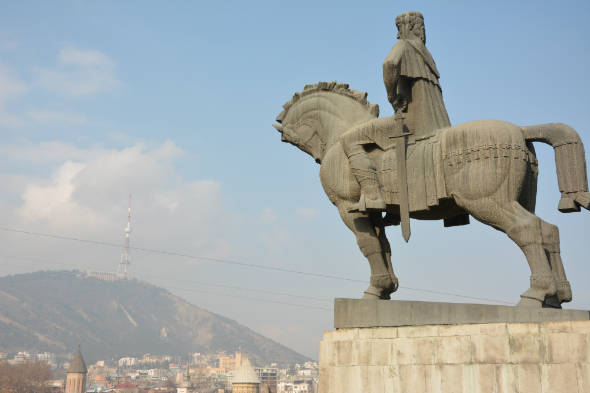 King Vakhtang Gorgasali – whose statue stands triumphantly, looking out towards his city – founded Tbilisi in the fifth century. The term Tbilisi derives from the old Georgian word for warm, which, legends say, come after the king’s beloved hunting falcon fought a pheasant and they both fell into the natural hot springs.

The main attraction, however, is Metekhi, the first church to be built in the city. Much like a lot of Tbilisi’s structures, Metekhi has been rebuilt repeatedly over the centuries, but step inside and you’ll see its walls are adorned in murals and gold.

If there’s one thing Tbilisi does well it’s a view. For the very best head to the top of Mount Mtatsminda via the funicular, a cliff railway that was built back in 1905. Fortunately it’s been updated since then. 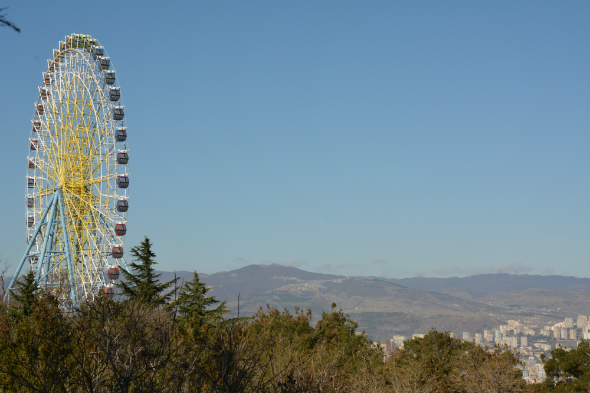 At the top you can grab a bite to eat at the Funicular Complex or, like us, explore the rather surprising amusement park complete with Ferris wheel, roller coaster, haunted house and a log flume ride. If you need a pit stop, head to the small outdoor café, which serves up delicious cheese pies and stews. funicular.ge

On a hill overlooking the old town is Narikala Fortress. Originally built as a Persian fortress in the fourth century, sadly only the walls remain. But hop on a nifty cable car (or face the thigh-burning stair climb), and scramble around the ruins for some stunning city views.

Only St Nicholas Church remains in tact, but it’s only 20 years old – the original 13th century structure was blown up during the Soviet occupation. 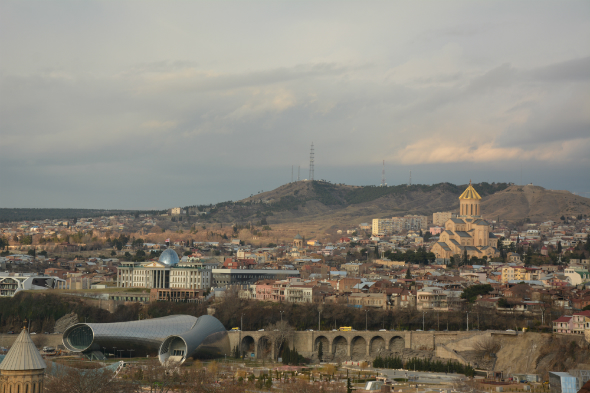 While you’re up there, pay a visit to Kartlis Deda or Mother Georgia. Residents have mixed feelings about the huge, gleaming aluminium statue, but as she stands with a cup of wine in one hand and a sword in the other – she makes the perfect metaphor for Georgia – proudly welcoming guests but passionately defending its land.

You’ll find some of the city’s grandest buildings along the central Shota Rustaveli Avenue, including the Museum Of Georgia. Apart from the odd school group, the museum is often very quiet, allowing visitors the opportunity to explore some fascinating and sometimes obscure exhibitions, from ancient Egyptian artefacts to historic weaponry.

To get to the heart of Georgia’s people and understand their recent history, head straight up to the top floor to its Soviet Occupation exhibition. The country’s history tends to get lost in the noise of the Cold War, but this exhibit covers the 70 years of occupation up to their independence in 1991. museum.ge

Tbilisi is a walking city worth exploring, so make the most with these free walking tours… 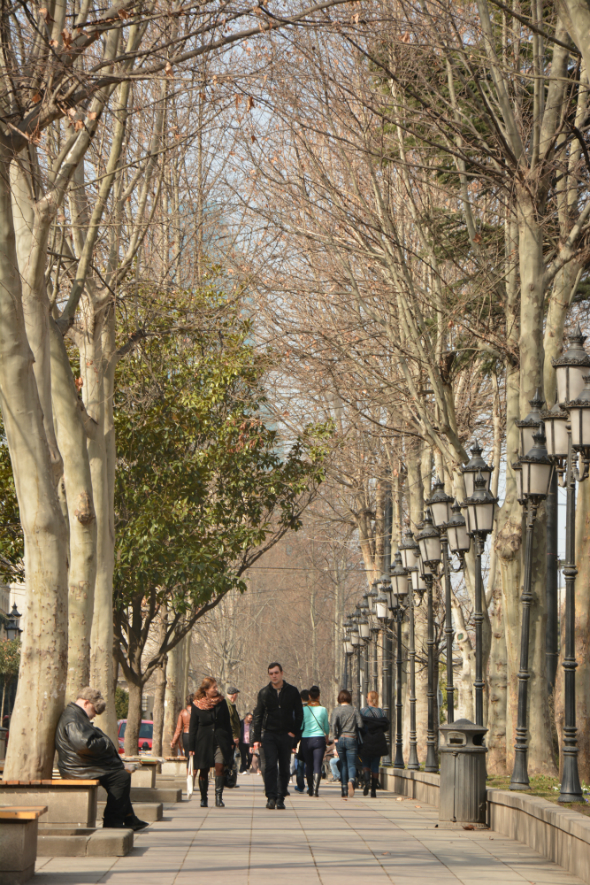 This popular city tour is run by yellow T-shirt clad volunteers. Over two hours, it takes in the old town, starting out near Freedom Square and covering Peace Bridge and the central Rustaveli Avenue. exploreoutdoor.travel

From Freedom Square and its gleaming statue of St George, this three-hour tour runs from midday everyday. The well-informed guides cover everything from the old – the sulphur baths and old city wall – to the new modern side of Tbilisi. tbilisifreewalkingtour.com 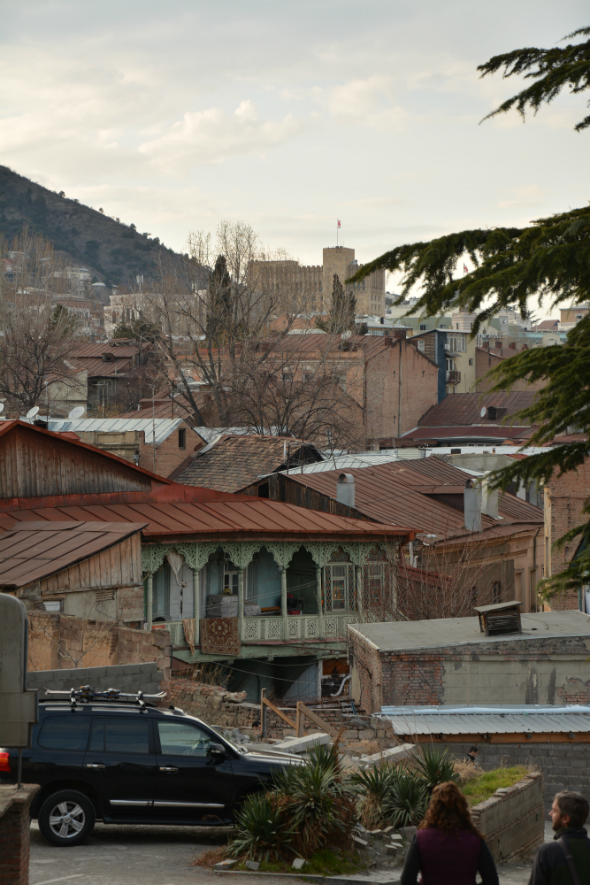 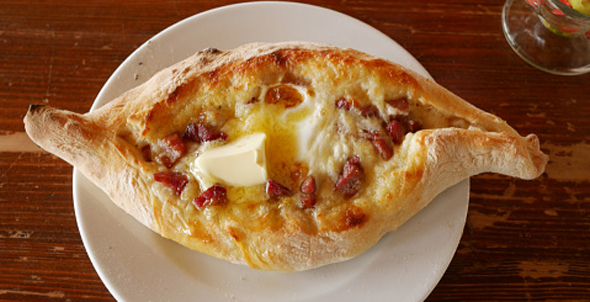 This national delicacy comes in different forms, but the most famous is adjarian khachapuri – a fluffy bread boat filled with cheese butter toped with a couple of fried eggs. It’s not one for the health conscious, but it’s undeniably delicious.
1 Leonidze, Giorgi Leonidze Street, Georgia. Off Freedom Square

They look like hefty Asian soup dumplings, but these popular parcels are strictly Georgian (and remnants of the Mongol empire). You can find them everywhere but Samikitno has every filling available.
Samikitno-Machakhela, Freedom Square, 5-7 Aleksandr Pushkin St, Tbilisi, Georgia 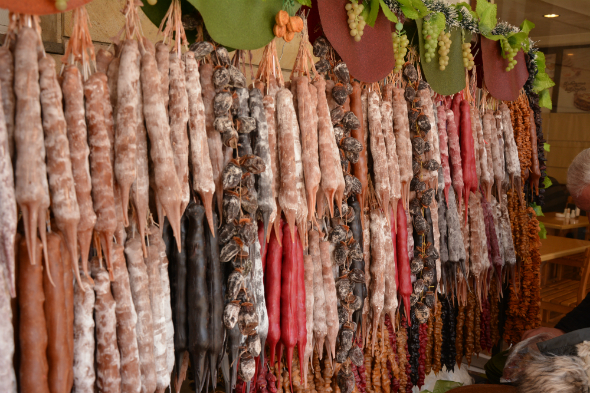 No, they’re not sausages. They’re actually strings of nuts coated in a sweet fruit casing – described by one man as a Georgian Snickers bar – and they’re very tasty. You’ll see rows and rows of them being sold all over the city.

A quirky budget hotel, with clean rooms that might be on the small side, but make up for it character and a tasty breakfast spread in their Tiffany Bar.
Tel: +995 322242244. riverside.ge 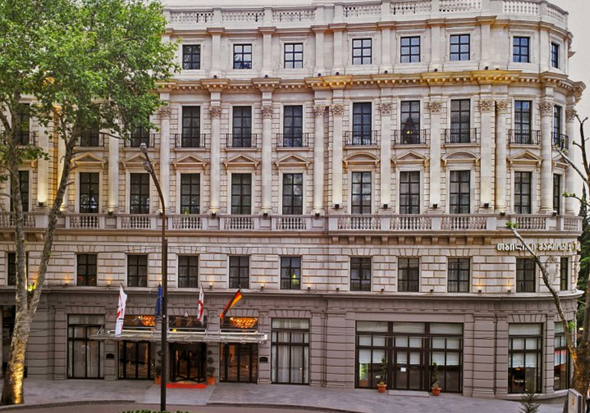 Be at the heart of the action at this luxury hotel, with rooms overlooking Freedom Square and the glistening statue of St George.
Tel: +995 322779100. marriott.com 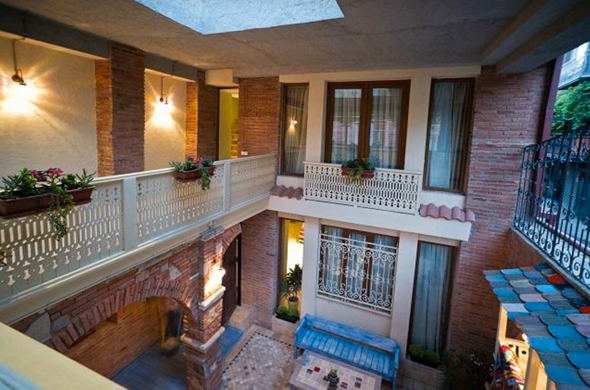 This small hotel is located in a quiet neighbourhood in the old town. The balconies offer magnificent rooms out towards the river.
Tel: +995 322552212. No12hotel.com

News
Travel
Travel Guides
EDITOR’S PICKS
Ramadan in Dubai: 48 iftars to try
READ MORE
Where can Dubai residents travel? Check out these 14 destinations
READ MORE
Rumours, facts and reveals: New Abu Dhabi bars and restaurants
READ MORE
UAE announces reduced working hours for Ramadan 2021
READ MORE
MOST POPULAR
Review: Could Hunter & Barrel be your favourite new steakhouse?
French restaurant La Serre to open in Habtoor Palace Dubai later this year
10 amazing things to do in Dubai this weekend: April 22 to 24
Sweet treats to enjoy this Ramadan in Dubai
7 chill things to do in Abu Dhabi this weekend: April 22 to 24
YOU SHOULD CHECK OUT
Our website uses cookies and other similar technologies to improve our site and your online experience. By continuing to use our website you consent to cookies being used. Read our privacy policy here.