Dubai’s first, wait for it, “permanent aqua-based show” will be in the new Al Habtoor City and will kick off at some point later this year.

Produced by cultural creation company Dragone, La Perle will see over 450 performances per year in a custom-built state-of-the-art aqua-theatre in the heart of Al Habtoor City near Business Bay.

The show will feature a cast of 65 world-class artists performing a variety of aqua and aerial feats with the assistance of 70 specialised technicians.

Inside the 1,300 seat theatre you’ll find the ‘aqua-stage’: this giant pool will be filled with 2.5 million litres of water and powered by a series of hydraulic lifts and fountains that change the stage from a dry platform to an aquatic stage, and vice versa.

*More: 15 things you’ll be able to see at Dubai Opera this year*

Unsure of what an aqua-show involves? Expect dives from heights of 35-metres into the water-filled stage, as well as performers flying around the auditorium on a series of high-powered winches.

La Perle will be similar in style to the House of Dancing Water in Macau, another aqua-based show. 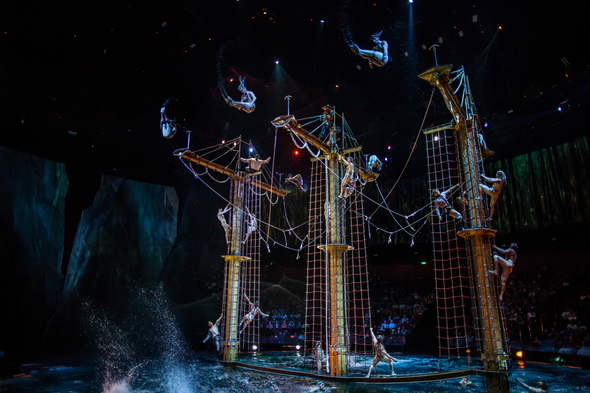 Acrobatics around pirate ships in the Macau show.

Franco Dragone, Artistic Director and Founder of Dragone said: “La Perle will be the most awe-inspiring and technically advanced theatre production I have ever produced and directed. New and unique for the region with the world’s best creative team and incredible performers, La Perle is inspired by the spirit of Dubai and will reflect the beauty and flavours of Arabia. It will be the soul of Al Habtoor City.”

Check out the trailer for La Perle below:

Some incredible stats about the show:

– The speed of every dive will be between 85 to 100 kilometres per hour.

– Artists will dive from a height of 35 metres into the aqua-stage.

– The aqua-stage holds 2.5 million litres of water – enough to fill an olympic pool.

Culture
News
Theatre
EDITOR’S PICKS
Ain Dubai will open with fireworks, live music and a drone show
READ MORE
Incredible Aura SkyPool to open in Palm Tower this November
READ MORE
Brit Grand Slam hero Emma Raducanu confirmed for Mubadala Tennis
READ MORE
What’s On Nightlife Awards 2021: Here are the nominees...
READ MORE
MOST POPULAR
Celebrate creativity at City Walk during this three-weekend event
This Heinz Beck brunch at Waldorf Astoria just got an upgrade
10 brilliant things to do in Abu Dhabi this long weekend: Oct 21 to 23
Experience Arabesque elegance at Asil's Saturday lunch
If there's one place to be this Halloween, it's Warehouse
YOU SHOULD CHECK OUT
Our website uses cookies and other similar technologies to improve our site and your online experience. By continuing to use our website you consent to cookies being used. Read our privacy policy here.