The UAE could be set for not only faster, but also cheaper internet this year.

While we recently wrote about LiFi, an uber-fast, light generated internet service that’s coming to Silicon Oasis – there are also a bunch of new submarine internet cables nearing completion that will bring faster internet to everybody in the country.

While the new cables will make providing internet service cheaper overall, the price consumers actually pay will remain up to Etisalat and du. We’ll keep you updated on any decisions on prices made by the internet service providers.

The cable upgrade will also help handle a predicted rise in data usage coming from data-heavy applications, such as movie streaming as well as increased internet usage on smartphones when 5G mobile networks get released by 2020.

*More: Hands-free calls while driving may soon be banned in the UAE*

Residents of the UAE have frequently complained about the current price of internet versus the speed of internet they were receiving, and the new cables could change that.

They will also boost the UAE’s bandwidth capacity by up to four times within the next 10 years.

*More: Modern fatwa issued against using other people’s WiFi in the UAE*

Stretching all the way from Europe to the Far East, the new cables include:

– The Asia Africa Europe-1 cable, which will be completed in Q4. It stretches 25,000km between France and China.

– The Bay of Bengal Gateway, due to be completed in Q1, stretching 8,100km from the UAE to Malaysia.

– The Sea-Me-We 5, set for completion in November, which runs 20,000km from Singapore to France.

The below picture shows all the submarine internet cables in the region and their connection points. 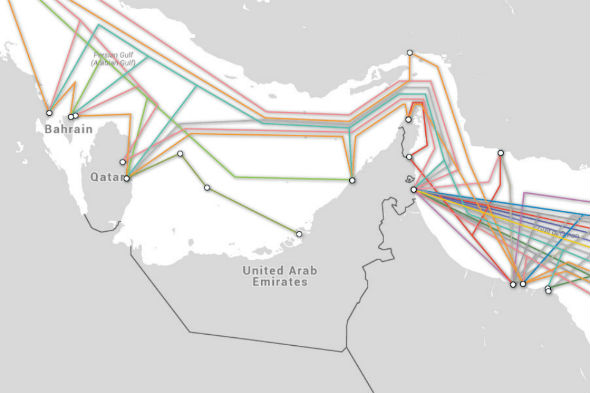 A popular landing point for internet cables in the UAE is the east coast of Fujairah, where the underwater cables plug into overwater cables which then transmit internet to the cities.

Nearly all of the world’s internet data is transported via submarine cables, as opposed to satellites. Although they’re designed for the harsh underwater environment, they have been affected in the past by the 2011 Japan earthquake, and one cable was nearly sabotaged in 2003 before the Egyptian navy caught three scuba divers trying to cut one.

News
EDITOR’S PICKS
What’s On Nightlife Awards 2021: Here are the winners...
READ MORE
Where to see fireworks in Dubai
READ MORE
This new ladies' night offers a free open bar every Tuesday
READ MORE
Coming soon: The hottest new bars, restaurants and beach clubs
READ MORE
MOST POPULAR
A new Thursday evening 90's drunch has launched in Dubai Marina
Disclosure and top Red Hot Chilli Peppers tribute to perform at Emirates Dubai 7s
First look: Stunning beach bar February 30 Dubai opens at Palm West Beach
This magical botanical gin garden is back this winter
Huge DJ nights coming to Abu Dhabi soon
YOU SHOULD CHECK OUT
Our website uses cookies and other similar technologies to improve our site and your online experience. By continuing to use our website you consent to cookies being used. Read our privacy policy here.