The Address Downtown Dubai will not reopen this year

The Address Downtown Dubai will not reopen its doors this year according to a top Emaar official.

The Address Downtown, a luxury hotel and iconic Dubai building, was dramatically engulfed by fire on New Year’s Eve. And, while it will reopen, we now know it won’t be ready to open its doors again this year.

“It is too early to make an announcement on its actual opening date,” Chris Newman, the Emaar Hospitality Group’s Director of Operations told Reuters. “I can confirm The Address Downtown will not reopen in 2016.” 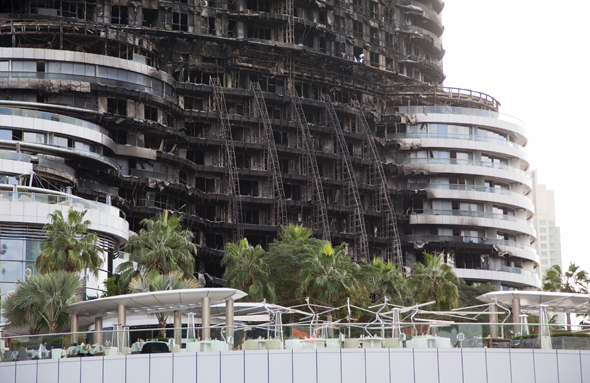 The hotel was home to top Dubai restaurants, including steakhouse Cut By Wolfgang Puck and bar-with-a-view Neos. These remain closed, however one restaurant in the bottom of the hotel – Em Sherif, has already reopened. Also, Katana, a new Japanese sushi bar, has just opened on the ground floor of the hotel.

*NOW READ: One man lost Dhs1.3 million worth of art in The Address fire*

Newman claims the fire that damaged the 63-storey hotel hasn’t had a negative impact on Emaar’s balance sheet.

The Address Downtown fire nearly gutted the luxury hotel, and broke out just hours before the New Year’s Eve fireworks. The Dubai Police have said it was caused by an electrical fault in a spotlight used to illuminate the hotel, and that it started at 9.25pm in between the 14th and 15th floor of the hotel.

Here’s a video that shows the police operations on the night of the fire: