Dubai’s a pretty impressive place to look at from the ground, let alone from space.

When viewed from far up above, the once giant Burj Khalifa goes from super-sized to souvenir-sized, and the rest of the buildings look like those little model mockups you’d find at Cityscape.

This new video, brought to us by Earth-imaging company UrtheCast, captures Downtown Dubai in real time, and in unbelievably clear focus considering how far away the shot was taken from.

The footage is captured using high definition cameras installed aboard the International Space Station (ISS). There are several commercial HD video cameras enclosed in a pressurised, temperature-controlled casing on the ISS.

In the video you can see how perfectly circular Sheikh Mohammed Bin Rashid Boulevard is, how mammoth Dubai Mall is (it’s to the right of the bright blue Dubai Fountain lake) and how much development there still is to do in the Business Bay area.

You can also see how close the Business Bay Dubai Canal extension is getting to Sheikh Zayed Road (which is the highway running horizontally along the top of the photo).

It doesn’t stop there though, UrtheCast have captured footage of places from all over the world, with another one of our favourite places in the region – the Pyramids at Giza – shown in this video:

*More: More epic photos of the UAE from space*

While not yet accessible, UrtheCast’s streaming service of the Earth is soon to go live for the public to view through their website (for a fee, of course).

The first attempt to install the UrtheCast cameras on the Russian Zvezda module of the ISS was made during a spacewalk in December 2013, and was the longest Russian spacewalk ever. However a problem occurred with the cameras, so the installation was not completed and the cameras were taken back inside. They were successfully installed in January 2014. 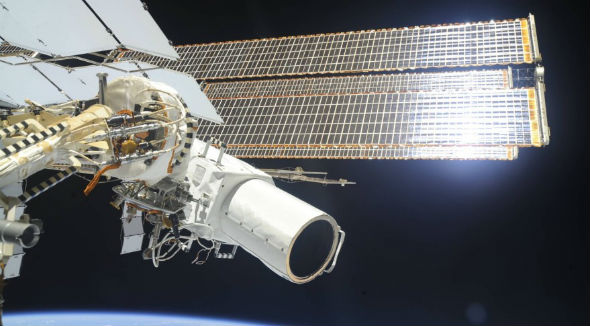 Urthecast have bigger ideas in mind, and are looking to move away from ISS-mounted cameras towards their own fleet of Earth-imaging satellites.

*More: 20 photos that show different sides of Dubai and the UAE*

“What about my privacy?” We hear you ask. Well, see what Urthecast have to say about how they believe satellite imagery of the Earth is a good thing with their video Perspectives.

Perspectives from UrtheCast on Vimeo.

Culture
News
EDITOR’S PICKS
UAE holiday dates announced for Eid Al Adha
READ MORE
Another update: Emirates extends suspension of flights from India to UAE
READ MORE
Coming soon: Everything we know about Ain Dubai so far
READ MORE
Khorfakkan set to open new tourist attraction 580 metres above sea level
READ MORE
MOST POPULAR
Review: Explore the Palm Jumeirah with a stay at St. Regis Dubai, The Palm
Etihad: India flights on hold until at least August 2
7 deals and experiences to know about during Dubai Summer Surprises
Enjoy water sports and DJs at this pet-friendly Mangrove Beach pop-up
Spice up your life with some of the best curry night deals in Dubai
YOU SHOULD CHECK OUT
Our website uses cookies and other similar technologies to improve our site and your online experience. By continuing to use our website you consent to cookies being used. Read our privacy policy here.