The roads around Business Bay are getting an overhaul

The roads around Business Bay will be transformed by 2018, with two new bridges and three underpasses to be built there soon.

Mattar Al Tayer, the Director-General of the Roads and Transport Authority, announced the new Dhs335 million project over the weekend:

This image shows where the new bridges will be built (the yellow is where a bridge will go). It looks like the construction will particularly ease traffic along Al Meydan Street (which connects Al Quoz, Sheikh Zayed Road and Al Khail Road). 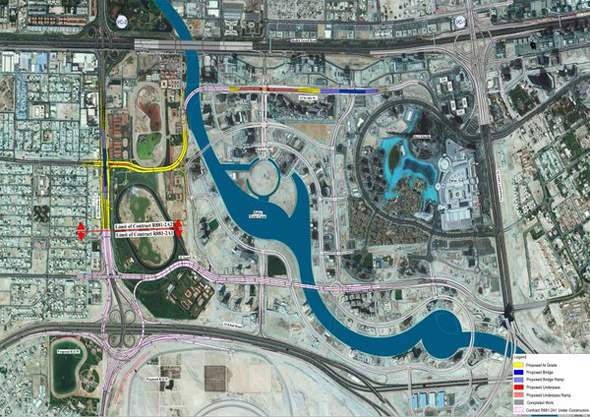 Another new addition will be a two-lane ramp serving traffic going from Al Khail Road towards Al Asayel Road in the direction of Oud Metha. The ramp will be likely to go somewhere near the red square in the Google Maps image below: 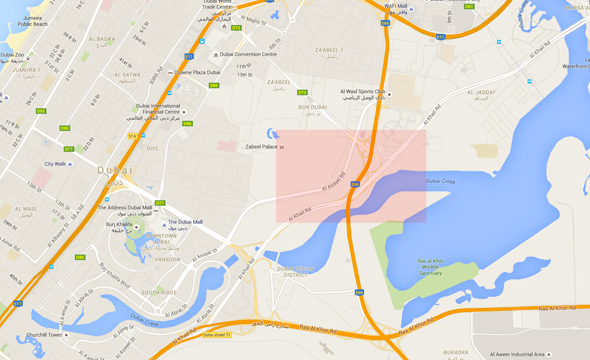 There will also be general works to expand roads and add service lanes along a four kilometre stretch.

Also, while talking about the Business Bay upgrades Al Tayer mentioned that the two bridge crossings over the Dubai Water Canal will be finished by August, meaning the Abu Dhabi-bound roadworks on SZR will no longer be an issue.

Here’s a video that shows a bit more of the Business Bay construction:

All of these developments are part of the Parallel Roads Project, which is going to see 108 km of road built from Sheikh Rashid Road to Abu Dhabi in order to ease traffic on Sheikh Zayed Road.

Some of the work already completed include Oud Metha Road extending 5km to connect with Business Bay and part of Al Meydan Road growing by 12km to join Hessa Road.

News
Transport
EDITOR’S PICKS
What’s On Nightlife Awards 2021: Here are the nominees...
READ MORE
It's back! What's On Lock In returns to Media One Hotel
READ MORE
Arts and culture: 5 spots we can't wait to visit at Expo 2020 Dubai
READ MORE
UAE petrol prices are set to decrease in September 2021
READ MORE
MOST POPULAR
CHICAGO, The Musical is coming to Dubai Opera in January 2022
Popular botanical bar Flair 5 reopens for the winter season
VidCon Abu Dhabi 2021 now confirmed, guests include Supercar Blondie
Watch: Expo 2020's official song has been released and it's seriously catchy
A Shakespeare rom-com is gracing the stage at The Junction this weekend
YOU SHOULD CHECK OUT
Our website uses cookies and other similar technologies to improve our site and your online experience. By continuing to use our website you consent to cookies being used. Read our privacy policy here.