Carl Cox and Adam Beyer are two techno lifers, but their stories have unfolded in very different ways. UK institution Cox has risen through the ranks from being voted as No.1 Rave DJ in 1992, to becoming a festival headlining act who has his own stages, his own long-running residency and fans on just about every continent. Beyer has remained very much more in the underground, with a vast discography that has provided DJs and dancers with club ready dynamite ever since 1992. 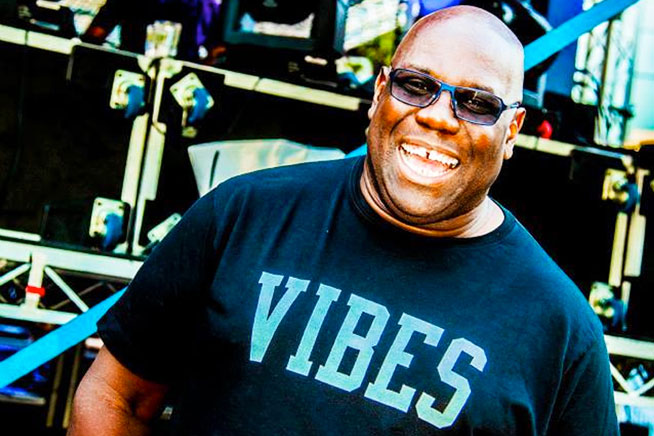 A couple of things have defined Cox, the ever smiling, ever bouncing, larger than life character with his trademark toothy smile. The first is his high-energy, quick and slick mixing style, no doubt a product of the hard and fast raves he played at legendary places such as Shelly’s, The Haçienda and Fantasia all around the UK in the ’80s. Nowadays, instead of breakbeats or trance, he tends to deal in high-energy techno and house, slamming together cuts from a wide field of reference, leaving his crowds never less than fully pumped. 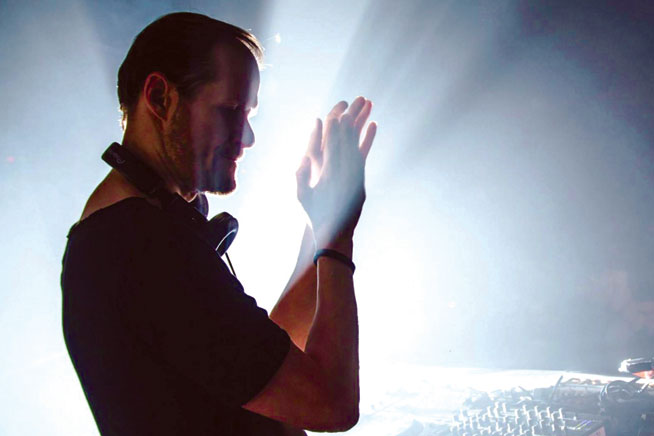 Beyer’s style is much more subtle and straightforward. He builds and builds his tightly programmed drum tracks (no doubt a result of being a drummer himself) into high pressure, rolling techno soundscapes that are deep, pummelling and uninterrupted. It leaves crowds hypnotised and entranced, marching as one to his beats. As such, his label, Drumcode, is perfectly named, and for 20 years now the Swede has relentlessly pursued this vision of functional, rhythmic techno and has shunned the many passing fads that have come and gone during the years. The music he makes, and that his label releases, is not ‘a bit housey’, ‘kinda minimal’ or in any way ‘dubsteppy’, it’s just techno. Pure and simple. And it always has been because for Beyer and Drumcode, consistency is key.

Cox, too, has been consistent, but in different ways. Whilst he has always played techno, he is also happy to reach for house, for electro, for the odd trance cut or more commercial sound: it’s what his ever larger crowds expect of one of dance music’s original superstars. His consistency comes from always delivering the goods no matter how big the audience. One place he has a done this for many years, of course, is Space Ibiza. His weekly Revolution parties there are one of the reasons many people flock to the island. With the sad closure of that club – and his residency – coming at the end of the 2016 summer season, Cox is in a reflective mood when Hype calls him up at home in Australia. 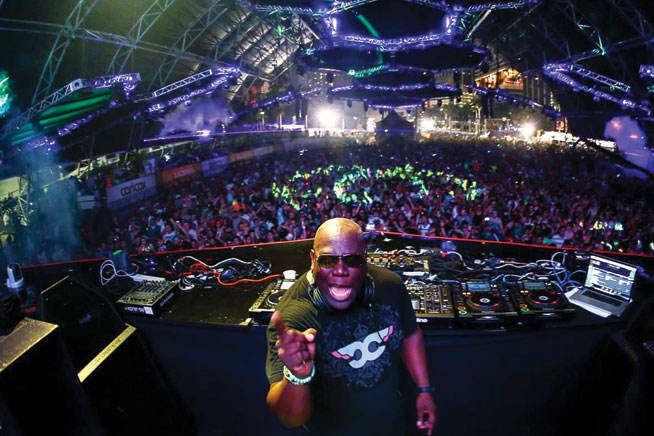 “It’s going to be a very sad season. Once we’re done, we’re done. You won’t be able to say, ‘I’ll come back next year,’ which is just sad. The thing is, I’m not done, and the people are not done, but the club will be. This season will be a celebration really. What’s so brilliant about the place is that it brings people from all over the world together based on the music we love. It’s open to anyone who wants to walk in and enjoy themselves. By that token, so many people make the pilgrimage to Space. It’s like a to-do list thing, like Burning Man, or jumping from a plane. Me being part of that – even back to the first time I went as a punter – it’s been amazing.”

Carl has also played other places on the island away from Space, from the IMS season opener at Dalt Vila to cult places like DC10, as well as at Music On with Marco Carola at Amnesia. So he promises he will be back in future. “Me not being on the island would be sacrilege,” he laughs. “The people who have been there over the last 20 years are what have made it great, so it’s up to whoever is there in the next 20 years to make it great as they see it.” 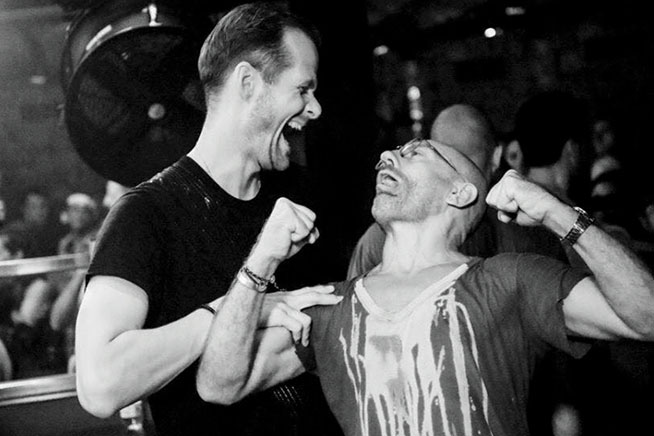 One of those people very much at the heart of the island’s key parties in 2016 will be Adam Beyer. He plays regularly for Sven Väth’s Cocoon at Amnesia, as well as for Maceo Plex at Pacha, and in fact, it was Ibiza that helped form in him an idea of the sound he wanted to pursue in his own studio, having grown tired of increasingly hard and fast techno tempos in his early days.

A trip to the island around a decade ago, when techno was just starting to get a foothold on the White Isle, saw him discover the evolutionary, stripped back sounds of new wave artists like Luciano and Ricardo Villalobos. “It made quite an impact on me,” he has said before. “I was happy, with friends and in the right setting. It reminded me of the early stuff we did in the ’90s – Rob Hood-style stuff. I felt it was happier, intelligent music that made me feel something.”

However, rather than simply ape what he was hearing, Beyer decided to rest, slow down releases on Drumcode and work on some other projects including a fabric mix CD and productions for imprints like Cocoon, happy to leave the harder stuff behind for a while. Eventually he focused back on the label, and opened it up to a wider family of producers from around the world. “All I am looking for in new music is something I could play in my DJ sets,” he’s said, matter-of-factly. “That’s it.”

Whilst Carl Cox has a sizeable discography, it is a sporadic one. He admits he only produces when he feels like it, or when a remix proposal really gets him excited (currently he’s working on projects involving Nile Rodgers, Pan-Pot and Jon Rundell amongst others.) Instead, he is primarily a DJ. “Every time I walk through the doors, with the club already packed and pumping, everyone is in such anticipation. The atmosphere is so thick, it just doesn’t get old even many years later: I still get the buzz I got going to an illegal party in a field in Oxfordshire somewhere.”

Since those illicit rave days, though, a lot has changed, and as such Carl has lots to say on how the art form has evolved in recent years with the rise of EDM and all the showiness that goes with it. Of course, given his background, he prefers one light or laser, a good sound system and little else. 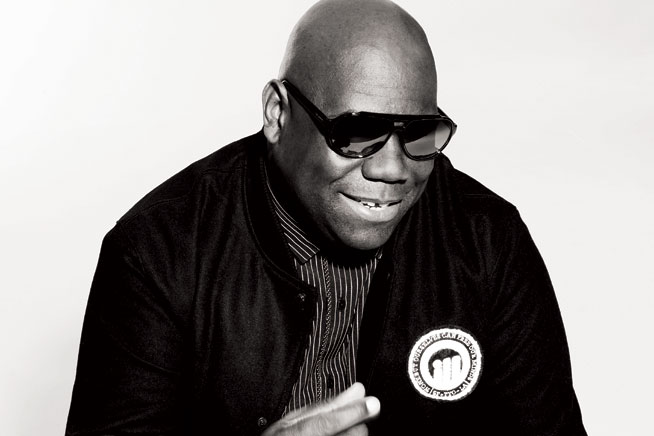 “The role of the DJ has change a lot,” he ponders. “Now DJs are seen to be jumping around, on the mic, performing more like at a concert than club. Sets are structured in the way the people think concerts should be, with confetti, pyrotechnics and so on. The crowd comes to see that – they buy the ticket because they want to see the DJ play their favourite songs. Creatively, we can’t find that DJ who plays ten hours, who takes you on a journey, cause they have to do big shows, shorter sets. It’s no one’s fault, it’s just how it’s gone, but you can’t call yourself a DJ if everything is programmed: you can call yourself a performing artist, but not a DJ.”

He continues, talking as fast as he DJs. “It means people who do that can’t play longer than 90 minutes, they don’t know what to play. They have to have all their drops and bangs right on cue, on time. I’ve never asked for CO2 or pyros or confetti, or for anyone to time sync my music to visuals: I think I get booked because I’m a DJ, people want to hear me DJ, they want to see what I can bring in the sense of a journey, what music I bring to the table.”

You’ll be able to find out for yourself when he comes to town on Friday to play at Blue Marlin UAE. It’s Carl’s first time playing for the Blue Marlin crew. Later that night, Adam plays the Groove On The Grass season finale, making it a double date to remember for Dubai’s techno fans. It may even be the last time we see Carl on these shores for he’s hinted that his passion for petrol-based pursuits – racing, bike riding, sidecar competitions – will likely replace his career as a DJ before too long. Ever humble, though, he saves his final words for Adam Beyer. “I know him very well and he’s rightfully become a very popular DJ. His career and mine have gone alongside. He has a massive fan base based on his brilliant output and his label. It’s a shame we couldn’t play the same party.”

Thoughts on the techno scene now and then 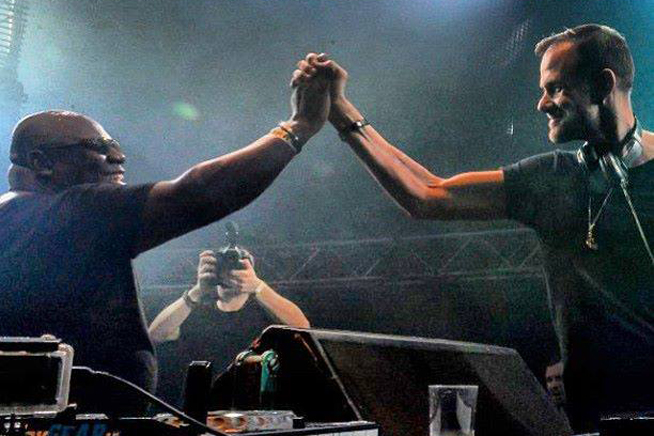 Adam: “The pros of the early days would be that you often found records or tracks that were completely new with sounds you had not heard before and they had the impact of really changing the way the scene was going. So the excitement of finding new music back then was bigger than it is now because there were new genres or styles of arrangement being born all the time. I also think the vibe you found in clubs in the ’90s was maybe more exciting than it is now. You only heard techno or even dance music in underground clubs, not on the radio or anything. I remember hearing a 909 in a TV commercial back then and everyone was freaking out because you did not hear those sounds anywhere other than in our music.”

All you need to know about Carl’s gig

All you need to know about Adam’s gig

What: Groove On The Grass Season 5 Closing
Where: Emirates Golf Club, Sheikh Zayed Road, Dubai
When: Friday, May 6, 5pm to 3am
Why: After Cox at Blue Marlin the night will still technically be young. So hotfoot it to GOTG where your techno session will continue with Adam Beyer
How: Metro to Nakheel
Cost: Dhs180 to Dhs240
Info: facebook.com/GrooveOnTheGrass
Heads up: DJ Tennis, Bart Skils and The/Das bring even more weight to the line-up

Carl: “When we started this whole kind of house music and techno music movement, which actually goes before the ’90s into the early and middle ’80s, it was only seen as a fad, something that would pass, like the punk or rock & roll of its time or early hip-hop of the time. All things, you know, go through their changes, but if you can imagine that I’ve been playing this type of music from 1987 until the present day, that’s over 25 years. So it’s amazing to see that people from the next generation and the next generation are able to carry this music movement on. For me to still be a part of that at this point is just truly amazing.”

Clubs
News
Nightlife
EDITOR’S PICKS
13 Sheikh Hamdan-approved restaurants in Dubai
READ MORE
Dubai brunches temporarily banned in new preventative measures
READ MORE
12 upcoming Dubai mega-projects we can't wait for
READ MORE
16 of the best beach bars in Dubai for sundowners
READ MORE
MOST POPULAR
Abu Dhabi restaurants where you can celebrate your love of Spritz
6 great beachside breakfast spots to try in Dubai this weekend
7 great deals to check out in Original Wings & Rings in March
Throwback: Check out these photos of the UAE's first hotel
5 empowering ways to celebrate International Women's Day in Dubai
YOU SHOULD CHECK OUT
Our website uses cookies and other similar technologies to improve our site and your online experience. By continuing to use our website you consent to cookies being used. Read our privacy policy here.