As of today, Dubai’s one-storey sprawling mall Ibn Battuta has 60 new shops. Oh, and it’s not stopping there, it’s going to get even more stuff next year…

A 300,000 square foot expansion of one of Dubai’s older malls, Ibn Battuta, has just opened. This has brought 60 new cafes, shops and services to the centre, and it means there are now almost 400 shops in the mall.

A rendering of the expansion plans.

The mall will soon also get a two-storey link that connects Ibn Battuta Metro Station to the shops (that’s due to open in a matter of weeks) as well as a 372-room Premier Inn.

Later this year, another 90 outlets, including a 24-hour foodcourt, will be opened.

*ALSO READ: An Italian-themed outlet mall is opening in Dubai this year*

But the development will continue into 2017… By the third quarter of next year we’ll see a multi-storey parking facility built, as well as a new cinema complex.

Then, the go-big-or-go-home plans come out with the construction of a 300,000 sq ft courtyard. The space will be filled with natural light in the summer months, but in the winter months will actually be open air, as it has a retractable glass roof. 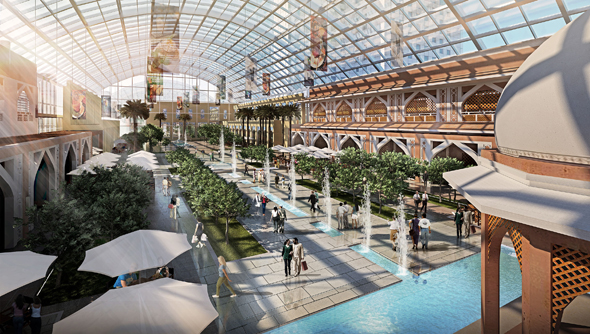 We’re getting plus-size Mercato vibes from the courtyard coming to Ibn Battuta in a few years (except this one has a retractable roof).

The courtyard will be the size of four football fields, and will be home to around 80 new shops and restaurants.

Things to do
EDITOR’S PICKS
So, when is the next UAE public holiday in 2021?
READ MORE
All of the lavish new hotels set to open in Dubai in 2021
READ MORE
16 of the best pool passes in Dubai that are fully redeemable
READ MORE
All of the restaurants at West Beach, Palm Jumeirah
READ MORE
MOST POPULAR
Abu Dhabi tourists can now get free vaccines through SEHA
Before and after: Stunning photos capture Dubai’s incredible transformation
Etihad wins Best Cabin Crew and Frequent Flyer Programme awards
Flash sale: This Dubai hotel has 40 per cent off and free attraction tickets
The best deals we've found in Amazon's Prime Day sale
YOU SHOULD CHECK OUT
Our website uses cookies and other similar technologies to improve our site and your online experience. By continuing to use our website you consent to cookies being used. Read our privacy policy here.