In just over a month Sheikh Zayed Road will look completely different (again) due to ongoing Dubai Canal works.

Many of you who commute along Sheikh Zayed Road toward Jebel Ali every morning will have noticed a new new eight-lane bridge near Business Bay emerging. This new bridge completely changes the landscape of SZR and will take southbound traffic over the Dubai Canal once the water’s complete (the northbound bridge opened in January).

You’ve probably also felt the frustration of the current traffic due to the narrowing of the existing Sheikh Zayed Road. Well the great news is that the new bridge will be finished in July. That’s right, when driving from Sharjah to Jebel Ali you’ll soon drive across a brand new bridge along Sheikh Zayed Road. This should ease morning traffic from Trade Centre to Business Bay too.

*ALSO: The roads around Business Bay are getting an overhaul*

The Roads & Transport Authority have announced that the eight-lane bridge will open in July (which is phenomenal considering diversions were only put in place for its construction in January).

This means that in just over a month, 16-lanes of new road will be operational along 800 metres of SZR (the eight lane northbound bridge opened in January) and that phase one of the Dubai Water Canal construction will be complete. 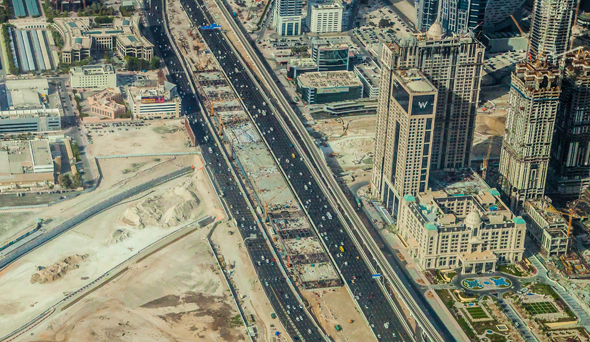 Here’s what the construction of the bridge looked like from the sky earlier this month.

The canal stretches 3.2 km from the Business Bay Canal up to the Arabian Gulf via Sheikh Zayed Road, Al Wasl Road and Jumeirah Road.

– The second phase, is the Dhs384 million construction (underway already) of bridges on Al Wasl Road and Jumeirah Beach Road that will allow yachts of up to 8.5 metres in height to navigate the canal along these roads. One of these bridges is already open, and the others are under construction. The RTA says the phase is overall 86 per cent complete. The construction also includes a multi-tier interchange to link traffic movement between Al Wasl, Al Hadiqa and Al Athar Roads.

– The third phase is the largest – at Dhs802 million – and involves the digging of the Water Canal, and building the sides of the Canal that will link Dubai Creek with the Arabian Gulf from Sheikh Zayed Road, through Al Safa Park and Jumeirah 1. This phase also includes the construction of three pedestrian bridges, 10 marine transit stations, and a manmade peninsula along Jumeirah Park. The RTA has just announced that this phase is 75 per cent complete. The marine transit stations will come particularly in handy when the islands under construction at The World and near Jumeirah 2 are completed.

– The fourth phase will see roads and utility lanes built on either side of the 3.2 km long canal to access property developments. This will cost Dhs307 million. 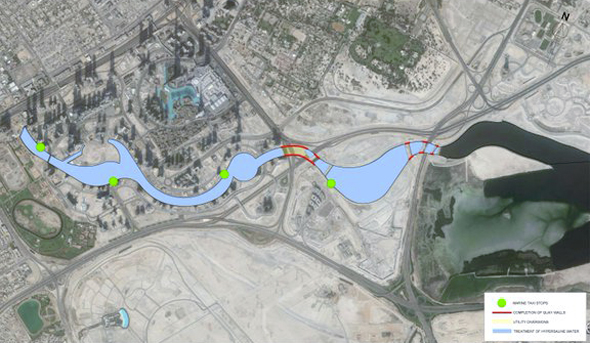 An RTA image that shows the area of the full 3.2 km canal extension

– Then, the fifth phase will, crucially, link the Business Bay Canal with the Dubai Water Canal, and mean the water will lead out all the way to the Arabian Gulf from Ras Al Khor. This phase will cost Dhs396 million.

Here are some renderings of what the Dubai Canal will look like when finished:

News
Transport
EDITOR’S PICKS
UAE holiday dates announced for Eid Al Adha
READ MORE
Update: Emirates again extends suspension of flights from India to UAE
READ MORE
Coming soon: Everything we know about Ain Dubai so far
READ MORE
Khorfakkan set to open new tourist attraction 580 metres above sea level
READ MORE
MOST POPULAR
Sign your kids up for a five-day theatre camp at The Junction this summer
Pics of the week: Your best photos of the UAE
New films to watch in cinemas this week: July 22 to 28
Caesars Palace Dubai transforms into a summer playground this Eid
10 things to do in Dubai that are free (or cost next to nothing)
YOU SHOULD CHECK OUT
Our website uses cookies and other similar technologies to improve our site and your online experience. By continuing to use our website you consent to cookies being used. Read our privacy policy here.