Inside Etihad Airways' Dhs117,000 a ticket 'The Residence'

Always in the air, yet always fly coach?

Well, you can kind of experience what it’s like to get an upgrade (or three) with Etihad Airways’ latest ad campaign for their business suites and beyond on board the Airbus A380.

In a word? Unreal. The video takes you on a 360º virtual reality tour throughout the various cabins of the A380, from coach, to business, to first class and The Residence, with none other than triple-Oscar nominee Nicole Kidman as your tour guide.

But want to actually fly in The Residence? It’ll cost you Dhs117,000 (we’ll just stick to VR thanks).

Here’s the video. Use your mouse to look around, or even cooler – use Google Cardboard or a similar virtual reality device if you have one.

The video kicks off with Kidman rattling off some riddle-like sentences as if straight out of an Agatha Christie novel. Why? Who knows. But hey, that lounge area’s pretty sweet.

We’re then transported to the coach cabin, which, although nowhere near on par with what we’re about to be shown, still looks pretty comfy.

*MORE: Drone halts air traffic at Dubai International for over an hour*

After flying through the business class cabin and experiencing what it’s like to sit in one of the seats, we’re taken back into the lobby lounge, where a young English couple chat over coffee while on the left an Emirati falconer has his portrait sketched by a man on an iPad. As you do.

We couldn’t help but notice the cringe-worthy conversation between the couple though, with the man saying to his partner, “Look at you! Not just a pretty face after all.” For her to respond, “What? You’re unbelievable, who do you think you are?” “You know who I am.”

Anyway. We’re then walked through the first class cabin and… Wait, who’s that in seat 2H? It’s the falconer guy again! He and his falcon are kicking back with some tea and a spot of football on the telly. We wonder who the falcon’s favourite player is. Falcao perhaps? Ronnie Bird?

Now we’re shown Etihad’s crown jewel, where Kidman seems to have been put up – The Residence. A mini apartment of sorts kitted out with a living room, bedroom and an en suite bathroom (with walk-in shower). 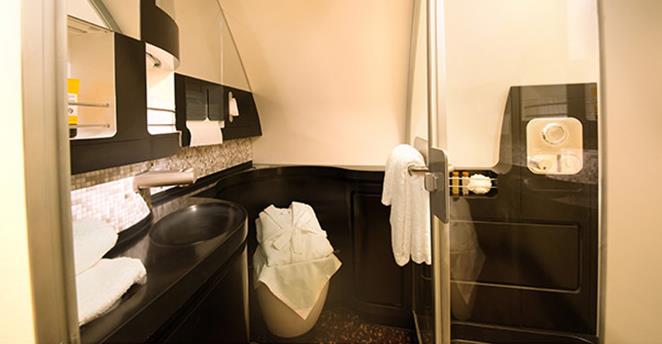 Unfortunately, unless you’re on the same yearly salary as Nicole Kidman, the price for a one-way ticket may be somewhat of a stretch at Dhs117,540.

There’s no denying that the video in all its 360º glory is a pretty sweet advert though. If you’re curious as to how they made it, you can find out here:

News
Transport
Travel
EDITOR’S PICKS
13 Sheikh Hamdan-approved restaurants in Dubai
READ MORE
Dubai brunches temporarily banned in new preventative measures
READ MORE
12 upcoming Dubai mega-projects we can't wait for
READ MORE
16 of the best beach bars in Dubai for sundowners
READ MORE
MOST POPULAR
Abu Dhabi restaurants where you can celebrate your love of Spritz
6 great beachside breakfast spots to try in Dubai this weekend
7 great deals to check out in Original Wings & Rings in March
Throwback: Check out these photos of the UAE's first hotel
5 empowering ways to celebrate International Women's Day in Dubai
YOU SHOULD CHECK OUT
Our website uses cookies and other similar technologies to improve our site and your online experience. By continuing to use our website you consent to cookies being used. Read our privacy policy here.