A new restaurant in Manzil Downtown serving Jamaican food with a side order of smiles.

Time for a Jamaican patois lesson. Repeat after us: Ting Irie. Well done. You just said “everything is all right” in Jamaican. After waiting a year for this restaurant to open, we hoped that the homegrown Carribean concept would be better than just all right. 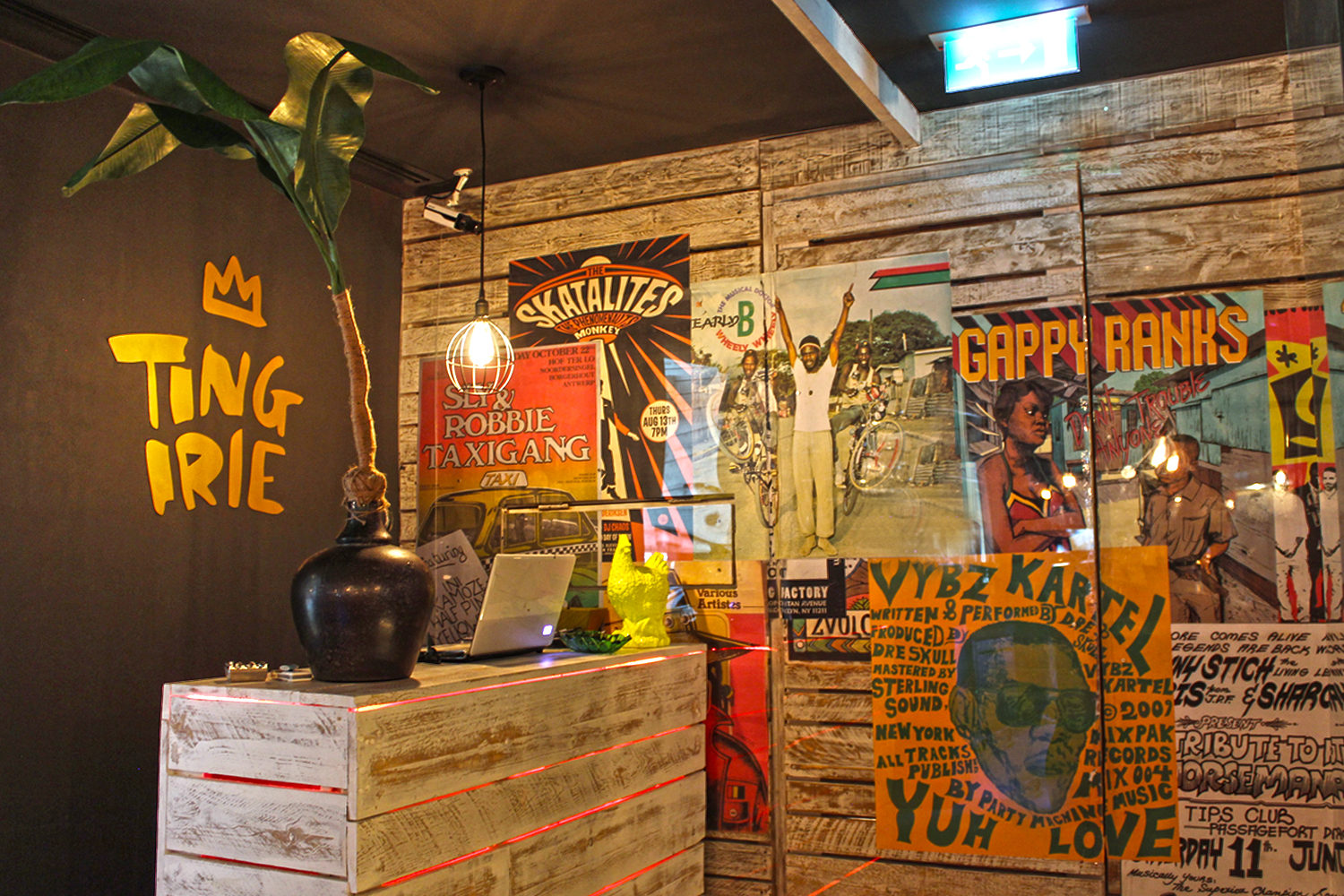 Airy and alive with primary colours, the low-slung, psychedelic ceiling creates a cool hole-in-the-wall feel where tables are dressed with miniature pineapples. Poster paintings of Jamaican music scenes adorn the walls, cheerful reggae music plays at a soothing volume, and any sluggish appetites are revived by the smell of spices wafting around the dining room. 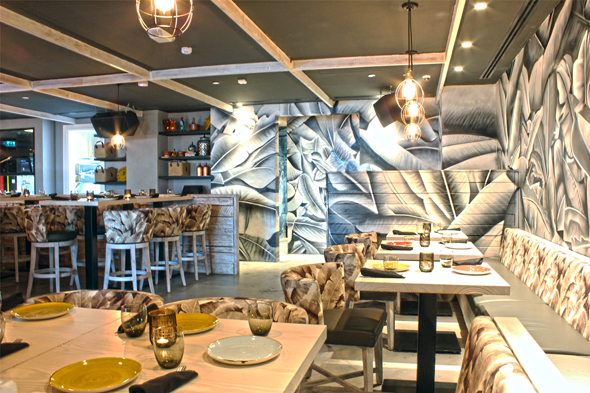 “You’ll be licking your fingers from start to finish,” said our waiter, who six months ago was playing football in his hometown in Jamaica. The staff here is magnificent. They have flown in from Jamrock (that’s patois for Jamaica), bringing bags of personality and unmatchable energy. You can’t help but love the atmosphere.

So can the food match up? At the helm is chef Craig Wong who incorporates his Jamaican-Chinese heritage to smart effect. The oxtail cocobread sandwich (Dhs65) is served as three folded-over buns stuffed with tender pulled oxtail and homemade coleslaw. It’s a mix of sweet meat and creamy slaw that’s a party parade of flavours. 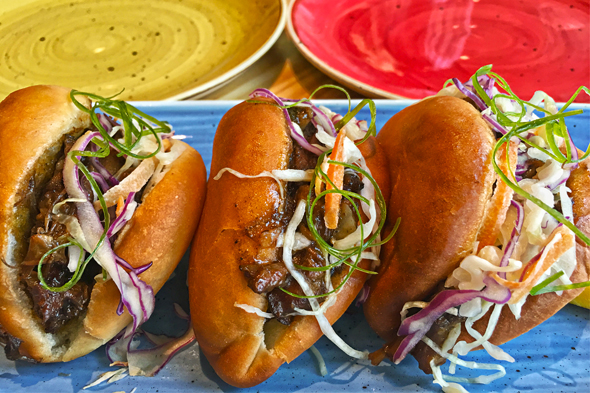 Meanwhile, we’re pretty sure the chips Oman burger (Dhs55) isn’t a staple in downtown Kingston but it’s a fun Middle Eastern-Jamaican hybrid. A griddle-smashed patty is layered with white pimento cheese and crushed crisps to make the ultimate nostalgic sandwich, while a sugary layer on the bun gives it the Jamaican twist.

There are plenty of salad options including the mista crunch (Dhs50), a mix of cabbage, shredded romaine lettuce and a spicy plum dressing topped with crispy noodles. While the dish looks exciting, the taste is underwhelming: the sweet sauce is overpowering and the crispy noodles taste synthetic. Head for the heartier big tings instead, like the original gangsta fried chicken (Dhs105 for half; Dhs195 for a full bird). The pieces are big and the breaded coating is salty and crispy. Dip each piece into the fiery chilli sauce or honey butter and you’ve got yourself a naughty but tasty dish. 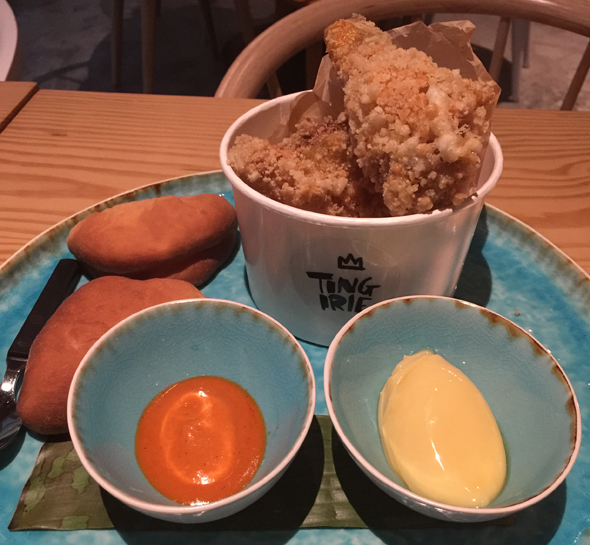 Many of the Caribbean ingredients and spices are imported straight from Jamaica including the Scotch Bonnet peppers and pimento seeds, which can really be tasted in Ting Irie’s signature dish, the jerk chicken (Dhs105 for half; Dhs195 for a full bird). Diners are advised to tuck in with their hands, peeling away at the jerk marinade, which is more spicy than it is sweet, revealing tender hunks of delicious meat. 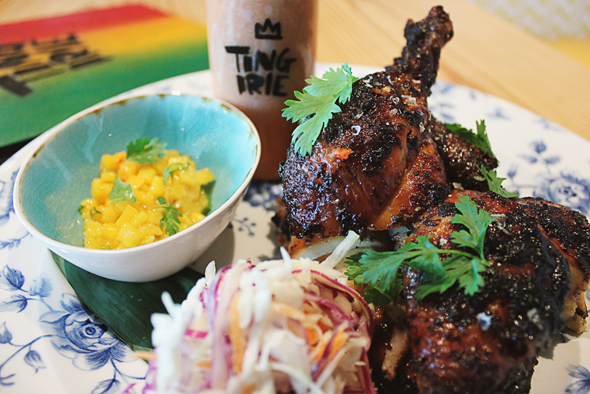 The carnival funnel cake (Dhs75) is the thing you’ll be talking about on the way home though. A messy doughnut base with a strawberry compote, topped with a dollop of vanilla soft serve ice cream tasted like the dream dinner for a ten year old. 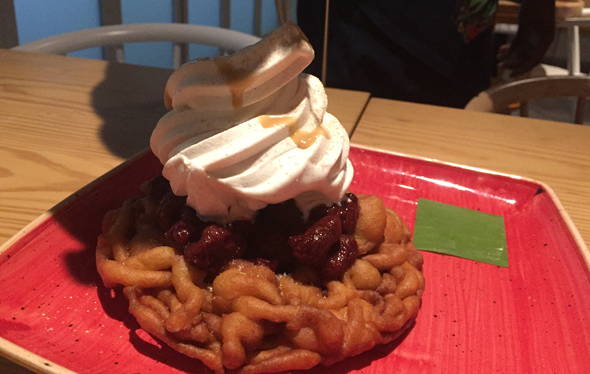 We realised our bredrin (friend) earlier was wrong. It wasn’t just our fingers we’d be licking – it was the plates too.

Eat & Drink
Restaurants
EDITOR’S PICKS
13 Sheikh Hamdan-approved restaurants in Dubai
READ MORE
Dubai brunches temporarily banned in new preventative measures
READ MORE
12 upcoming Dubai mega-projects we can't wait for
READ MORE
16 of the best beach bars in Dubai for sundowners
READ MORE
MOST POPULAR
Breaking: Dubai extends preventative measures until mid-April 2021
Enjoy brunch, breakfast and a stay at Westin Abu Dhabi from Dhs432
Get a free gym class at this cool new Dubai gym
Pics of the week: Your best photos of the UAE
Emirates Airlines and DHA to implement digital verification of traveller medical records
YOU SHOULD CHECK OUT
Our website uses cookies and other similar technologies to improve our site and your online experience. By continuing to use our website you consent to cookies being used. Read our privacy policy here.