This injured Abu Dhabi cyclist needs your help. Here’s why

Abu Dhabi’s cycling community are taking to the roads this Friday to show support to a fellow rider who was seriously injured during a race last February.

David Derrick, known locally as Del, was participating in the Yas Island Cycle Race on February 19 when he fell from his bike. Del was travelling at around 55kph at the time of his crash and suffered a fractured skull, a punctured lung, a broken collarbone, broken ribs and flesh injuries. The severity of his injuries meant he was placed in a medically induced coma and had to have his skull temporarily removed to relieve pressure to his brain.

Incredibly, after spending two weeks in a coma and a total of four weeks in an ICU unit, Derrick has began his rehabilitation process but his recovery has reached a crossroads – he needs neurocognitive therapy to help rebuild the nerves in his brain that were damaged. The British expat has had to relearn tasks we take for granted, such as walking, talking, eating and shaving.

The treatment he needs isn’t available in the UAE and because he’s lived outside of the UK for three years, he can’t receive help for free on the NHS as soon as he returns home.

As a result, his wife Joanna and family are raising funds on gofundme.com to raise the £55,000 (around Dhs300,000) required for him to receive private treatment in the UK. 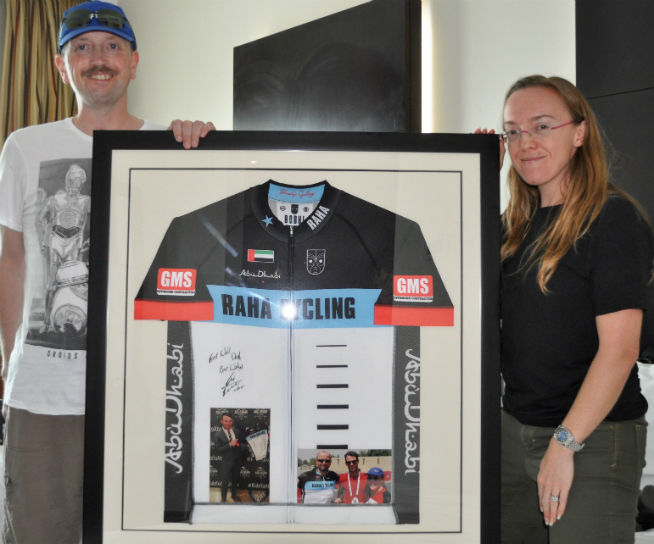 “He’s still very much in recovery,” says his wife Jo. “He’s got problems with memory, concentration, language – all these things are there, but they have to be reawakened. When there’s been bruising to the brain and the nerves have been frayed, messages can’t get from A to B through their normal route – so you have to get the nerves to rewire or reboot them. It’s a possible process but it’s like rewiring a main circuit board. There’s a lot of work involved.”

The good news is Derrick’s recovery is going better than expected. “He can walk and his speech is improving,” says Jo. “But it’s like after having a stroke. The symptoms are similar. He can do a lot of things for himself now, like dressing, showering and having a shave. As his brain recovers, so will his awareness of his situation. He knows he’s been injured. His forecast for recovery is good, but we won’t know for sure until he’s about six weeks until a proper therapy programme.”

Jo adds that she and Derrick’s family have been amazed by the generosity of people who have donated so far. “We’ve been stunned. Even complete strangers have sent us messages of support and contributed.”

This weekend, Abu Dhabi’s cycling groups Raha Cycling and GMS – Yas Cycles, are joining forces to cycle 100km together on a ride called Ride For Del Derrick and are asking all cyclists to make contributions to Derrick’s fund during the event.

“Del was a Raha rider and used to ride with the group. He would often come up from Al Ain and rode with us when he could,” says Raha Cycling’s John Millington. “He and Jo would also help with our Very Steady group on a Saturday, which is in essence a development ride to help people get into cycling in groups. It’s not so much a charity ride this Friday, but we will be collecting from the members of the group. Raha Cycling will also be donating some money from our own fund.”

Visit GoFundMe.com/GetwellDel to donate and visit facebook.com/raharevolution for details on the ride, which starts at 5.30am on Friday July 1

News
Sport & Fitness
EDITOR’S PICKS
9 royal-approved Dubai restaurants
READ MORE
12 incredible rooftop pools in Dubai to check out
READ MORE
16 of the best beach bars in Dubai for sundowners
READ MORE
Covid-19 rules in Dubai: all the updates you need to be aware of
READ MORE
MOST POPULAR
You can now do watersports at Cove Beach Abu Dhabi
Watch: This is what it will be like to ride the Virgin Hyperloop
Five of the coolest places to go glamping in the UAE this weekend
These are the most lavish Valentine's Day packages in Dubai
What we know about the Zayed National Museum coming to Abu Dhabi
YOU SHOULD CHECK OUT
Our website uses cookies and other similar technologies to improve our site and your online experience. By continuing to use our website you consent to cookies being used. Read our privacy policy here.