Where to ride a jet ski in Dubai

Got the need for speed? Here’s where you can get in on some jetski action in Dubai.

A few years ago the maritime authorities clamped down completely on the use of jetskis in Dubai and it was almost impossible to rent a water scooter in the UAE. Thrill-seekers had to travel as far as Ghantoot to get in on the action. In the last few months, however, restrictions have eased and now they can be used across the coastline provided that unlicensed riders join a tour. This has sparked a number of watersports companies offering specialised excursions where a squadron of jetskis whizz across the water to see some of the city’s most iconic landmarks. 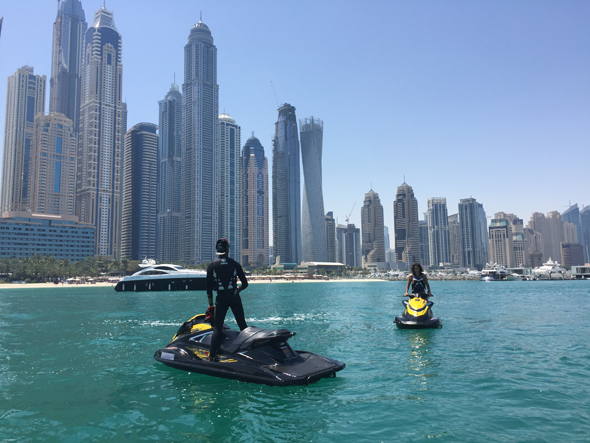 “These are the fastest jetskis in Dubai,” says Ayman, our tour guide, and natural born speed fiend. Nervously, we donned our lifejackets, hopped on our water steeds and learned the basics in jetski driving. It’s pretty simple really: press the start button to switch on the engine; squeeze the right lever to accelerate; squeeze the left lever to reverse.

Once you’re out of the small harbour, the entire sea is fair game. Our guide pointed towards a boat in the distance, and zoomed off at a breakneck speed towards it, leaving us in his white wash. The 1,800cc Yamaha jetskis are no joke and can reach speeds of up to 100kmph, but even reaching 50kmph feels like we’re flying. Calm waters allow for smooth rides but as we headed further away from the coast, the sea became more choppy and we found ourselves flying off the seat as we smashed up and over the waves. It’s hair-raising but utterly addictive. For 90 minutes, we zipped across the coastline passing Burj Al Arab, Barasti and JBR before heading out to sea and all the way around the Palm Jumeirah – while Ayman captured photos of our journey, pausing in front of Atlantis The Palm and Burj Al Arab for the obligatory landmark snap. 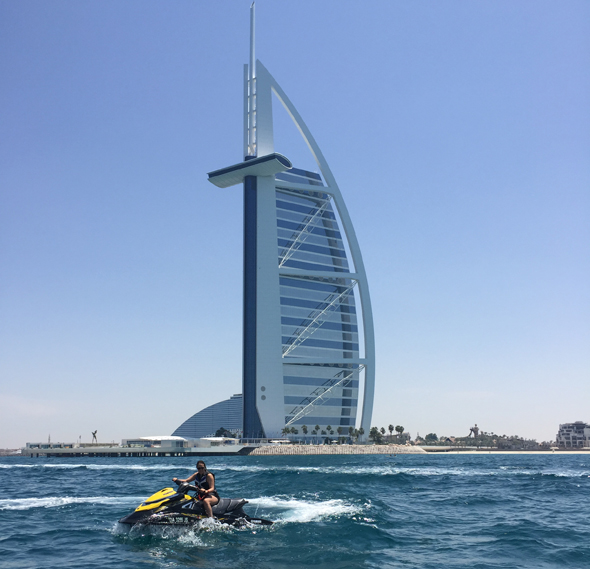 For thrill-seeking visitors to Dubai who’d rather be thrown under a sightseeing bus than ride on one, this is the ultimate way to see the city’s coastal sights. For residents, it’s just one more refreshing watersport to add to your summer bucket list.

Burj Al Arab, Palm Jumeirah and Mina Seyahi tours are all on offer with Ride In Dubai. On Wednesday it’s jetski happy hour from 10am to 2pm where you can rent one jetski and get a second free. Every Tuesday it’s ladies’ day where women receive a 50 per cent discount.

SAFETY FIRST
While jetskiing is now readily available in Dubai, bear in mind that they can be dangerous to others as well as yourself:

Outdoor
Sport & Fitness
EDITOR’S PICKS
Here's the full list of UAE public holidays in 2023
READ MORE
23 incredible things to look forward to in the UAE in 2023
READ MORE
Hidden gems: 10 UAE desert pop-ups to discover this winter
READ MORE
Where to travel in 2023: 10 new flight routes from the UAE
READ MORE
MOST POPULAR
6 brilliant things to do in Abu Dhabi this week: Feb 6 to 9
Dubai tourism increases by a massive 97 per cent
16 incredible mega projects coming to Abu Dhabi soon
The epic Asian Le Mans Series returns to Dubai Autodrome this month
Snapped: Celebrities spotted in the UAE this week
YOU SHOULD CHECK OUT
Our website uses cookies and other similar technologies to improve our site and your online experience. By continuing to use our website you consent to cookies being used. Read our privacy policy here.