Dubai area guide: Five things to do in Burj Plaza

An open plan terrace with restaurants, cafés, gaming centres, and a world first in the shadow of Burj Khalifa.

Why Grow Up When You Can Slide Down? The first-of-its-kind Downtown Slide is now open https://t.co/MWFd30nnI1 pic.twitter.com/sjAGeX4MTa

We’ve got dozens of slides in Dubai, but all of them are at waterparks. All except for the Downtown Slide, that is. Opening at the beginning of Ramadan, the 19-metre-long tube is located just at the corner of Burj Plaza. But if you’re worried about going down a giant metal tube during a Dubai summer day, don’t be. This state-of-the-art installation is the first insulated stainless steel outdoor dry slide in the world, which means it’s always kept cool, even in extreme temperatures. Phew.
Burj Plaza, Sheikh Mohammed Bin Rashid Boulevard, Downtown Dubai, Dubai, daily 4pm to 1am, free. Metro: Burj Khalifa/Dubai Mall. emaar.com 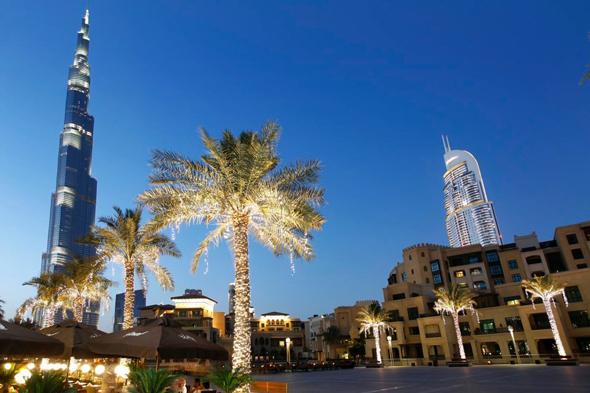 A firm favourite with long-time Dubai residents and locals, the French-inspired Gérard Café has been serving coffee with a smile since 1981. Mornings are best here, when tourists and Downtown residents swoop in for the coffee and three pastries deal for Dhs25. In cooler temperatures, the alfresco seating isn’t half bad either.
Burj Plaza, Sheikh Mohammed Bin Rashid Boulevard, Downtown Dubai, Dubai, daily 6.30am to 12.30am. Tel: (04) 4548354. Metro: Burj Khalifa/Dubai Mall. gerardcafe.com

4. Yeldizlar
Yeldizlar might mean ‘star’ in Turkish, but don’t expect the same cuisine here. This is actually a Lebanese restaurant. Well, it’s a Lebanese restaurant that also serves pasta and other European dishes. In fact, if you were looking for a Jack-of-all-trades restaurant, Yeldizlar is it. However, its most popular feature is the shisha served every day from 10am to the early hours.
Burj Plaza, Sheikh Mohammed Bin Rashid Boulevard, Downtown Dubai, Dubai, daily 10am to 2am. Tel: (04) 4470670. Metro: Burj Khalifa/Dubai Mall. yeldizlar.com

5. Lake ride
The docking point for the scenic Dubai Fountain Lake Ride is situated at the top of Burj Plaza. Hop aboard at night to catch the dancing fountain in all its glory. Just be prepared to get wet.
Burj Plaza, Sheikh Mohammed Bin Rashid Boulevard, Downtown Dubai, Dubai, daily 5.45pm to 11.30pm, Dhs65. Metro: Burj Khalifa/Dubai Mall. burjkhalifa.ae

Eat & Drink
Restaurants
Things to do
EDITOR’S PICKS
What’s On Nightlife Awards 2021: Here are the nominees...
READ MORE
It's back! What's On Lock In returns to Media One Hotel
READ MORE
Arts and culture: 5 spots we can't wait to visit at Expo 2020 Dubai
READ MORE
UAE petrol prices are set to decrease in September 2021
READ MORE
MOST POPULAR
This new family-friendly brunch includes free cinema tickets
Pics of the week: Your best photos of the UAE
How to use Playkey.me, the region's first supercharged cloud gaming service
The Mai Dubai half marathon is back in October
Exhibitions, workshops and more to experience at Sharjah Art Foundation
YOU SHOULD CHECK OUT
Our website uses cookies and other similar technologies to improve our site and your online experience. By continuing to use our website you consent to cookies being used. Read our privacy policy here.