Man flies 5,600km to secretly propose in the Dubai desert

It’s almost impossible to measure love – however for one man, it’s about 5,600 kilometres.

Ben Moss, from Solihull in England’s West Midlands, secretly flew between continents to pop the question to his unsuspecting girlfriend amid the sandy climes of Dubai’s desert.

His girlfriend, Abbie Parker, was in the UAE visiting a friend, and Moss was forced to hole up in a hotel for three days while he waited for the perfect proposal moment.

It came as Parker was on a safari with two pals on June 4, with Moss suddenly appearing amid the sand dunes and getting down on one knee. 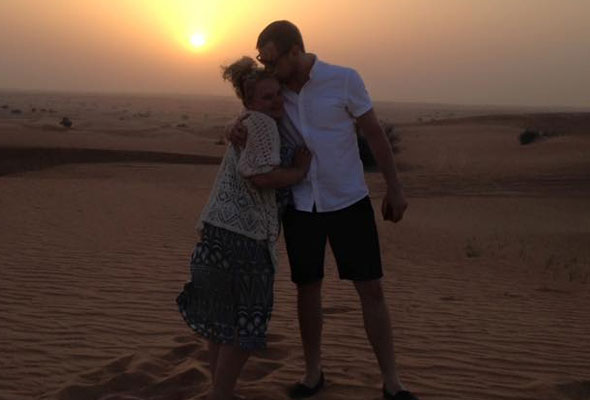 “Abbie’s face was quite a picture. She looked shocked and then broke down in tears. She just couldn’t believe it,” he told the Daily Mail.

“I go over the top with a lot of things, so it wouldn’t have been right to just book a table somewhere.”

MORE: The ‘I do’ with a view! Burj Al Arab to host weddings on its helipad

Moss roped in Parker’s friends to help him keep up the ruse, and even took pictures of their kitten before he left, to send to his girlfriend and make her think he was at home.

The couple, both 24, are now planning their wedding.

“Looking back I think he was trying to put me off, and I just thought I was on a girlie holiday,” said Parker. “It was just lovely.”

News
Travel
EDITOR’S PICKS
UAE holiday dates announced for Eid Al Adha
READ MORE
Emirates extends suspension of flights from India to UAE again
READ MORE
Coming soon: Everything we know about Ain Dubai so far
READ MORE
Khorfakkan set to open new tourist attraction 580 metres above sea level
READ MORE
MOST POPULAR
It's Dhs350 to brunch, stay and play at the What's On Lock In this weekend
UAE weather: Temps of over 50ºC recorded in the shade yesterday
Get a free Expo 2020 day pass when you fly with Emirates
A popular fairy-tale is gracing the stage at The Theatre at Mall of the Emirates in August
UAE petrol prices will increase again in August 2021
Exclusive interview: John Cena on his role as a 'douchey Captain America'
YOU SHOULD CHECK OUT
Our website uses cookies and other similar technologies to improve our site and your online experience. By continuing to use our website you consent to cookies being used. Read our privacy policy here.