Nanhaku Yadav is from Ghazipur in Uttar Pradesh, and he’s been working in Dubai for four years.

He keeps just Dhs500 for his expenses in Dubai, with only Dhs50 for his “pocket money” – the rest goes to supporting his three kids, wife and family back home.

Watch the moment he found out he had won big here:

What will Yadav do with the money? “I will begin my new life,” he said.

His dream is to own a business in his hometown, near his family. He’s currently a tiling and marble specialist here in Dubai.

According to the Khaleej Times Yadav will quit his job, work out his notice and then return to his hometown in September.

He’ll send almost all of the money straight home, although he will save some to buy gifts for his wife, his daughters (12 and 5) and his son (4).

He’ll use the rest of the money to set up a general store in Ghazipur.

Yadav came to Dubai in July 2012 and has been working here since – “I want to convey this message to people around me,” he said. “They can change their destiny but they need to believe in themselves”. 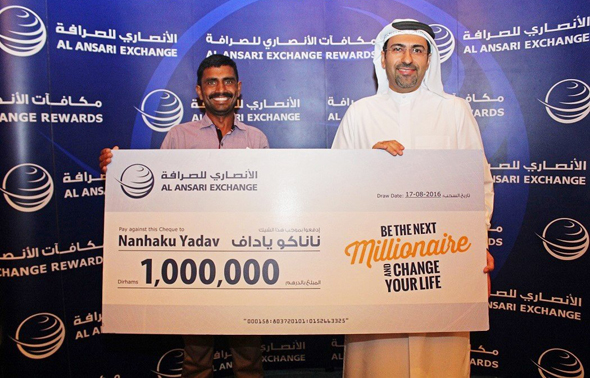