Maradona’s opened a restaurant in the capital. But is it a winner?

Like football? You’ll love Café Diego. This new Nation Galleria outlet is part-owned by Diego Maradona, the former star of Argentina, Boca Juniors, Napoli and Barcelona, and the restaurant is a celebration of his career – highlights of him scoring goals play on several widescreen TVs. Some of the walls are blue and yellow (the colours of Boca Juniors), while some chairs are red and blue, the colours of Barca.

But it’s also kitted out to look like a street in Argentina. Giant graffiti murals line the walls and reclaimed wood is everywhere, giving you a feeling of being outdoors, as opposed to inside a mall in the desert.

The menu features dishes from Maradona’s home country, plus Italian and Spanish fare, but this is where things get a little puzzling. You’d be forgiven for thinking this is a burgers and pizzas joint, but the food – in terms of presentation, taste and ambition – would put some of the city’s
fine-dining establishments to shame. 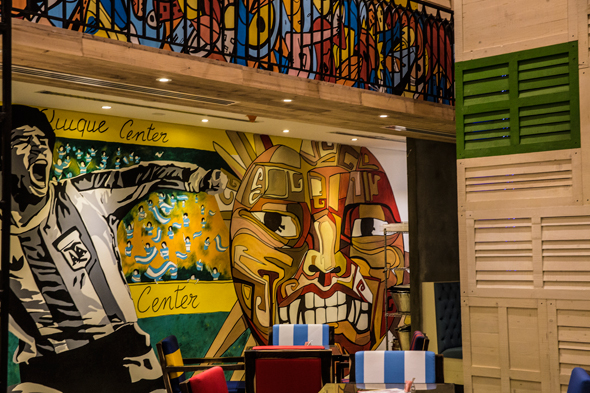 To start, try the smoked salmon with avo mousse. Beautifully presented, it looked like an ice lolly complete with a stick, but was made of a salmon and mascarpone mousse wrapped in smoked salmon and served with orange caviar and avocado mousse. Salmon featured again in another starter, this time deep fried in chia seeds. It was surprisingly light and the chia made for an unusual yet satisfying coating with plenty of crunch.

The mains also excelled. The smoked sea bass was fluffy and simply seasoned with salt, pepper, thyme and butter, and roasted over apple wood chips. All the steaks here are imported from Argentina so make sure you try the 200g roasted tenderloin. The meat tasted smoky, but in a good way, and was served on a subtle bed of potato cream with truffle oil and caramelised shallots.

Desserts will also have you running out of superlatives. The cleverly designed chocolate brownie looks like a football pitch corner flag and is a cascade of colours and flavours, including crushed chocolate biscuits, a layer of nuts and another of ganache. On the side you’ll find yoghurt caviar, meringue in the colours of the Boca team kit and vanilla ice cream. It’s a clever dish that could feed four. Also, try the dense Argentinian pancakes sprayed with sweetened condensed milk and caramel sauce with coconut foam. The texture was unusually spongy but, again, the flavours made it a hit.

What’s On takes pride in not going OTT about a new place, but it’s hard not to rave about Café Diego. We’ll be back, and soon.

Eat & Drink
News
Things to do
EDITOR’S PICKS
13 Sheikh Hamdan-approved restaurants in Dubai
READ MORE
Dubai brunches temporarily banned in new preventative measures
READ MORE
12 upcoming Dubai mega-projects we can't wait for
READ MORE
16 of the best beach bars in Dubai for sundowners
READ MORE
MOST POPULAR
Tried and tested: The brand new slides at Atlantis Aquaventure waterpark
You can now bring your pet along to this luxury Abu Dhabi hotel
Bla Bla Dubai launches romantic date night cabana offer
These Dubai roads will be temporarily closed on Friday, February 26
Have unused beauty products lying around? Donate them to this wonderful initiative
YOU SHOULD CHECK OUT
Our website uses cookies and other similar technologies to improve our site and your online experience. By continuing to use our website you consent to cookies being used. Read our privacy policy here.