Weekend away: A jolly green getaway in Salalah, Oman

Talk to any Omani and you quickly learn how patriotic they are – and rightly so. Dubai day-trippers have been exploring Musandam’s blue waters and Muscat’s ancient streets for years now. But while the scorching summer heat tends to put people off, head down the coast to Salalah and you’ll find a lush green paradise where the temperature rarely pushes 30°C.

Every summer khareef, the southeastern monsoon season, sees the dry landscape of the Dhofar capital come alive with overflowing streams, waterfalls, greenery and ripe fruit from banana and papaya plantations. With more resorts cropping up, there has never been a better time to catch Salalah at its best.

5 things to do while you’re there… 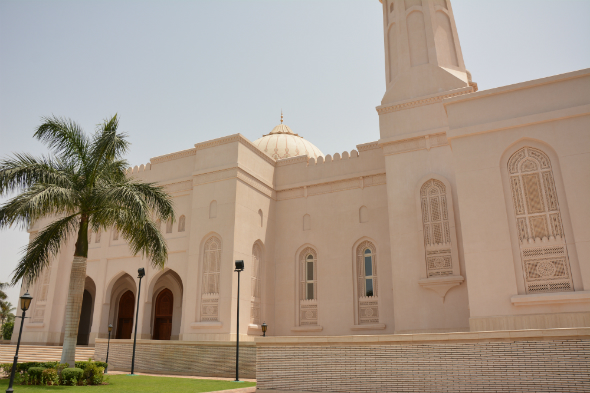 As any Salalah resident is likely to tell you, the city is the birthplace of Oman’s Sultan Qaboos Bin Said Al Said. That might explain why the Sultan Qaboos Mosque stands proudly in the centre of town. It has shady archways, spotless surrounding gardens and, inside, you risk getting neck ache admiring the glitzy chandeliers and ornate detail inside the dome. Visitors have to dress conservatively and can’t go inside during services.

This small souk might not look like much, but it is the place to discover Salalah’s long history with frankincense – the air is thick with it. It’s in the many incense burners, the delicate oils and perfumes, and in raw form by the bucket-load. 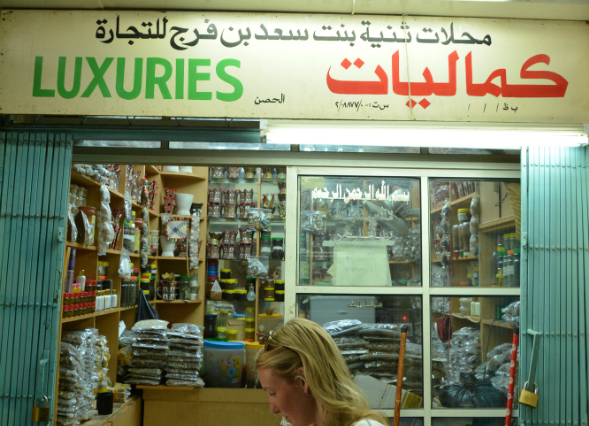 People have harvested frankincense in Dhofar for centuries and you’ll find locals sat outside their shops sorting through big sacks of the pebble-like nuggets, separating them by quality.

A stunning oasis in the Dhofar Mountains, gawk at the waterfalls and streams carving their way along – and through – the surrounding cliffs. 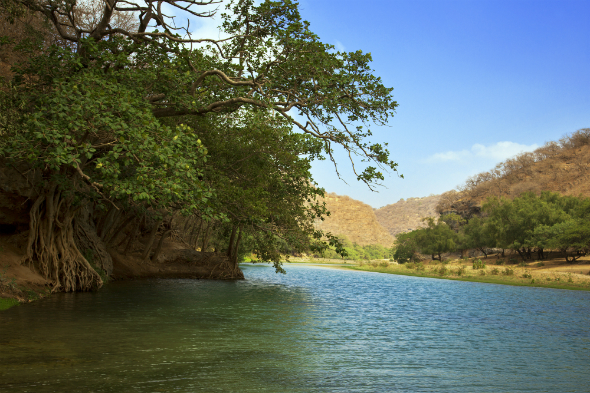 Large fig trees have rooted themselves precariously close to the wadi’s river and herds of camels and donkeys roam freely – all soaking up the best of the khareef. You’ll also find plenty of families picnicking near the cool waters.

For some truly epic views head out of town to Mughsail Beach. During khareef, strong undercurrents mean it’s not safe to swim, but the six-kilometre stretch of sand and turquoise waters make it well worth a visit – as do the herds of camels you’ll find enjoying a beach day. 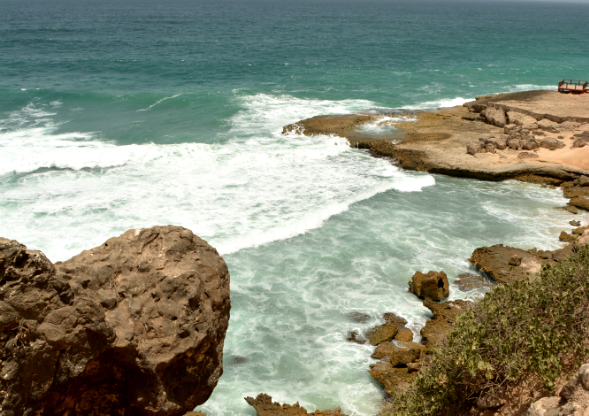 Even more impressive are the Al Mughsayl Blowholes at Marneef Cave. On a rugged outcrop overlooking the Arabian Sea, these natural holes in the stone grumble and roar like some mystical sea monsters before suddenly blasting water up and out a good 10 or 20 feet in the air, soaking any unsuspecting passerby. Be warned: it’s a bit of a tourist spot, with children playing ‘chicken’ over the grates, so try to get there early.

Rather than retracing your steps, take the scenic route through the Moon Mountains, or Jabal Al Qamar. About 2,500 metres high, these mountains are the highest in the region and named because centuries ago local tribes believed it was the closest you could get to the moon. 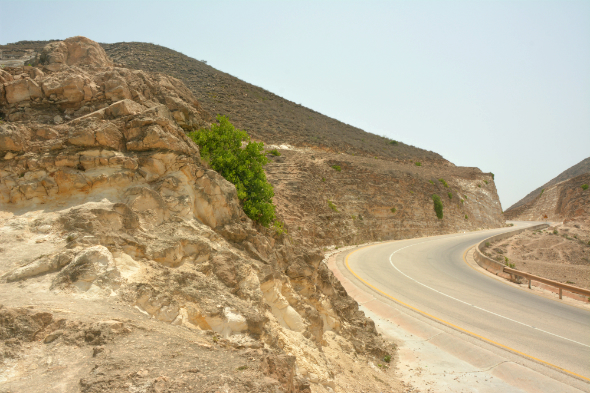 A modern highway has been carved into the mountain range, zigzagging up steep slopes and tight turns worthy of a James Bond car chase. The surrounding hills are a geologist’s dream, as they jump from dirt-brown to iron-red and bright white limestone every kilometre or so.
omantourism.gov.om

It’s one of Salalah’s most famous exports, but what exactly is frankincense? 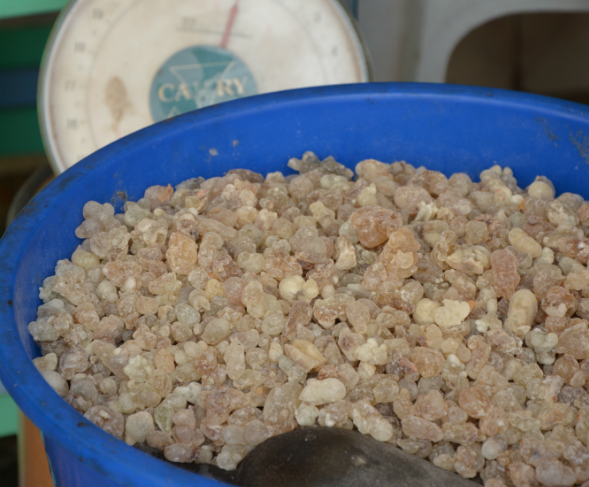 Farmers harvest frankincense by stripping back the top layer of the bark – being careful not to hack into ‘the bone’. Throughout history Dhofar has been famous around the world for its top-quality frankincense. Centuries ago it was considered more valuable than gold and southern Oman was an important stop on the ancient incense trade route, connecting Europe to South Asia.

It’s used as incense – often in religious ceremonies – and as oil for perfumes and medicine. We’re told that drinking frankincense-infused water helps improve memory and relieve asthma, too. 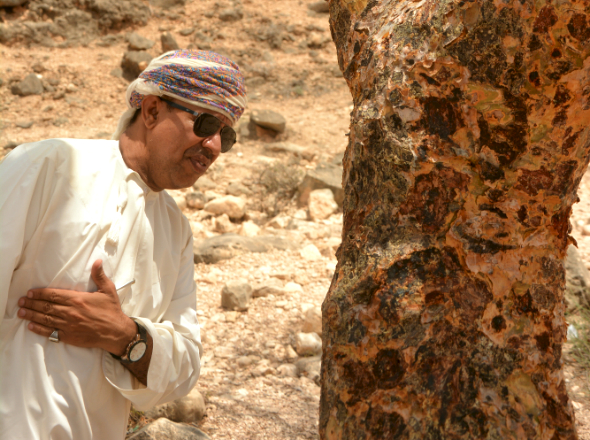 How to spot the best?

It all comes down to colour. Black frankincense is the cheapest. Green is said to have the purest smell and flavour. 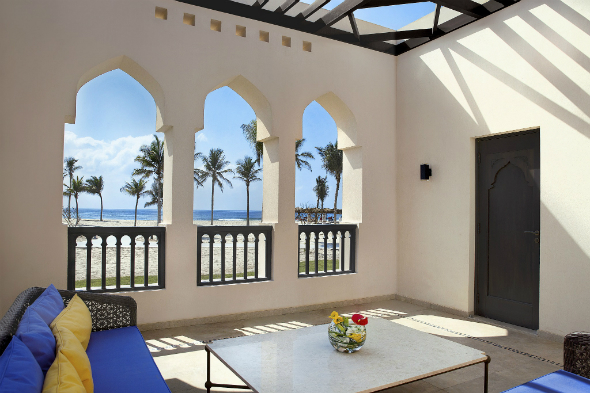 This five-star resort is huge and has an impressive stretch of beach. Its suites have their own balconies and terraces – ask for a sea view. Rates start at Dhs840 with breakfast.
Tel: +968 23275700.  rotana.com/salalahrotanaresort

A short drive from Sultan Qaboos Mosque, this is a good spot for families. There’s a child-friendly pool (with a slide), a playground, beach access and tennis courts. Rooms start at Dhs770 a night.
Tel: +968 23238000. ihg.com

News
Staycations
Travel
Travel Guides
EDITOR’S PICKS
UAE holiday dates announced for Eid Al Adha
READ MORE
Another update: Emirates extends suspension of flights from India to UAE
READ MORE
Coming soon: Everything we know about Ain Dubai so far
READ MORE
Khorfakkan set to open new tourist attraction 580 metres above sea level
READ MORE
MOST POPULAR
A fun new Saturday brunch is launching at MASTI Dubai
Review: Newton
Free chicken wings for three days at this celeb-fave Abu Dhabi restaurant
Review: Explore the Palm Jumeirah with a stay at St. Regis Dubai, The Palm
Etihad: India flights on hold until at least August 2
YOU SHOULD CHECK OUT
Our website uses cookies and other similar technologies to improve our site and your online experience. By continuing to use our website you consent to cookies being used. Read our privacy policy here.