Navigating Dragon Mart, a mall the size of a small country

We get lost among the thousands of shops that make up Dubai’s most bewildering and yet also oddly delightful mall – Dragon Mart.

With triumphant athletes stepping up on to the podium to collect medals at the Rio Games, I too took on an Olympic-sized challenge this week – an endurance test of physical and mental strength worthy of a medal. The flatmate dragged me to Dragon Mart.

For the uninitiated, Dragon Mart is a mall the size of a small country out by International City. But it’s no ordinary mall. It’s a collection of miscellaneous (mostly Chinese) madness housed in almost 4,000 ‘shops’ (or units made out of MDF and plywood). It’s the largest trading hub for Chinese products outside mainland China and where you’ll find everything you never wanted. It’s no secret that I’d rather stab a sharp pencil into my eyeballs than go to a mall but with tales of Dragon Mart’s randomness somewhat legendary, on this occasion curiosity got the better of me.

“Do you hate it already?” asked the flatmate, aka One Who Shall Remain Nameless. We’d just pulled into the car park. Admittedly, I was daunted; the sheer size of Dragon Mart makes Ikea look like a two-bit corner shop. I braced myself and ventured in. As someone who spent their pocket money in Glasgow’s Barrowlands market on dodgy pirate cassette tapes, it wasn’t that bad. At least now I know where to go if I need a couple of cinema seats, a chainsaw, scratchy taffeta dresses, giant gaudy ornaments that would make your eyes bleed, freaky six-foot tall ‘porcelain’ dolls and some pink astroturf. There was also lots and lots of glittery and sparkly stuff so One Who Shall Remain Nameless – a magpie in a previous life – was in her element. 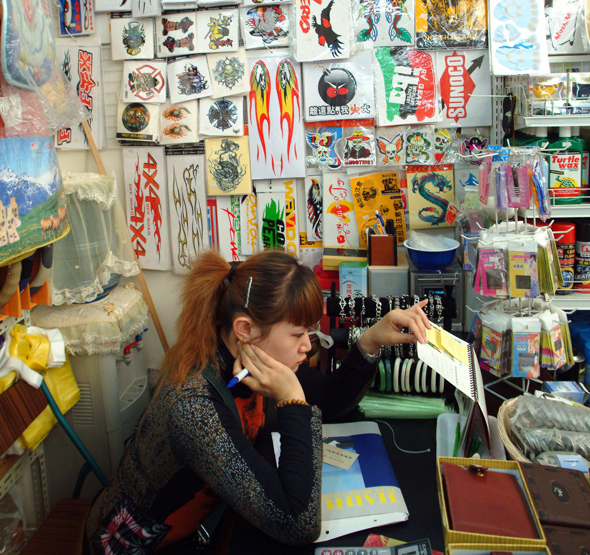 Dragon Mart – where you can buy absolutely everything ever made in China.

“What’s that?” asked One Who Shall Remain Nameless 2,784 shops later, pointing to a small fleshy coloured garment hanging in a shop window. We both stood for a moment, heads cocked to one side staring at the puzzle before us. “Oh, it’s buttless pants,” I informed her. “How do you know that?” asked the flatmate suspiciously, eyebrow arched to suggest that there was perhaps more in my knicker drawer at home than I’d care to admit. “I didn’t,” I answered. “I just spotted buttless leggings two shops down and figured it out.” We pondered how that wee twin set would work in Dubai…

There were plenty of other seriously horrendous clothes to assault the eyes – garments to make Kay’s catalogue seem cutting-edge couture. I suggested to the flatmate that rather than pass the same gift voucher back and forth every time one of our birthdays rolled around we should spend Dhs100 on the worst item of clothing we can find in Dragon Mart and insist the birthday girl wears it out clubbing at least once. “Thank God our birthdays have just passed!” said the flatmate, following up with, “It makes sense why you don’t have many girlie friends.”

READ MORE
*Your guide to shopping in Dragonmart*
*Why you should buy rugs in Dubai*
*Vintage, retro & pre-loved shopping in Dubai*

At one point, several hours in, the flatmate and I got separated. No need to panic: a mobile call later we agreed to meet again at the buttless pants shop. But it got me thinking that if you were a parent and lost your four-year-old child in this vast place, there was a slim chance you may be reunited by the time the kid turned 18.

I’m not going to lie; we went to Dragon Mart for a laugh more than anything, on a mission to seek out the shonky and the shady, and it was a right old giggle.

That we finally made it home (legs aching) having blown every cent of our budgets for the rest of the month is another matter entirely.

Keen to visit Dragon Mart soon? Here’s a map to help you plan your trip (trust us, you’ll need it): 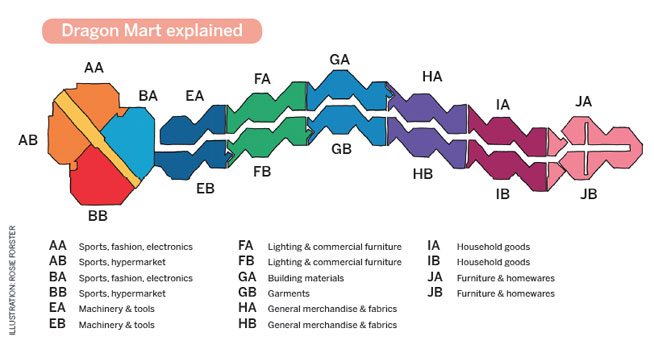 Nightlife
Things to do
EDITOR’S PICKS
UAE holiday dates announced for Eid Al Adha
READ MORE
Emirates extends suspension of flights from India to UAE again
READ MORE
Coming soon: Everything we know about Ain Dubai so far
READ MORE
Khorfakkan set to open new tourist attraction 580 metres above sea level
READ MORE
MOST POPULAR
It's Dhs350 to brunch, stay and play at the What's On Lock In this weekend
Exclusive interview: John Cena on his role as a 'douchey Captain America'
The stunning SLS Dubai hotel launches a luxe spa-cation
Pics of the week: Your best photos of the UAE
New entertainment venue Cue Dubai launches Friday brunch
Sharjah will soon be home to a floating theatre and other exciting projects
YOU SHOULD CHECK OUT
Our website uses cookies and other similar technologies to improve our site and your online experience. By continuing to use our website you consent to cookies being used. Read our privacy policy here.