The UAE has just bagged its second-ever Olympic medal

It’s been a long 12-year wait, but the UAE has just doubled its Olympic medal success.

The UAE won its first Olympic medal in 12 years late on Tuesday night at the Carioca Arena in Rio de Janeiro.

Victorious judoka Sergiu Toma, born in Moldova but given citizenship by the UAE three years ago, dedicated it to the people of the Emirates for supporting him on his journey to the podium.

“What can I feel? I am happy, no?” he said immediately after defeating Matteo Marconcini to take bronze in the  under 81kg weight class at the Rio Games. His face was bruised, his chest covered in scratches and his bottom lip bled, but he smiled as he spoke. “I want to say thank you to everyone who was close to me and supported me: people from my country, Moldova; people from the UAE; and my coach. This is a medal for the UAE, for sure.” 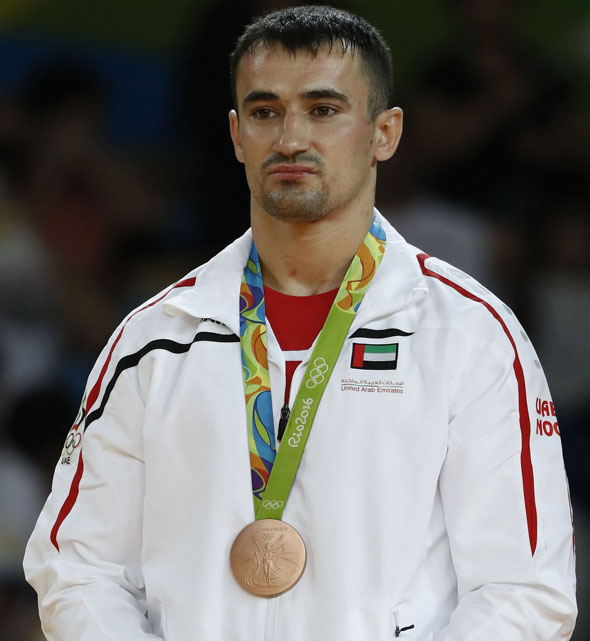 TEARS DURING THE CEREMONY

With his Eastern European countenance, few people inside the 10,000-capacity arena would have guessed the stocky judoka standing with the bronze medal around his neck was the representative of the Emirates. But it was he who, as the UAE flag was raised at an Olympic medal ceremony for the first time since Sheikh Ahmed bin Hasher Al Maktoum won gold in Double-Trap Shooting in 2004 in Athens, looked up at it and wiped his eyes.

“It is an important medal because it is the first time the UAE give me the possibility to represent this big country,” Toma, who switched allegiances three years ago alongside five other Moldovan judokas as well as coach Vasile Colta, told What’s On Dubai. “We always dreamt of giving the best results for this country because they always support the team. They never say no. If the coach says we want to go to Tokyo, the UAE say ‘OK’ and organise a training camp for us there. So I want to say thank you and I hope it is not the last medal.”

READ MORE
*A guide to the Rio 2016 Olympics and the UAE’s athletes*
*Dubai could bid for the Olympics soon, say Sports Council*

Toma was born in the Republic of Moldova in 1987 and competed at the Beijing Games in 2008 and again in London four years later under the flag of his home country. However, in 2013, just two years after being named Moldovan Athlete of the Year, he took up citizenship with the UAE. Yesterday, for him and for the Emirates National Olympic Committee, the decision paid off.

HOW HE BAGGED THE WIN

Toma started his day’s work as chief benefactor when Germany’s Sven Maresch was disqualified and then triumphed against Brazilian Victor Penalber and Japan’s reigning world champion, Takanori Nagase. Although he narrowly lost to Russia’s eventual winner Khasan Khalmurzaev in the semi-final, judo rules award two bronze medals so he was afforded another medal chance against Marconcini. He claimed the victory in emphatic fashion, flipping the Italian over and landing him on his back.

“I lose honestly [in the semi], but I am delighted with bronze, for sure,” he said. “In Moldova, not everything is possible like it is in the Emirates and a sportsman’s career is short so I am very happy to to win this medal and want to say thank you to the UAE. They have given us guys a chance to represent them and we always believed and did everything possible to reach the top level.”

The UAE has taken three Moldova-born judokas to Brazil this month, with Victor Scvortov reaching the last-16 in the -78kg weight class on Monday and Ivan Remarenco scheduled to contest the -100kg tomorrow.

So, can we make it a hat trick?

Quite possibly – we’ve still got judoka Ivan Remarenco competing in the 100kg category on Thursday, Alia Saeed racing 10,000m in the pool on Friday, and Sheikh Saeed bin Maktoum and Saif bin Futtais shooting on Friday.

Runner Saood Al Zaabi and swimmer Nada Al Bedwawi also have heats (and semis or finals if they qualify) next week.

News
Sport & Fitness
EDITOR’S PICKS
9 royal-approved Dubai restaurants
READ MORE
16 of the best beach bars in Dubai for sundowners
READ MORE
Bla Bla: Dubai's huge new beach club is set to open this Thursday
READ MORE
Where to get the Covid-19 vaccine in Dubai, Abu Dhabi and across the UAE
READ MORE
MOST POPULAR
Dubai Food Festival is set to return on February 25
Brand new eco oasis Al Fay Park opens on Al Reem Island, Abu Dhabi
9 exciting things to do in Abu Dhabi this weekend: January 21 to 23
Don't miss this cool collaboration between two top Dubai restaurants
Sale: Emirates and Etihad slash prices on flights around the world
YOU SHOULD CHECK OUT
Our website uses cookies and other similar technologies to improve our site and your online experience. By continuing to use our website you consent to cookies being used. Read our privacy policy here.