Loosen your belts, there are seven new restaurants on the Palm

Peruvian, American, European, Arabic, Ethiopian… you can now eat your way around the world in just 120 metres of beachfront.

Dubai’s not exactly short of places to eat… but hey, you can’t have too much of a good thing.

Especially not ones with a view like this, right?

It’s the brainchild of developer Nakheel, who’ve also added 37 studio units to the project (said to cost around Dhs1.15 million each). 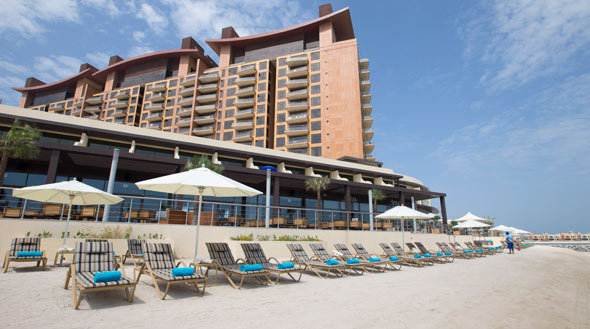 READ MORE
*Love an after-dark dip in the sea? You should stop*
*There’s now a Ripe Market in the Dubai Marina*
*Video: Tigers having a paddle near the Burj Al Arab*
*Our picks: The 12 best new brunches in Dubai*

Now, while we can’t quite afford a studio right now, we can definitely afford dinner – so what’s on the menu?

Cuisine from around the world

Club Vista Mare’s seven eateries can seat 2,000 diners at a time, and all restaurants offer pretty unbeatable views of the Palm’s eastern shoreline (the restaurants are still awaiting their licenses). All have terraces and some even have seating directly on the beachfront, so we’re thinking this will be a prime spot come the cooler winter months.

So, naturally there’s a Peruvian restaurant (seems Dubai can never have enough) called Aji, although this one has a Japanese twist, and you’ll find plenty of seafood at top-end Ibn Al Bahr.

For the healthy eaters, there’s Breeze – a “beach grill concept” that’ll include a raw bar and deli counter – and those seeking traditional Arabic fare can hit up Abyat.

For American comfort food and European plates try The Tap House, or pizza, pasta and the like will be flowing at Simply Italian.

Our next few weekends just got sorted…

Eat & Drink
News
Restaurants
Things to do
EDITOR’S PICKS
Bla Bla: Dubai's huge new beach club is set to open this Thursday
READ MORE
16 of the best beach bars in Dubai for sundowners
READ MORE
Watch: A look inside Conor McGregor's Dhs20,000 per night Dubai villa
READ MORE
Where to get the Covid-19 vaccine in Dubai, Abu Dhabi and across the UAE
READ MORE
MOST POPULAR
Need a few laughs? These comedians are coming to Dubai in February
Is David Guetta going to perform in Dubai? It looks like it...
Amazonico Dubai launches new brunch and rooftop after-party
A stunning bright pink lake has been discovered in the UAE
Review: Goldfish Sushi & Yakitori, Dubai
YOU SHOULD CHECK OUT
Our website uses cookies and other similar technologies to improve our site and your online experience. By continuing to use our website you consent to cookies being used. Read our privacy policy here.