Review: Couqley, a French bistro tucked away in JLT

A French bistro from Beirut: is this another success story for JLT’s blossoming restaurant scene? Here’s what we thought…

If a Dhs95 bottle of Bordeaux and a smashing steak frites sounds like your dream night out then this fresh French bistro in JLT is likely to become your new regular.

There are already two Couqleys in Beirut, and like so many of JLT’s best nights out, the Dubai Couqley is tucked unassumingly underneath a hotel (the Mövenpick).

Brought to us by the same people as the almost-too-popular-now Stereo Arcade, the restaurant opened in early summer and already has a loyal Lebanese following.

Close your eyes and picture a French bistro – now what you’ve imagined is exactly what Couqley looks like: vintage posters and dark woods with touches of red check cushions. It’s derivative, yes, but it’s done properly and it works. 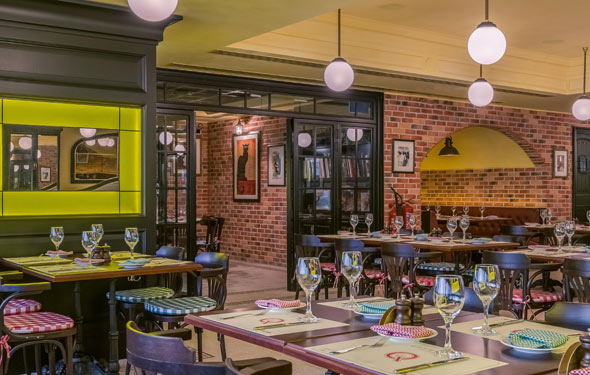 The food is simple bistro fare too, but well crafted. Executive chef Alexis Couquelet has had star bosses, including Alain Ducasse and Jean Georges, and this Lebanon-based Frenchman is obviously very passionate about a roux: the sauces made the meal.

The not-chewy and very earthy escargot (Dhs49 for six) swum in a pungent parsley and garlic butter; the crisp iceberg in the Caesar salad (Dhs57) was coated in a properly emulsified, salty house dressing, and the open, brie-topped Angus burger (Dhs137) came on a plate dotted with a punch of umami in the form of a truffle sauce.

The pièce de résistance, however, was the dish this place is famous for, the steak frites (Dhs97). The pan-fried fillet was bathing in the secret house sauce, which is a beef jus with a touch of cream and buckets of flavour: this is the kind of roux you’ll mop up with your fries and bread (and then your fingers when you run out of carbs). 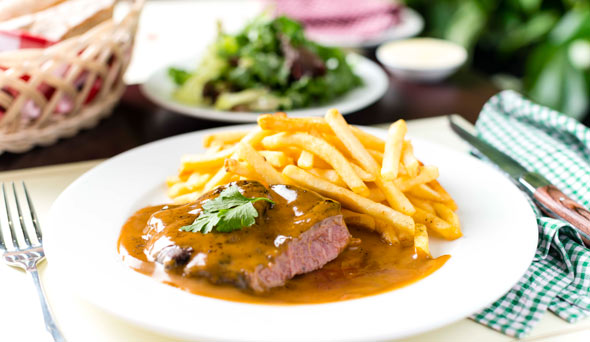 The steak frites at Couqley isn’t the most elegant plate of food in Dubai, sure, but it ticked our flavour boxes.

Other details added up to make this place a winner: the bread basket was warm and fresh and the burger was clearly ground in-house (the meat was top quality and we’d feel confident enough to have it rare). The fries were crispy and moreishly salty, the chocolate fondant (Dhs41) was properly gooey in the middle and the big chunk of French toast, or pain perdu (Dhs43), had the right amount of crispy crust. 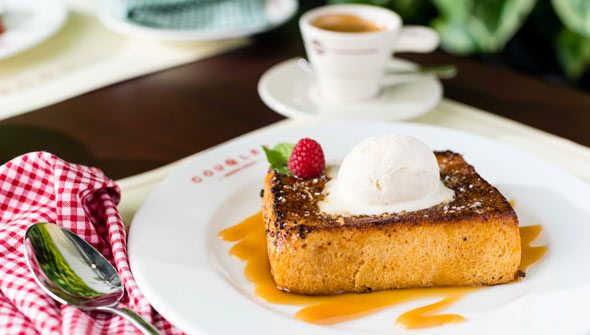 The French Toast is a big ol’ chunk of carb.

One thing to note though is that this is cuisine laden in butter, cream and more butter, so a meal here is all about consuming calories with abandon (it will well and truly blow your My Fitness Pal allowance for the day).

But we’ll still be back. Why? Well because let’s be honest: a fancy, deconstructed dining experience is delightful every now and then, but on a run-of-the-mill Thursday night a comforting plate of chips, well-cooked steak and rich gravy is just what the doctor ordered. Well, our GP would probably rather we ate a plate of broccoli, but you see what we’re saying…

Atmosphere: You could go there with the family or with a group of friends – it sits right down the middle of casual and party.

Price: Around Dhs450 for a meal for two.

Eat & Drink
News
Restaurants
EDITOR’S PICKS
So, when is the next UAE public holiday in 2021?
READ MORE
All of the lavish new hotels set to open in Dubai in 2021
READ MORE
16 of the best pool passes in Dubai that are fully redeemable
READ MORE
All of the restaurants at West Beach, Palm Jumeirah
READ MORE
MOST POPULAR
Abu Dhabi tourists can now get free vaccines through SEHA
Before and after: Stunning photos capture Dubai’s incredible transformation
Etihad wins Best Cabin Crew and Frequent Flyer Programme awards
Flash sale: This Dubai hotel has 40 per cent off and free attraction tickets
The best deals we've found in Amazon's Prime Day sale
YOU SHOULD CHECK OUT
Our website uses cookies and other similar technologies to improve our site and your online experience. By continuing to use our website you consent to cookies being used. Read our privacy policy here.