It’s sweaty, hectic and yet distinctly cosmopolitan: here’s how to eat your way around this Asian metropolis.

The Hong Kong skyline is a shock to the system for those acclimatised to the dunes of Dubai – prehistoric-looking moss-green mountains house the skyscrapers that make up the modern metropolis. At street level you’ll find a muddle of neon signs, hoards of people and the wafting smells of street food. And while yes, there’s hiking, cultural sights and boat trips to be had in the Chinese territory, we hopped to Hong Kong for a long weekend to do one thing only: eat.

PS: Yes, there’s a holiday weekend coming up. Read all about the days we’re likely to have off here.

THREE DAYS TO EAT THE CITY

Planning to fill your tummies with delicious Hong Kong delicacies in just a weekend? Start by booking a food tour through the Central district of Hong Kong Island.

Within three hours you’ll have eaten turtle jelly, which tastes like oolong tea, gone to a family-run wonton noodle house that sells 800 bowls of soup a day, and learnt about the old wet markets and food stalls of Hong Kong (and how they’re becoming endangered due to legislation and urban crawl). 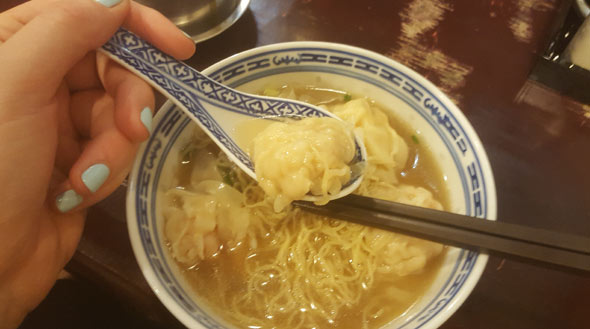 There are six snack locations in total and the local guide educates visitors on everything from herbal tea to rent prices (they’re so high most restaurants can’t afford to have kitchens on the island and so they ship their food in).

Day two: Take yourself on a trendy food safari

Start day two by exploring Hong Kong’s coffee scene – The Cupping Room (facebook.com/CuppingRoomHK) and Elephant Grounds (elephantgrounds.com) are your best options. Then visit the famous and cheap Michelin-starred Tim Ho Wan, located at the train station at IFC Mall. You’ll queue for a seat for 30 minutes but the steamed rice flour rolls are soggy excellence.

Continue your food safari of the hip independent restaurants of Hong Kong Island’s Sheung Wan and Central districts at night. On our trip we made three stops, which meant 20 minutes of walking and about 3,000 calories consumed. (Note: all of these restaurants are small and intensely popular, so start your tour sharp at 6pm when they open to ensure you get a seat.)

Start with excellent izakaya at Yardbird (which is right above Hollywood Road on Bridges Street, yardbirdrestaurant.com) – the succulent chicken meatballs with egg yolk sauce are now on our list of top things we’ve ever eaten.

Then stroll just down the road to Little Bao (little-bao.com), which is on Staunton Street opposite PMQ, a building where you’ll find a nice blend of indie fashion and design shops. This trendy bao bar’s rice flour sliders are filled with saucy, robust Taiwanese, Cantonese and Korean flavours. 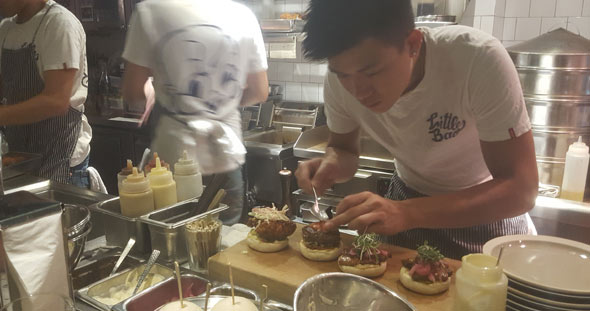 Finish your safari meal at Ho Lee Fook (facebook.com/holeefookhk), a dark, underground and modern Cantonese joint on the very steep Elgin Street. The fresh, herb-laden calamari tastes of the sea – in a good way. 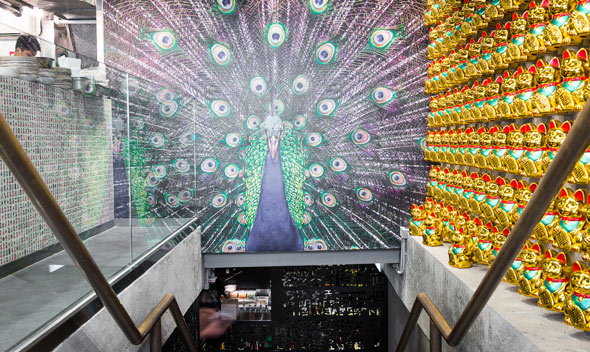 End your long, gluttonous weekend by rolling yourselves to Kowloon – which is on the mainland China side of Hong Kong. If you’re staying on Hong Kong Island you can catch the Star Ferry (Dhs1.18 one way) over to Kowloon. Explore the sights, sounds and bargains at Temple Street night market or splurge in the shopping district Tsim Sha Tsui.

After working up a little appetite, finish your trip with an old-school Cantonese experience at T’ang Court (langhamhotels.com), a three-Michelin-star full silver service spot in The Langham hotel.

Mingle with the Hong Kong elite as you taste true Chinese delicacies while surrounded by million-dollar art adorning the walls. It’ll be an experience unlike any other you’ve tasted or seen in Dubai – and that’s why we travel.

Hong Kong was a British colony until 1997 when it became a special administrative region of China. What does that mean? Well, it’s part of China, but has a separate political and economic system (and a different feel).

But Kowloon is actually part of the Chinese mainland and a popular day trip from Hong Kong is Shenzen, a city of seven million where you can travel to for some serious bargain hunting. You’ll find Luoho Commercial City right on the Hong Kong border: this shopping centre puts Dragonmart to shame, and in its 700-plus shops you can find everything imaginable.

There’s also Dafen Oil Painting Village where you’ll see thousands of artists producing exact oil replicas of the world’s great works of art (thankfully you’ll find original stuff too). Even if you don’t want to buy a piece for your wall, seeing one man pump out a few Monets an hour is an interesting experience. 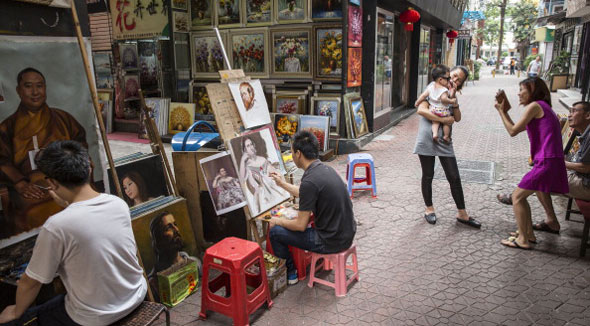 Three things to know before you go 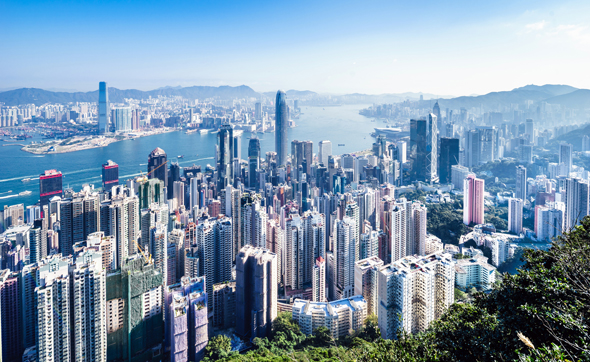 The flight time to Hong Kong comes in at just under eight hours, so it’s a long weekend destination rather than a two-night sojourn. The other tricky thing is that they’re four hours ahead of us, so midnight there is 8pm here. Do what we did and never acclimatise; be a night owl while there and the jetlag won’t hit you.

We plumped for a roaming data package, which meant we could pop things in Google Maps and walk with ease from restaurant to restaurant.

Yes, noodles, bao and dim sum will be top of your list, but here are two less obvious dishes you also need to try… 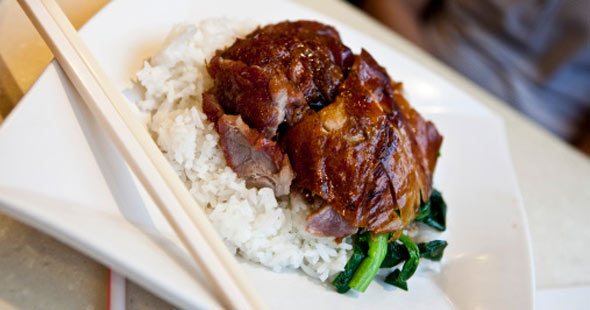 Crispy skin, soft, succulent meat – this is a Hong Kong star dish. Make sure to order it with plum sauce. Go to Michelin-starred 30-seater cheapie Kam’s Roast Goose in Wan Chai for a plate of goose for around Dhs35. 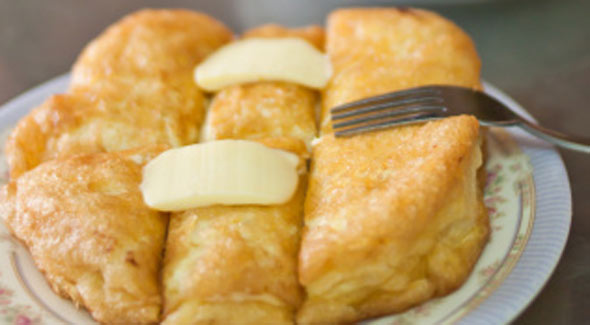 By the end of your trip when you’re peak wonton and sick of soy sauce, try this sweet delicacy that’s served in cha-chaan tengs (aka, traditional Hong Kong cafeterias that look like they’re from the ’50s). What is it? Two slabs of French toast smothered in condensed milk and filled with peanut butter. An absolute artery buster.

dnata Travel has a good bundle deal for two people that means three nights at the Intercontinental Kowloon (with breakfast) and two return flights with Cathay Pacific for Dhs10,190. The InterContinental is a great option as it’s a grand hotel right on the water that boasts amazing views, slick service and easy access to public transport (it’s also home to Nobu). 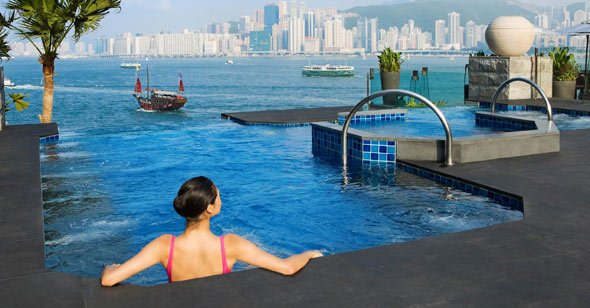 News
Staycations
Travel
Travel Guides
EDITOR’S PICKS
So, when is the next UAE public holiday in 2021?
READ MORE
All of the lavish new hotels set to open in Dubai in 2021
READ MORE
16 of the best pool passes in Dubai that are fully redeemable
READ MORE
All of the restaurants at West Beach, Palm Jumeirah
READ MORE
MOST POPULAR
7 reasons why Fouquet's needs to be top of your dining bucket list
Hit the pause button with this three-day retreat by 3 Elements
Quarantine requirement for Abu Dhabi tourists will likely end by July
9 cracking Dubai roast dinners with drinks included
Ras Al Khaimah reveals 20 new attractions coming to the emirate
YOU SHOULD CHECK OUT
Our website uses cookies and other similar technologies to improve our site and your online experience. By continuing to use our website you consent to cookies being used. Read our privacy policy here.