The touching story behind this Emirati mum meeting her royal idol

Sheikh Mohammed has millions of fans, but not all of them are lucky enough to score an audience with him.

Dubai’s ruler is an icon – there’s no doubt about that.

The man helped to build the city we see today from the ground up, so it’s no no wonder he’s accumulated some fans along the way.

However this particular encounter has warmed our hearts more than most.

However, Al Matroushi let her mother be the one to receive the award.

Why? As it had always been her mum’s dream to meet Sheikh Mohammed.

More…
*Sheikh Hamdan’s falcon destroys championship for falconry*
*Sheikh Mohammed’s daughter volunteers for Food Bank*
*Unsure how to do good in 2017? Sheikh Mohammed has some ideas*

Talk about a great way to honour the woman that’s raised you (until the probably non-existent day we win an award, ours will have to make do with nice toiletries).

Here’s the image of the two meeting (which we love everything about, from the daughter’s kiss to Sheikh Mohammed’s grin): 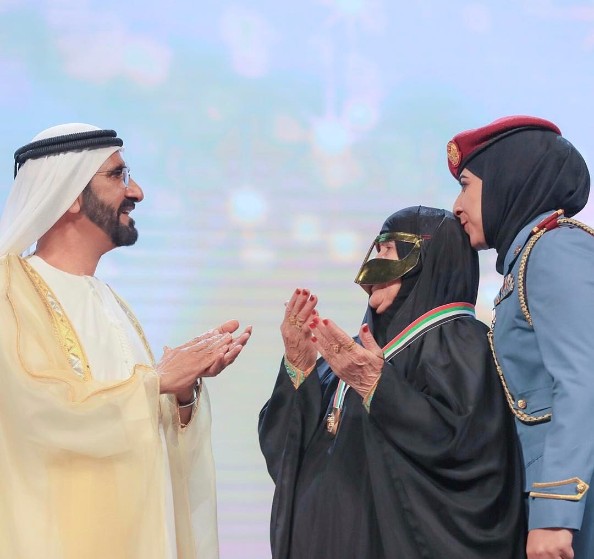 During the awards, the ruler spoke on the theme of excellence in a rousing motivational address.

“We see in this ceremony a prime opportunity for galvanising efforts and channelling them to move our nation forward towards excellence, and to serve our people and maintain the UAE’s leading position in all sectors and at all levels,” said Sheikh Mohammed, according to the Khaleej Times.

“We believe excellence is an ever-evolving journey, one we can build through expertise and experiences to devise forward-looking plans and formulate solutions for the challenges that face us.

“We maintain a realistic outlook regarding excellence, which we do not view as an achievement, but rather a challenge. The achievement is the future that we build for the people of the UAE.”

On that note, we’re very much looking forward to what the UAE has in store for 2017…