Want to know what roads to avoid this weekend? Read on…

Remember how the Dubai Tour shut down roads across the emirate last February? Well, it’s back this week, and it’s going to lead to road closures again, so just factor that into your plans (maybe take the metro?).

The five-stage professional cycling tour whizzes through town from Tuesday January 31 to Saturday February 4, with superstar cyclists taking on the challenge, which is now in its fourth edition. Stand on the right Dubai street at the right time and you’ll get to see Mark Cavendish, Marcel Kittel and Elia Viviani battle it out on their bikes. It’s a pretty cool sight.

But yes, for many of you, the most important news will be how the tour affects the traffic around you, so that’s what we’ve nutted out for you here.

First, here’s a video guide of the route:

Note: The police follow the tour around and close and reopen the roads fairly dynamically, so you can expect each road to only be closed for around 30 to 45 minutes, but follow the RTA on Twitter for timely updates on the day. 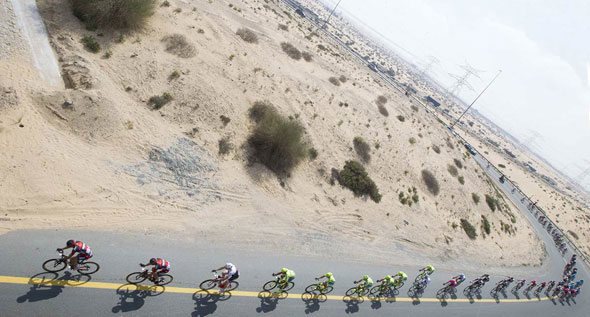 The tour starts at 11am on Tuesday from the Dubai International Marine Sports club along King Salman bin Abdulaziz Road. It will then run along Sheikh Zayed Road Abu Dhabi-bound before it heads inland along the length of Jebel Ali Lahbab Road towards the Camel Racetrack.

It will then come back in towards the ocean along Al Qudra Road, before heading back towards E611 and the Hamdan bin Mohammed bin Rashid Sport Complex (it will reach here at about 1.30pm).

It will then head back along the other side of E611, returning along Al Qudra Road towards Motor City. There’s then a major detour through Jumeirah Golf Estates via Sports City (around 2pm).

After this it will head along Hessa Street and D72 and then cruise through the Jumeirah Islands area (around 2.30pm to 3pm). After that it will come over First Al Khail Street to Al Falak Street and Media City (around 3.10pm) before heading towards Dubai Internet City and up along the trunk of Palm Jumeirah, taking on a frond, and then finishing at the Atlantis around 3.30pm.

We caught the tour as they whizzed through Dubai Media City (and saw some major traffic near Al Falak Street because of it):

And here are the #DubaiTour cyclists whizzing through #dubaimediacity … there are road closures ALL week… check whatson.ae for full details so you don’t get stuck in a jam. 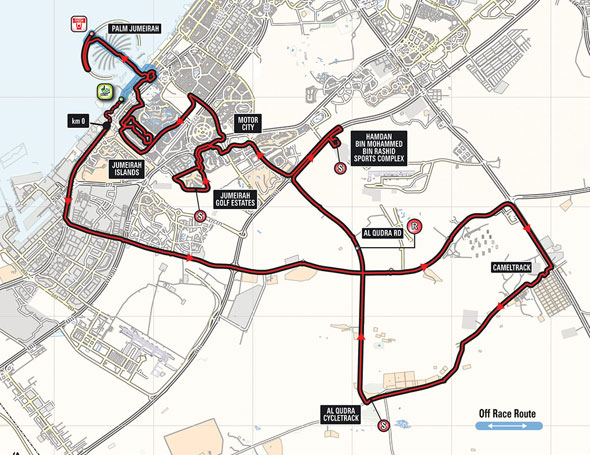 Here’s a guide to what time of day the tour will run through each road (the timings are on the right, with the three different times estimates based on the cyclist’s speed): 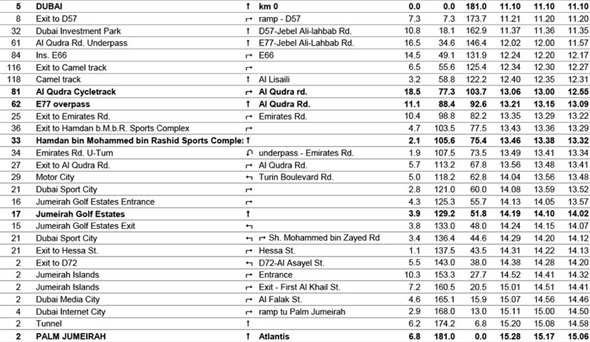 This stage is longer than stage one, but spends a lot of time outside of Dubai. It starts at DIMC (same as stage one) and then along King Salman Road and then along Umm Suqeim Road until Al Khail.

It will then run along Al Khail Road (around 11.20am), detouring through Dubai Design District before running along E611 until it hits Sharjah around 12.28pm. The rest of the tour runs along the coast until it hits RAK. 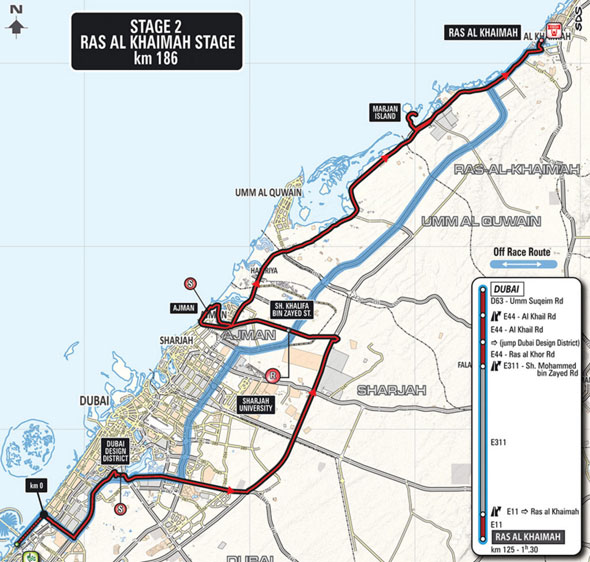 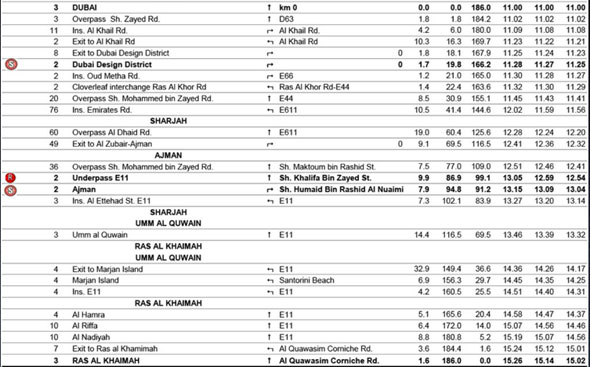 This stage starts at DIMC again, running along Umm Suqeim Street and Al Khail Road just before 11am before roaming around Dubai Silicon Oasis and Academic City (if you work here, they’re passing many streets in the area from about 11.30am to 12pm).

They will head along Al Awir and Emirates Road until they hit Sharjah. They’ll then cycle all the way to Al Aqah (nice spot to end up in at least). 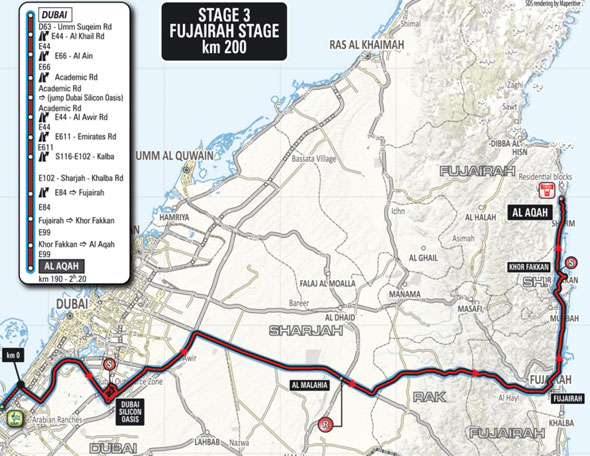 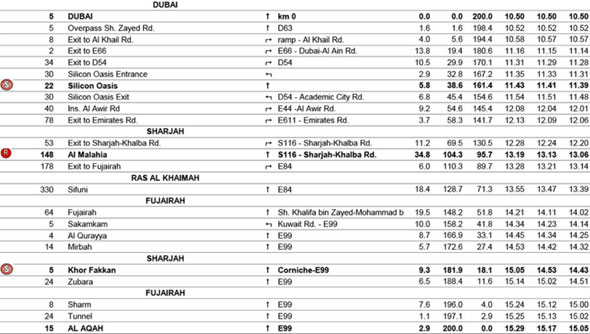 This stage also runs from DIMC along King Salman Street to Umm Suqeim Road. It will also run along Al Khail Road, Ras Al Khor Street and Aweer Street before heading into Sharjah, through Fujairah, and passing down to Hatta. 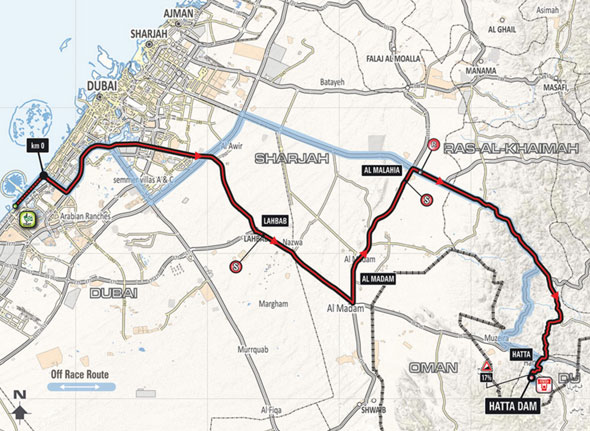 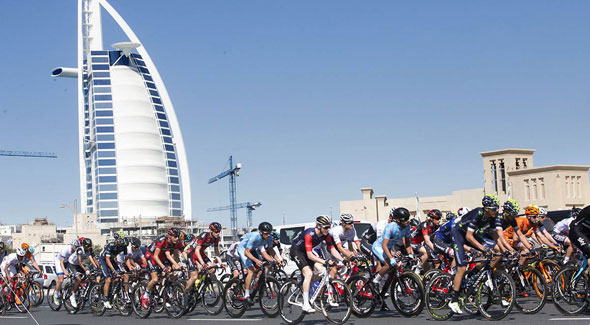 This is definitely the Dubai-heaviest day (but, thankfully it’s a weekend). It starts around 12.35pm, running down Umm Suqeim Street before turning into Al Quoz and passing through D72 towards Al Waha Street and Meydan Street (12.53pm).

Around 2.49pm it will reach Union House and the flag, and will then traverse the length of Jumeirah Beach Road before turning onto Al Wasl near the Burj Al Arab (it will reach Al Wasl around 3.14pm). Once on Al Wasl it’ll head all the way to Safa Street and then City Walk, where the whole tour will end around 3.20pm. And this will be the end of the road closures… 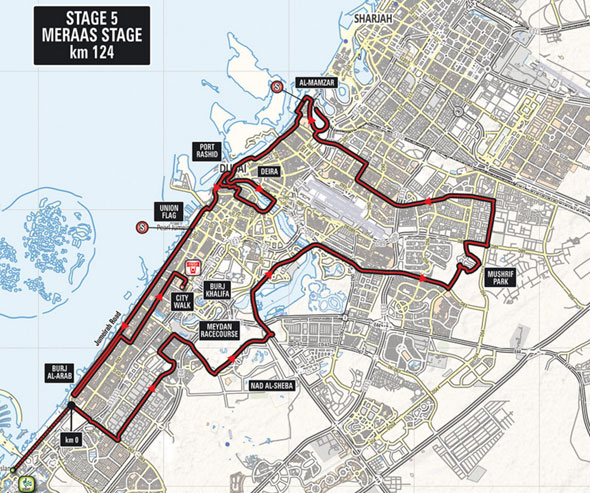 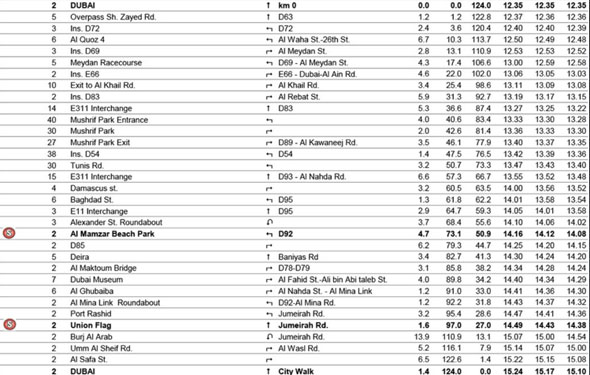 News
Sport & Fitness
Transport
EDITOR’S PICKS
Ramadan in Dubai: 50 iftars to try
READ MORE
Where can Dubai residents travel? Check out these 14 destinations
READ MORE
Rumours, facts and reveals: New Abu Dhabi bars and restaurants
READ MORE
UAE announces reduced working hours for Ramadan 2021
READ MORE
MOST POPULAR
There's a 30 per cent sale taking place during the long weekend on LegalHomeDelivery.com
Pics of the week: Your best photos of the UAE
Here's why you need to visit Mimi Kakushi's new Friday lunch
New films to watch in cinemas this week: May 13 to 19
Torno Subito's new lunch menu offers a quick mid-week vacation
YOU SHOULD CHECK OUT
Our website uses cookies and other similar technologies to improve our site and your online experience. By continuing to use our website you consent to cookies being used. Read our privacy policy here.