Meet one of theatre’s craziest troupes before their Abu Dhabi performances this week
Not many stage shows are as weird and wacky as Blue Man Group. The show, which started in New York way back in 1988, stars three curious, and slightly bonkers blue men, and tells their story through non-verbal communication – they dance and use musical instruments and comedy to interact with the audience, but they don’t say a single word throughout the performance.
Blue Man Group performed at Dubai Opera last week, and from April 18, they start a five-day run of shows in the nation’s capital at the du Forum. 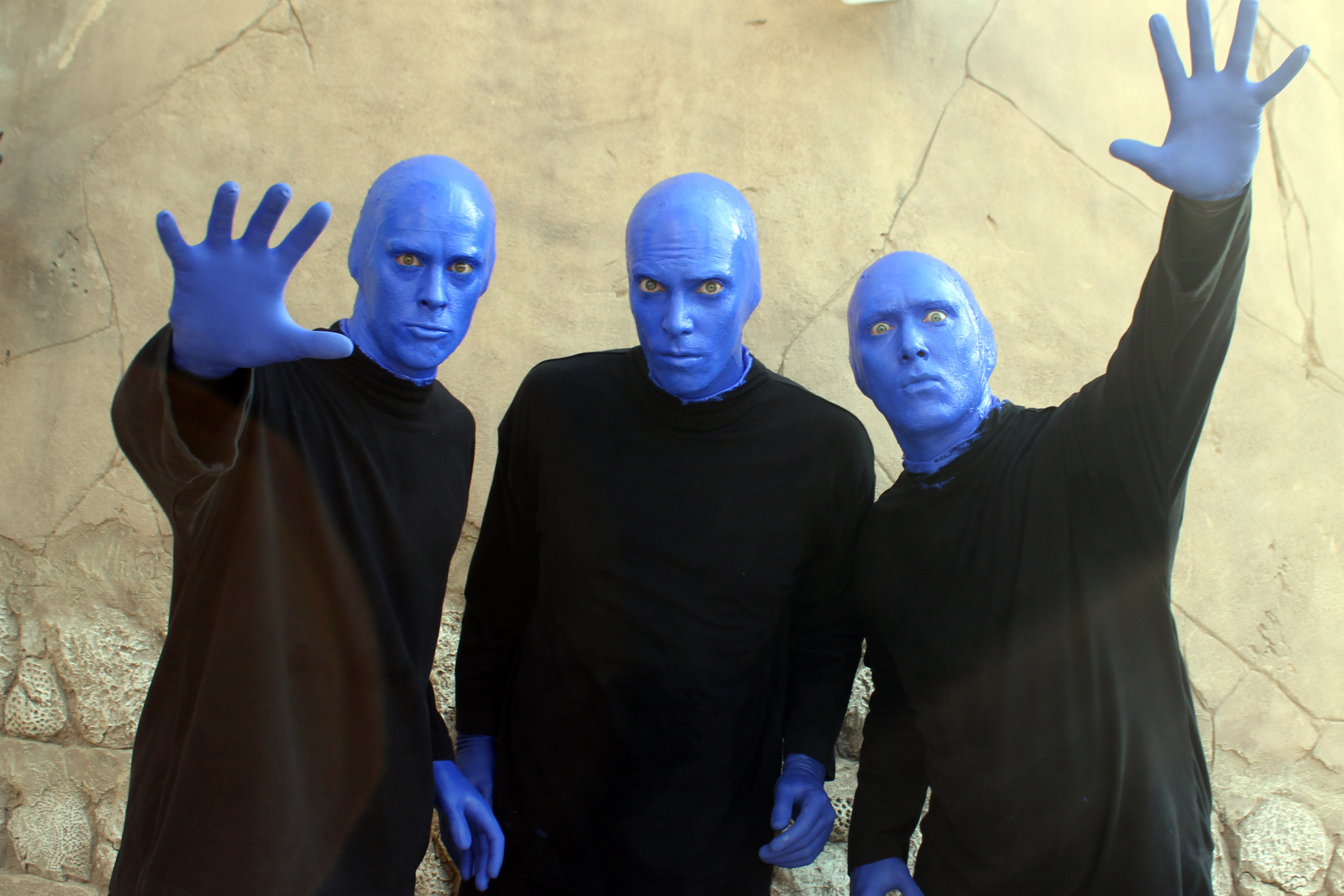 The concept is the brainchild of three New York flatmates, who came up with the idea in 1988 – they painted themselves blue to host a funeral for the 1980s in Central Park, where they burned a selection of yuppie effigies and a Rambo action figure. They were spotted by MTV and soon began staging small performances across the city. Founders Chris Wink, Matt Goldman and Phil Stanton quickly found themselves under increased demand, performing six days a week for three years and turning in more than 1,200 consecutive shows, before Stanton cut his hand and the group was forced to turn to an understudy for the first time ever – an event they later described as “catalytic”, but one that opened their eyes to the possibilities of replicating themselves. Now, there’s around 60 active blue men performing all over the world and their performances embrace the surreal – previous shows have featured lobster-shaped headwear, seen Twinkie cakes sawn in half and cereal used as percussion.
What’s On popped down to Abu Dhabi’s Yas Waterworld to meet the blue men ahead of their Abu Dhabi performances, along with two of the people behind the UAE shows – Meridian is a performer from Chicago who has worked with the Blue Man group for around 12 years, while Tony Aguirre, from Miami, is the show’s musical director.
Can you explain exactly what Blue Man Group is about?
Meridian: The show is an experience, it’s not something you just watch – we take you on a journey. It’s full of music and it’s a story told without words and it’s celebrating the joy of being human and life with an audience.
Aguirre: You meet these blue men – they’re from somewhere else, we don’t know where but it doesn’t matter – and over the 90-minute show, we see our world through different eyes. At the end you realise we’re all not very different. We’re all connected as one group – the blue men, the band, the audience and we’re laughing together at the end of the day.
Meridian: It’s the audience’s story we’re telling, not so much the blue men’s.
How did the crowd respond in Dubai? And how do different audiences respond to the show?
Aguirre: The response in Dubai was great. One thing I love about touring internationally with this show is that audiences react to the story differently. The audience is the fourth character so we’re always presented with new challenges and surprises. We were in China for four months and they didn’t laugh in the same places Western audiences do. They laughed at parts of the show we weren’t use to people laughing at. It resonates differently with different people.
What can the Abu Dhabi crowd expect from the show?
Aguirre: We have a couple of things planned for the audience in Abu Dhabi – but one thing is for certain, you can expect us to make a mess. You do not want to be an usher at the theatre once we’re done.
Has the show stayed true to the original format from the 1980s?
Meridian: We’ve always stayed true to where the show started out. It’s always been about curiosity and culture. Obviously, culture around the world has evolved – new things appear, so the show evolves to respond to that, but the message always remains about connecting and looking at things from a new perspective. 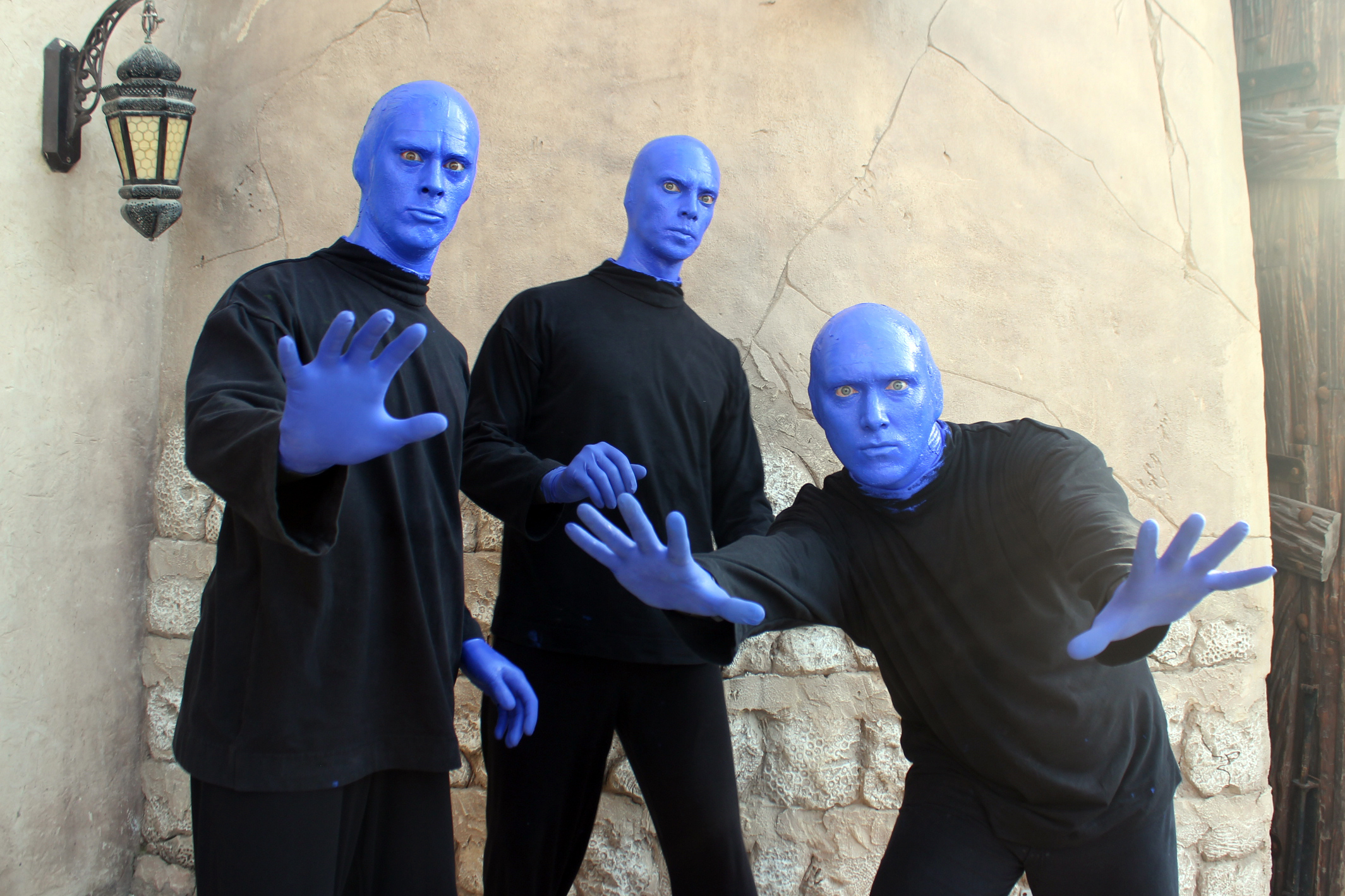 The show involves audience participation, what are your favourite memories of meeting people?
Aguirre: The audience is such a huge part of the show and we don’t know how they will react, so that presents an opportunity for something new and exciting.
Meridian: Interaction with the crowd is crucial to our show.
Aguirre: One time, a guy in the back row started swinging his prosthetic leg around to get the attention of the blue men.
Meridian: When we bring guests up on the stage, it’s improv – they’re not planted, they’re not briefed beforehand on what we’re going to do. We’re looking for a person who will be like a blue man and be curious about us like we are about them. We’re not trying to make fun of people, we’re about connecting with people. We want them to have a non-verbal dialogue. One time I picked a woman out the audience who was holding her baby on her lap. I assumed she’d hand the infant to her husband, but she brought the baby on stage, which had never happened before. It was really magical to watch this kid interact – he wasn’t able to speak and he was looking at the blue men with wonder, it’s like how the blue men interact with the world, with wonder and curiosity. We were learning from the child to be ourselves, in a way.

What skills do you need to be a Blue Man?
Meridian: You need to learn the little skills, like playing percussion, but what you really need to do is find your own open spirit to connect with people – if you can find that in a very real way, that’s what it takes to be a blue man. You can learn how to play the music, learn the skills the blue man has, but it’s harder to find the essence in yourself.
Finally, are all blue men bald?
Meridian: No, I do shave my head, but I’ve been doing that since before I was a member of the group, but most blue men have a healthy head of hair.
April 18 to 22
du Forum, Yas Island, Abu Dhabi, Tue and Wed 7.30pm, Thur 6pm and 9pm, Fri and Sat 5pm and 8pm, Dhs195 to Dhs695. Tel: (02) 5098143. Taxi: du Forum. Click here to buy tickets

Culture
News
Nightlife
Theatre
Things to do
EDITOR’S PICKS
13 Sheikh Hamdan-approved restaurants in Dubai
READ MORE
Dubai brunches temporarily banned in new preventative measures
READ MORE
12 upcoming Dubai mega-projects we can't wait for
READ MORE
16 of the best beach bars in Dubai for sundowners
READ MORE
MOST POPULAR
Enjoy brunch, breakfast and a stay at Westin Abu Dhabi from Dhs432
Get a free gym class at this cool new Dubai gym
Pics of the week: Your best photos of the UAE
Emirates Airlines and DHA to implement digital verification of traveller medical records
7 of the tastiest breakfast burgers, buns and baps in Dubai
YOU SHOULD CHECK OUT
Our website uses cookies and other similar technologies to improve our site and your online experience. By continuing to use our website you consent to cookies being used. Read our privacy policy here.